If the City of Houston missed your regularly scheduled recycling or trash pick-up this year, consider the time its fleet spent in the shop rather than on the road. 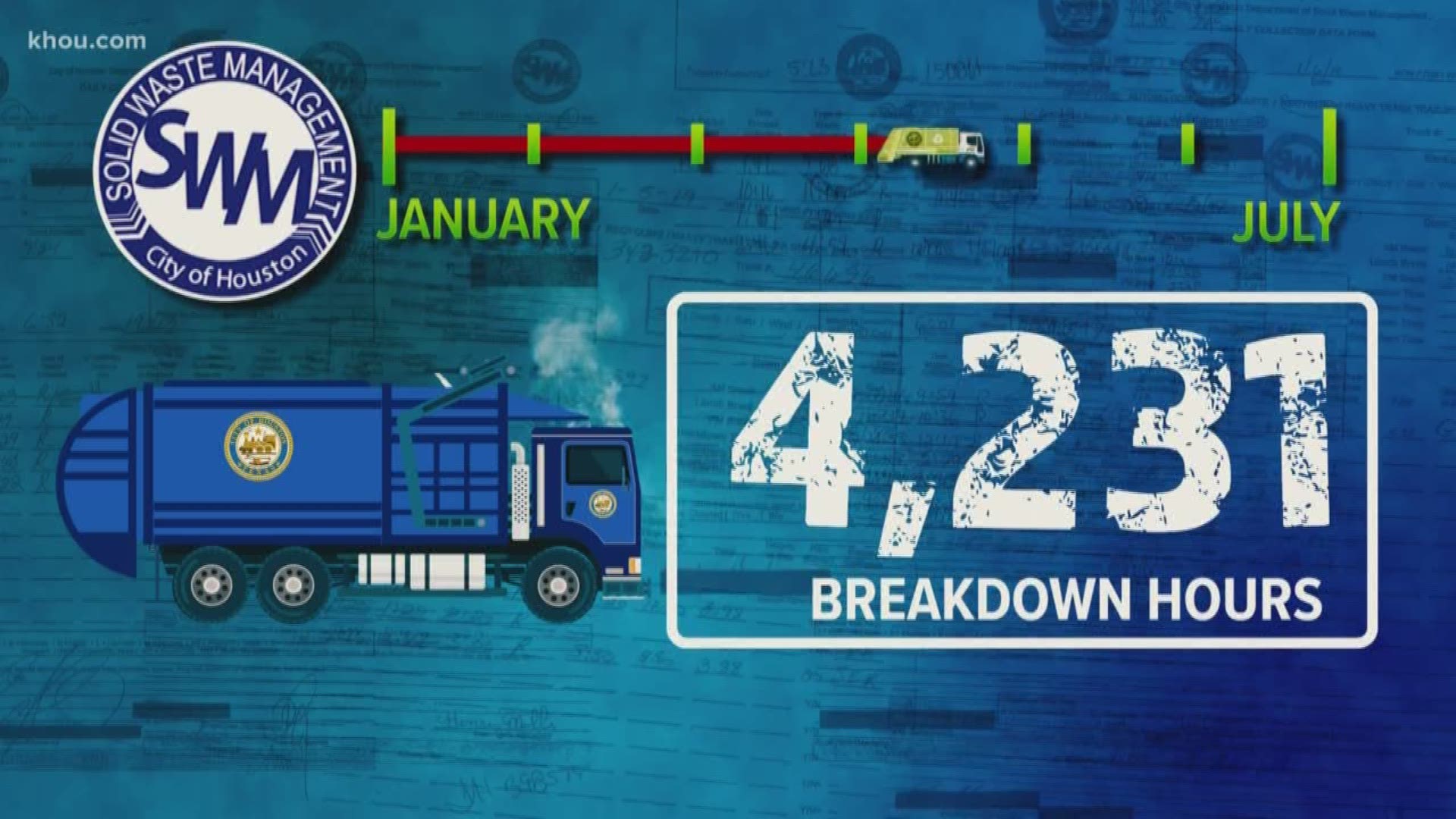 HOUSTON — Update: The Houston Solid Waste Management Department didn't respond to KHOU's requests for comment before this story aired. But the following day, July 31, Director Harry Hayes released a statement on social media. Read it below.

If the City of Houston missed your regularly scheduled recycling or trash pick-up this year, consider the time its fleet spent in the shop rather than on the road.

The Solid Waste Management Department logged 4,231 breakdown hours on its fleet from January to July.

City records reveal a wide range of problems from radiator leaks, hydraulic leaks and engines that leak oil, to busted hoses and trucks dangerously shutting down on the freeway.

Drivers noted the problems in handwritten daily logs. One employee pleaded to get the "fix right" and "get the issues over with." Another requested his truck be taken to "outside service quickly" to make repairs.

Records show the worst part of town for trucks going down is the southeast side, which logged 1,424 breakdown hours for the first half of the year.

One of the most alarming cases was Memorial Day week when truck 44512 broke down every day, according to the driver’s daily logs.

It was not just one breakdown per day, but three times that Tuesday, three times on Wednesday when "the truck started smoking," and four times on Thursday and Friday.

Victor Ayers, director of the Houston Fleet Management Division, declined to comment through a spokesperson.

"Our leadership has expressed that our department is in the peak of its busy season and will not have time to accommodate a (city garage) walk-through for footage or interview at this time," Deputy Assistant Director Marchelle Cain said in an e-mail.

The Houston Solid Waste Management Department did not respond to e-mails asking for information on whether the city has purchased new trucks and, if so, how many and when they will arrive.

Director Harry Hayes released a statement on social media that says, in part:

“The Administration, having properly addressed other decades-old deferred financial and operational issues, has undertaken an equipment replacement program for the Solid Waste Management Department, investing over $26 million since last spring. The investment will replace more than 155 operating units. Since January of this year, nearly 40 units have been received and placed in service. 14 units are scheduled to arrive this month, July, with another 69 arriving through the end of November. The final order from the $26 million capital infusion will be ordered by August 1st of this year and arrive in early spring 2020.”

Records show repairs for breakdown and driver-reported problems totaled $1.9 million from January to July. That amount is nearly half of $3.9 million the city spent on all maintenance for its fleet of solid waste trucks.

The out-of-service numbers add to the problems of an agency already embroiled in controversy for its recycling program. KHOU 11 Investigates analyzed city data and discovered at least 2.6 million pounds of recyclables were sent to the dump from January to June.

An internal city audit on the policy violations is expected to be completed soon.