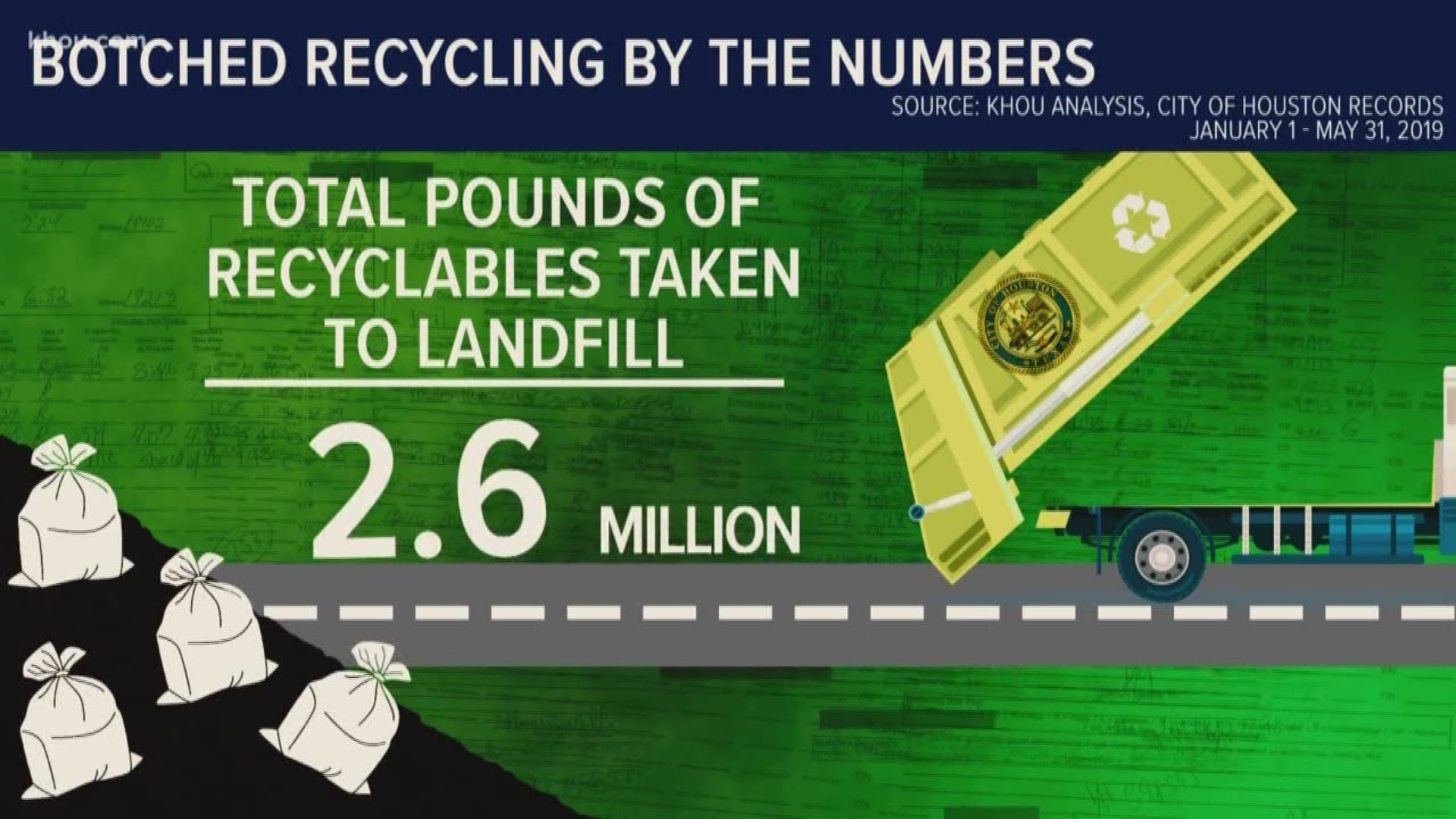 HOUSTON — The City of Houston broke its own recycling rules more than 300 times this year and sent at least 2.6 million pounds of curbside recyclables to the landfill, according to a KHOU 11 analysis of city records.

“You either terminate the leadership or you make changes,” said Brenda Stardig, District A council member who represents Spring Branch. “In my world, coming from the private sector, this would be a failed business at this point.”

Credit: KHOU
These daily collection data forms by Houston's Solid Waste Management show the type of material collected and the disposal site. KHOU 11 Investigates used these forms to find that 2.6 million pounds of recyclable material had been dumped in landfills.

KHOU 11 Investigates obtained daily collection data forms from the Solid Waste Department from January 1 through the end of May. The daily logs are filled out by each truck driver and show the type of material collected, the times it was collected, and the disposal site for each load.

Those forms, cross-referenced with a database of corresponding landfill logs, reveal a city-wide, system-wide pattern of recycling violations.

At least 123 city trucks dumped 333 loads or partial loads of recyclables at a landfill or garbage transfer facility, which ultimately sends materials to a landfill.

Records also reveal that 28 loads ended up at the landfill after Mayor Sylvester Turner ordered the Solid Waste Department to send out an agency-wide memo to employees. The April 24 directive threatened “immediate disciplinary action” if policy was violated.

“It’s insane, I just can’t believe this is happening,” said Michael Kubosh, Houston City Council Member At Large. “He says to cease this and yet it’s still occurring.

“We’ve got to do better. These are core services. This is what government does.”

Some residents in the Tanglewilde neighborhood are disheartened with their local government. The west Houston community is where KHOU 11 cameras first captured a city truck mixing green-bin recyclables with black-bin garbage and hauling it all off to the landfill.

“If it’s all going to the landfill, why bother even doing it?” said Bruce Lowther.

“I want to know why they’re lying about helping the environment by dumping it in the trash,” said resident Elizabeth Anderson.

“It pisses me off,” said Glenn Chasse, who believes upper-level city managers are to blame. “It’s coming from above, there’s a problem above.”

Hayes, the head of the city’s recycling program, declined an on-camera interview request. He said his agency is less than two weeks away from completing an internal audit and will comment once that report is final.

On the phone, Hayes said that “everyone will be held accountable,” including himself.