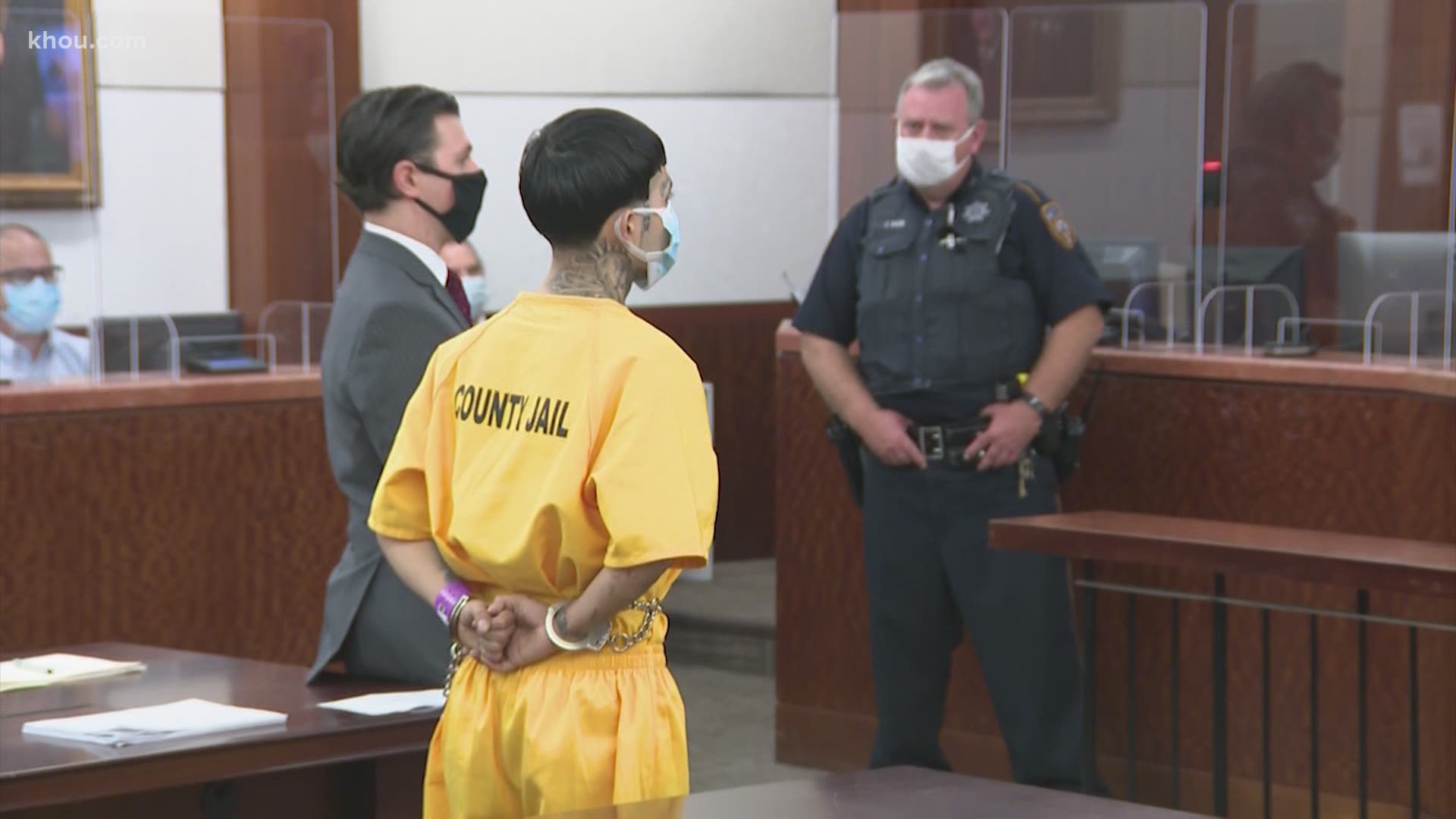 HOUSTON — The man charged with murder in connection with the death of Houston Police Department Sgt. Sean Rios appeared in court on Wednesday afternoon. A judge set his bond at $500,000.

Robert Soliz, 24, has been charged with murder after Rios, 47, was shot to death Monday. Soliz was arrested on Tuesday.

Thursday morning, Soliz appeared in court on two new charges of aggravated assault with a deadly weapon for two separate prior incidents. One happened in January and the other happened in October.

According to the probable cause argument made by prosecutors on Wednesday, witnesses told police that Soliz and Rios got into a shootout at a business near the Taj Inn Suites just off the North Freeway. A prosecutor said Soliz was inside the shop shooting at Rios and Rios was firing back at Soliz.

After being wounded, Rios retreated to the motel, where he died. It's unclear what led up to the shooting.

After the shooting, according to the prosecutor, Soliz drove his car to a transmission shop that belonged to a family member. The prosecutor said he told his family member he was shot at on the freeway and left his car there. Prosecutors said Soliz left the shop with a man in a black Chevy truck.

Prosecutors said video surveillance captured Soliz and the other man talking about the shooting. Prosecutors said the video recorded Soliz saying "my (expletive) jammed," and "he almost hit me."

Police are searching for the driver of the truck who was seen talking to Soliz after the shooting and then leaving with him from the shop. They're calling him an "extreme person of interest" and want to find him as soon as possible.

Surveillance video of that encounter is below. Anyone with information is asked to call the HPD Special Investigations Unit at 713-308-3600 or Crime Stoppers at 713-222-TIPS. Police said the person of interest was driving a black Chevy truck.

Funeral arrangements for Rios have been set, according to Houston Police Chief Art Acevedo. A viewing is scheduled for Tuesday, Nov. 17 and the memorial service will be held Wednesday, Nov. 18.

The time and location for both events were not immediately given.

The attorney representing Soliz on Wednesday said he wants another agency to investigate the incident due to a conflict of interest. Since Rios was an HPD officer, he says that another agency such as the Texas Rangers or Harris County Sheriff's Office should conduct the investigation.

He says there's not enough evidence to arrest Soliz at this time because HPD has made a lot of assumptions in the investigation so far.

The attorney said, according to his knowledge, Soliz and Rios did not know each other and had not encountered each other before Monday's deadly incident.

The attorney claimed that he told police that he was taking Soliz to turn himself in on Tuesday. He said the police intercepted them on the way and arrested Soliz during a traffic stop on the Katy Freeway.

He also said he's known Soliz's family since the 24-year-old was an infant. He said Soliz's aunt was his paralegal at one point in time.

"The Houston Police Department is aware of the concerns raised by the defense attorney representing the suspect charged in the shooting death of Sergeant Sean Rios. Our department is committed to conducting a fair, thorough, and impartial investigation. Moreover, the Civil Rights Division of the Harris County District Attorney’s Office is conducting a parallel, independent investigation."

Soliz has been arrested multiple times since 2014.

According to court documents, he has been charged with making a terroristic threat, the unlawful carrying of a weapon, evading arrest, possession of marijuana and trespassing.

KHOU 11 learned that he had several bond forfeitures and he failed to surrender to begin his sentence in 2018.

His latest arrest happened this year after a gun was found in his vehicle, according to court records. His bond was set at $100 in that case.

Also during the probable cause hearing on Wednesday, prosecutors said Soliz may be facing additional charges for other cases he may be involved in. One is a possible road rage incident.