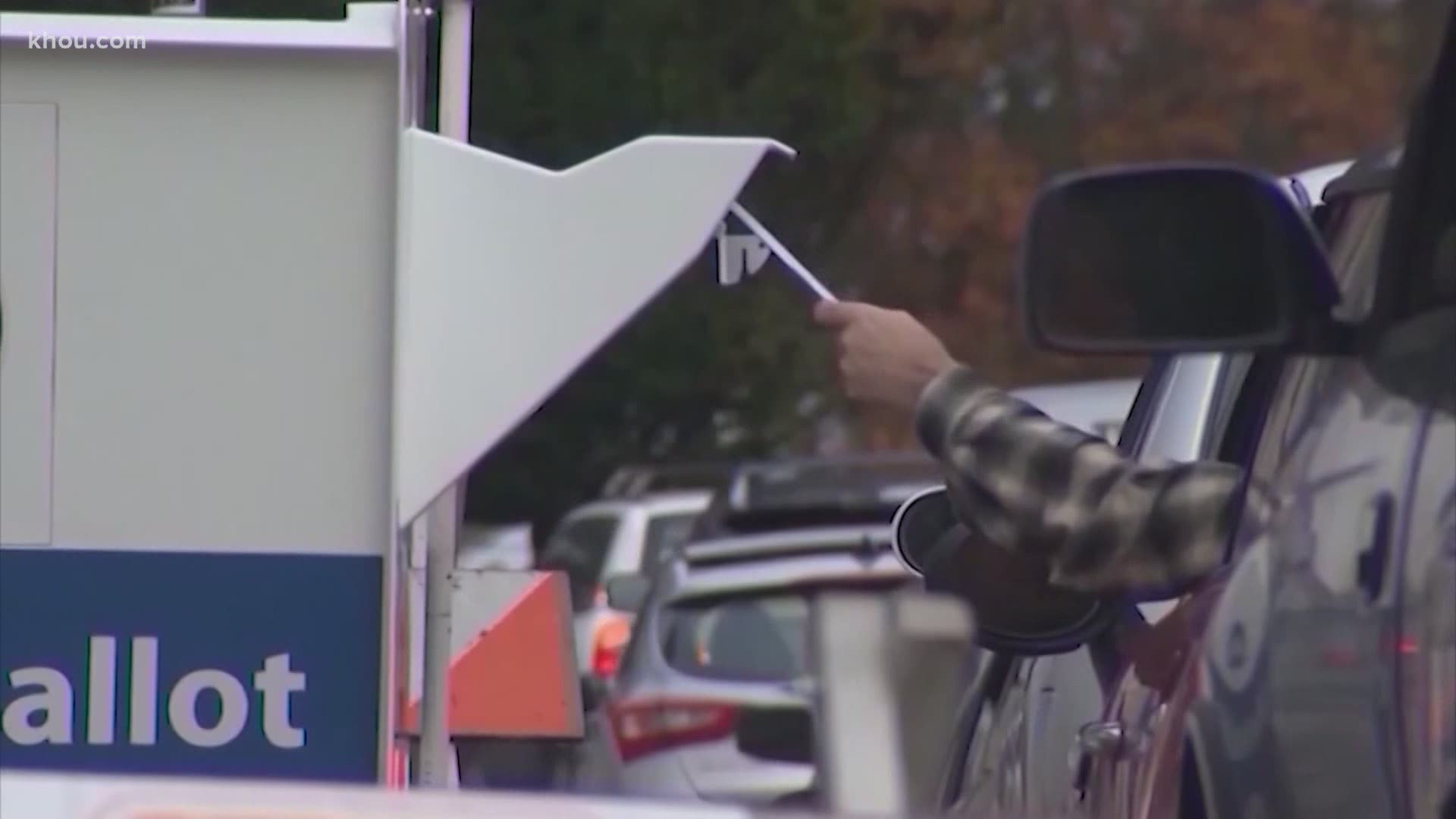 The Harris County clerk calls a proclamation from Gov. Greg Abbott that limits where mail-in ballots can be dropped off as being “prejudicial and dangerous.”

“Harris County is bigger than the state of Rhode Island, and we're supposed to have one site? This isn't security, it's suppression,” Hidalgo said in a tweet Thursday. “Mail ballot voters shouldn't have to drive 30 miles to drop off their ballot, or rely on a mail system that’s facing cutbacks.”

There were 12 locations accepting ballots in Harris County.

“At the last minute to be making this decision, is very clearly about confusing people and about suppressing the vote," Hidalgo said.

She said having more locations makes sense during the pandemic.

“Our county is the size of Rhode Island in land mass. It’s the size of Colorado almost in population, and having just one mail-in ballot drop off location is just ridiculous," Hidalgo said.

In Harris County, this would mean closing 11 drop-off locations.

"Growing up, I was bused over 20 miles as a student in the first integrated class at Klein High School. Because of the Governor's decision today, I would now have to go even farther to drop off an absentee ballot and make sure my vote is counted,” Houston Mayor Sylvester Turner said in a statement Thursday afternoon. "Harris County is the 3rd largest county in the United States, and Houston is the 4th largest city in the country. Reducing the number of mail-in ballot drop-off sites from 11 to one is a direct attempt at voter suppression.”

In addition to limiting drop-off sites, early voting clerks are required to allow poll watchers to supervise any activity related to the in-person delivery of mail ballots at the designated location. They must act as if they're serving at an early voting polling place.

"The State of Texas has a duty to voters to maintain the integrity of our elections," Abbott said in a press release. "As we work to preserve Texans’ ability to vote during the COVID-19 pandemic, we must take extra care to strengthen ballot security protocols throughout the state. These enhanced security protocols will ensure greater transparency and will help stop attempts at illegal voting."

“The Governor's previous proclamation gave voters more options to vote safely during the global pandemic and alleviated concerns over mail delivery to ensure that every vote is counted. I applauded that proclamation.

Going back on his word at this point harms voters and will result in widespread confusion and voter suppression. Many mail ballots have already been dropped off by voters across Harris County, and multiple drop-off locations have been advertised for weeks.

Our office is more than willing to accommodate poll watchers at mail ballot drop-off locations. But to force hundreds of thousands of seniors and voters with disabilities to use a single drop-off location in a county that stretches over nearly 2,000 square miles is prejudicial and dangerous."

The one drop-off location will be NRG Arena. Harris County Clerk Chris Hollins issued a statement saying he welcomes poll watchers and plans to hold a press conference Friday morning.

State Sen. Paul Bettencourt said he personally spoke to the governor Thursday and applauds the move.

“What he said in the order is what the law is and has been in the State of Texas., that you’ve got one drop off point per county, and you’ve got poll watchers that can observe," Bettencourt said.

He said it’s not voter suppression; it’s a law Democrats in Harris County have done well under in past elections.

Other groups, like Progress Texas, have also claimed Gov. Abbott's proclamation is an act of voter suppression.

“There’s no legitimate reason to close satellite drop-off locations,” Progress Texas communications manager Wesley Story said in a statement. “This is a blatant attempt by Gov. Abbott to suppress voters because the Texas GOP is afraid of the ballot box. Harris County alone has close to five million residents, and to suggest that one drop off site is sufficient is complete nonsense. Our votes matter now more than ever, and politicians cannot be allowed to stop Texas voters from casting their ballots in this election.”

“In the middle of a deadly pandemic, why on earth would Governor Abbott make it harder for people to cast their ballots? This is ridiculous," Garcia said in a statement Thursday afternoon.

“Harris County is the third largest county in the United States; with a population of more than 4.5 million, it has more residents than 25 states. Governor Abbott’s proclamation designating only one location per county to drop off mail ballots is voter suppression in action. The right to vote is sacred. As the late Congressman John Lewis often reminded us, it is the single most powerful tool we have in a democratic society. Especially during this pandemic, our elected officials should be making it easier, not harder, for voters to cast their ballots safely and to participate in our democracy.”

Read the governor's full proclamation below: