In addition to the 4-legged friends, dozens of counselors are present at the school to offer help, including Dr. Julie Kaplow, founder of Santa Fe Resiliency Center. 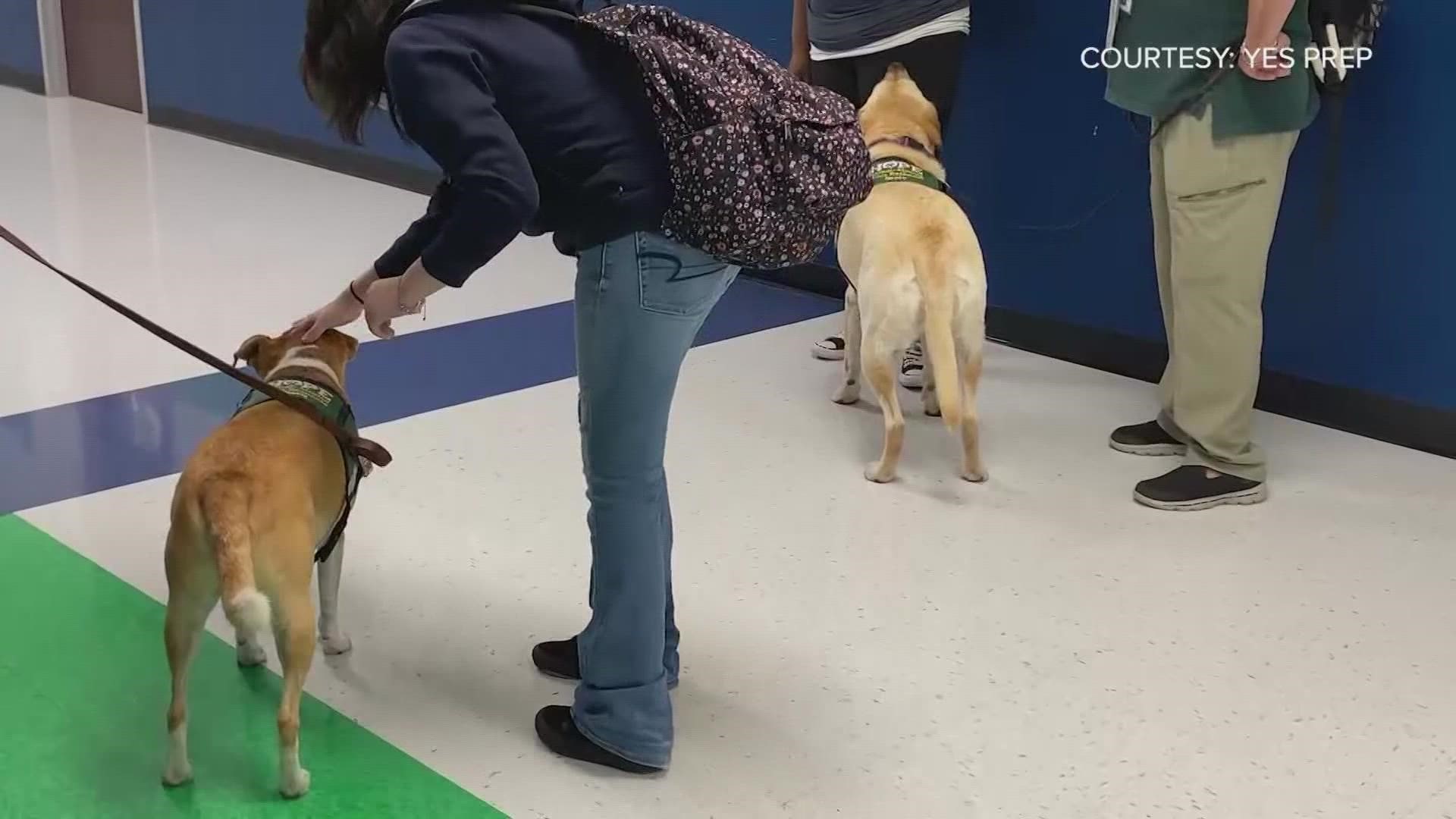 HOUSTON — This was no ordinary school day for YES Prep Southwest students. After taking a week off due to a shooting inside the school, students returned to the campus, not to focus on schoolwork, but to heal.

Therapy dogs Rebal, Grace, Gus and Pickle Juice — all with Hope Animal-Assisted Crisis Response — were on campus to provide comfort to students still shaken by the Oct. 1 shooting that injured principal Eric Espinoza.

"Sad, angry, upset," said 7th grader Lucia Perez about the range of emotions they are experiencing. “Saying how did you feel the day it happened, and how do you feel right now?”

In addition to the four-legged friends, dozens of counselors are present at the school to offer help, including Dr. Julie Kaplow, founder of Santa Fe Resiliency Center.

Students and staff were encouraged to wear green as a show of solidarity.

HOPE Animal-Assisted Crisis Response recently sent teams to that condo collapse site in Florida and also responded to a mass shooting in Colorado.

Today, students @YESPrep SW returned to school more than a wk after a former student opened fire & injured the principal.
This morning we met up w/ 4 therapy dogs & handlers w/ ‘Hope Animal-Assisted Crisis Reponse’ — who will be on campus to bring comfort to students. @KHOU pic.twitter.com/6RnYJrWr2S

“We were there last week, Wednesday and Thursday, for the staff – and we were there both days and they truly loved having us there," said HOPE's Jeanne M. Hooke.

Principal Eric Espinoza is recovering after being shot in the lower back when he confronted the accused gunman, 25-year-old Dexter Kelsey.

“Take advantage of the support available to you and let’s all recover from this experience," Espinoza wrote Friday in a letter to the school community.

Fortunately, no one else was injured in this shooting, but the emotional and mental scars could be permanent.

The 4 therapy dogs that’ll be on campus bringing a smile to students faces — Rebel, Grace, Gus, and Pickle Juice. These dogs and their handlers have traveled all across the state and country to provide comfort & encouragement during crises & disasters. @KHOU pic.twitter.com/lmLBa3dGde

“It’s traumatic to go through this and certainly there’s a good possibility that feeling of shock is still with them,” KHOU Mental Health Expert Bill Prasad said. “At times they will be hyper-vigilant, meaning that maybe a noise, a bang, might startle them.”

Kelsey, a disgruntled former student whose target was allegedly another staff member, remains locked up on aggravated assault and deadly conduct charges.

Kelsey has been charged with deadly conduct and aggravated assault against a public servant. According to a law enforcement source, Kelsey confessed to the shooting, telling police he was hearing voices and was not after the principal, but rather a different staff member.

He's being held on bonds totaling more than $5 million.