The sign, which we're told was hanging on the University of Kentucky campus, has been taken down 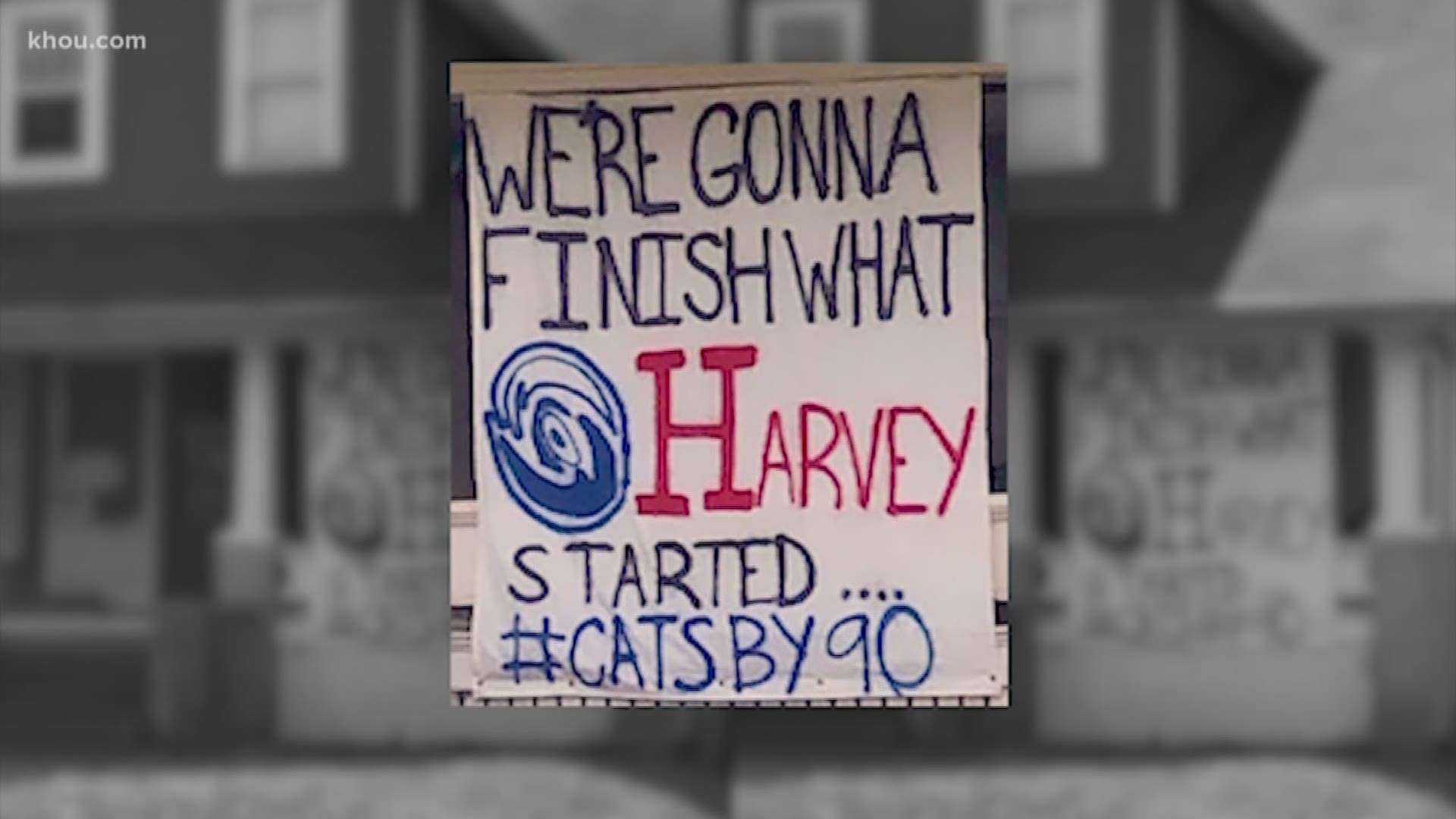 LEXINGTON, Kentucky — A photo of a sign seen on the University of Kentucky's campus is going viral, and some Twitter users are not happy about it.

The homemade sign hangs from a two-story home and reads, "We're going to finish what Harvey started....#CatsBy90"

The University of Houston Cougars men's basketball team is taking on the Kentucky Wildcats Friday night in the Sweet 16.

The sign suggests the Wildcats will beat the Cougars by 90 points and points to Hurricane Harvey - the deadly storm that devastated the city in August 2017.

The photo of the sign has been making the rounds online all day on Friday.

The photo was tweeted by a college student in Kentucky, and the online backlash to it is growing.

KHOU 11 News connected with the student who initially shared the photo. KHOU is choosing not to identify that student because they did not create the sign, nor do they live at the house where the sign hung. They posted a photo after walking past the home.

"The sign was out front of my neighbor’s house. I didn’t make it. But I’d seen it when I was leaving," said the University of Kentucky student. "There’s a lot of houses that always put signs up. They always do it for basketball games and football games, before the big games."

In the tweet, she wrote, "Well that was pretty savage @BarstoolUK @BarstoolCoogs"

"I wish that I hadn’t said it was savage," the student said. "It was definitely a mistake posting it."

Some Twitter users came to her defense on Friday.

"The sign isn't hers. She just saw it," tweeted @ethan_gurka.

"It wasn't her sign. It was a house across from here. Poorly worded tweet, but it wasn't her actions. Don't take it out on her, find the people who made the sign. Just putting it out there she did not make the sign... yes she shoulda called them out."

"Now that's funny! I'm a UH fan, not a Kentucky fan," wrote Drew Joseph. "But I'm not one to get my feelings hurt! That was clever and funny to rile their team up!"

Shane Patterson offered this perspective.  "Harvey started bringing Houston together so let's get it."

And Paige Remington reminded us, "we haven't even finished what Harvey started."