His supporters believe it will benefit them and their communities but some feel these rollbacks won’t help prevent future accidents from taking place. 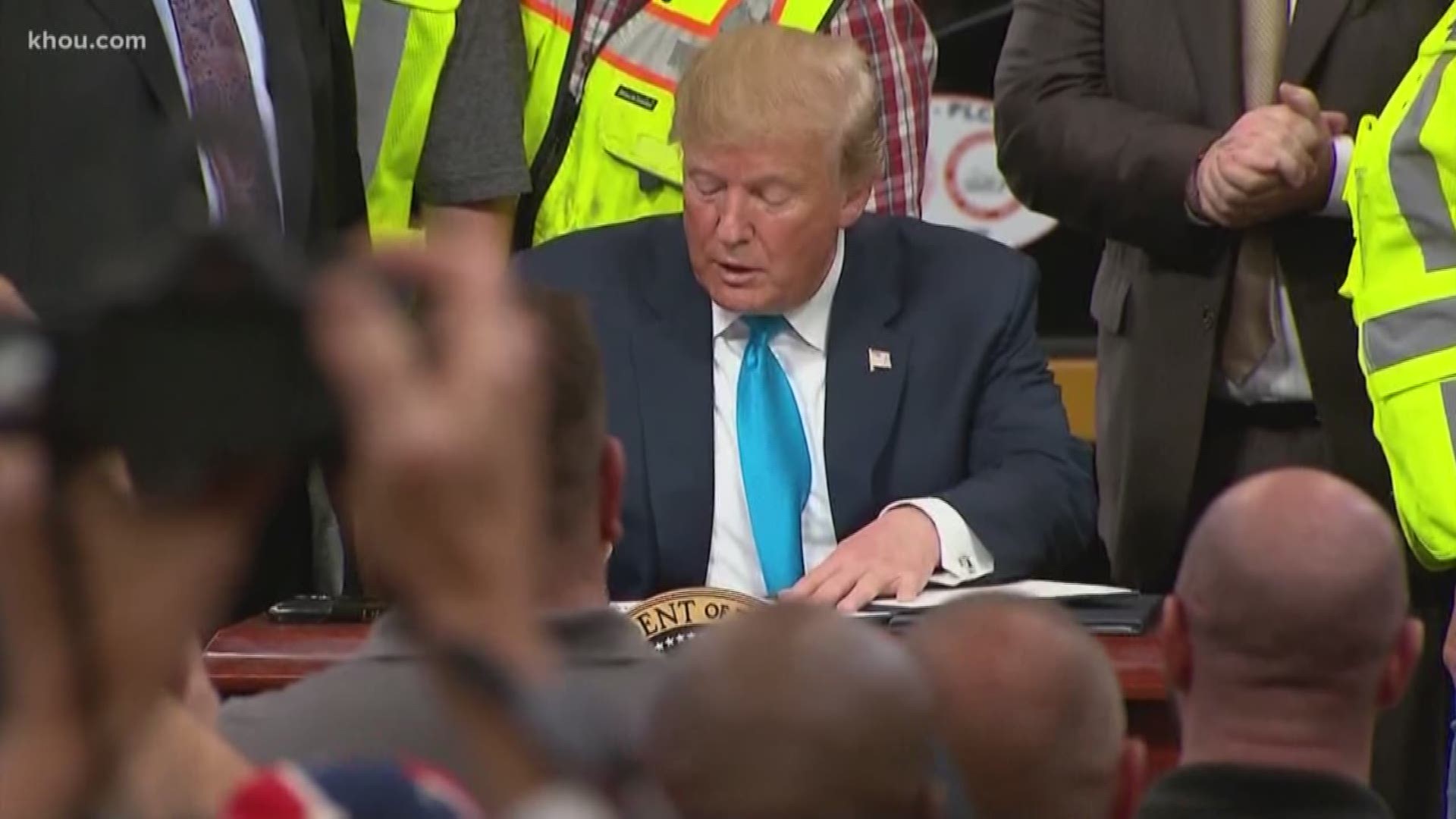 CROSBY, Texas — President Trump’s stop in Crosby was filled with fanfare from the community who was excited to see the 45th president of the United States.

However, for the President it was all business.

One order will speed up the process for approving vital infrastructure at the nation’s borders such as oil pipelines, road and railways.

The other modernizes rules and improves access for regulators.

The President said people will be able to work better under these new rules.

His supporters believe it will benefit them and their communities but some feel these rollbacks won’t help prevent future accidents from taking place.

RELATED: How Trump's oil, gas deregulation could help or hurt the Houston-area

He is using his power to make it easier for oil and gas to cut through the red tape.

The President said, “The two executive orders that I’ll be signing in just a moment will fix this dramatically accelerating energy infrastructure approvals so we’re going to get these approvals done quickly.”

His historic visit to Crosby has residents of the small town thinking of a bright future.

Dan Meaux, owner of the Crawfish Shack said, “It’s definitely needed and obviously Houston and Texas benefits from this because we’re the leader in the industry for our country so it’s a big plus for our area.”

Meaux said changes to regulations will help create jobs that drive people to communities like Crosby.

“As Houston grows it grows outward and we’re on the edges of it so the development will continue to come to this area so it’s beneficial for the whole area.”

However, Elena Craft, senior director of the Environmental Defense Fund said, the President’s announcement is a punch in the gut to the communities who live with the pollution day in and day out.

Craft sees it as a step in the wrong direction especially for towns like Crosby that just dealt with the KMCO explosion last week.

“President Trump’s executive orders today continue his long, sad record of trying to prop up the dirtiest sources of energy in spite of market needs, risks to human health and the environment, and common senseIt,” Craft said. “It’s especially egregious that he made today’s announcement in Crosby, Texas – a place that just saw two environmental disasters after Trump rolled back the safeguards that could have prevented them.”

She added, “Crosby’s experiences show the recklessness of the Trump administration’s deregulation agenda. With today’s executive orders, Trump is trying to make it harder for states to protect people. This will put Americans in more danger for no good reason.”

While the exact impact is unknown some residents like Scott Stephens are confident the President’s actions will make their lives easier and better.

Stephens said, “He just made it a lot easier today allowing for permits to be easier to obtain which will create construction jobs. The economy is going to boom on that part of the sector.”

As part of his executive order the President will be the only one to have the power to make a final decision when oil and gas companies get caught up in problems.

The President said the process of issues permits will take no longer than 60 days.