Man accidentally shoots himself in the heart with nail gun

A 3-inch framing nail was pulled from the man after having his chest cracked up during emergency surgery. 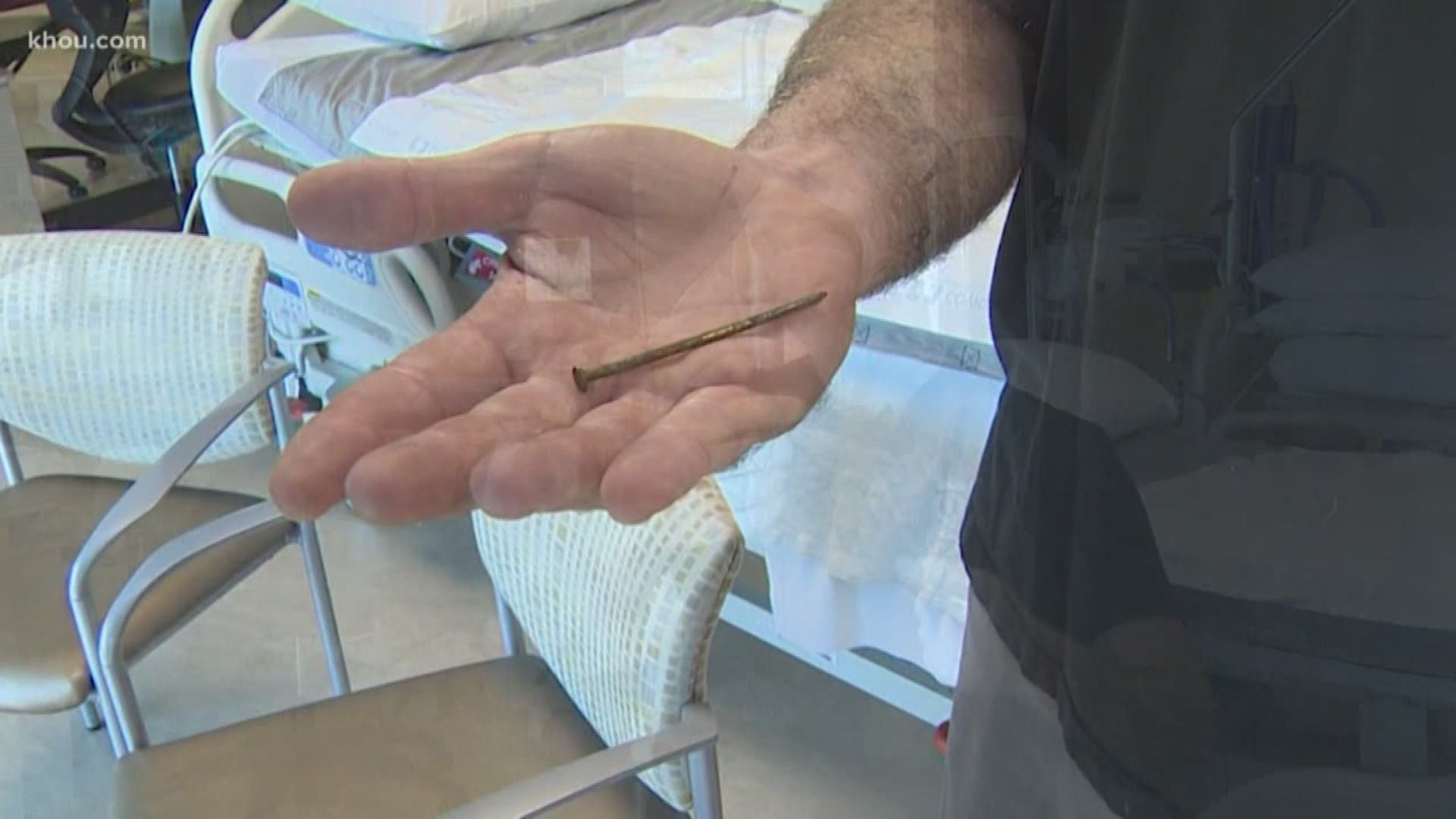 THE WOODLANDS, Texas — A Montgomery County carpenter and furniture maker shot himself in the heart with a nail gun before being saved at a Woodlands trauma center where his wife works.

The accident happened on Sept. 3 about 20 minutes north of The Woodlands.

A picture of Aaron working shows he’s no stranger to tools and machinery. However, a freak accident last month goes to show anything can happen.

Aaron said he was doing framework when the hose of his nail gun got stuck.

When he went to move it, the nail gun shot a 3-inch nail into his heart.

“You know it was a foot from me probably when it went off and the nail went in all the way to the head of it,” Aaron said. “I reached down, pulled the nail out, put my hand up and thought, ‘I’m going to die.’”

A friend who was working with him called 911. In the 911 call, Aaron’s friend said, “My boss just shot a framing nail into his heart. His eyes are rolling back in his head.”

He also called Aaron’s wife Liz who was working in the trauma center at Memorial Hermann in The Woodlands.

“It was 40 minutes from the time that the accident occurred until he arrived at the hospital, so I can say that was the longest 40 minutes of my life,” Liz said.

Trauma Medical Director Dr. Timothy Hodges said the trauma team was activated when they knew Aaron was headed their way.

Dr. Hodges doesn’t recommend removing the nail, but in this case, it saved Aaron’s life.

He said this surgery was tougher than others for many reasons.

“When Dr. Hodges walked through the door and hugged me and told me that he was out and that he was doing fine, that’s when I knew that Aaron was going to be OK," Liz said.

Aaron said all of the right pieces fell together that day to save his life.

“The best of the best was all there that day and was able to take care of me. From the ambulance drivers who did amazing jobs to everybody who was in the surgery,” he said.

Aaron is back at work and has even handled this nail gun again, which is something his wife didn’t know about.

Memorial Hermann officials believe having a trauma center in the area also contributed to saving Aaron’s life. They said before the trauma center patients would have been flown to the Medical Center.