It's always so hot this time of year, our overnight temperatures remain warm as well. 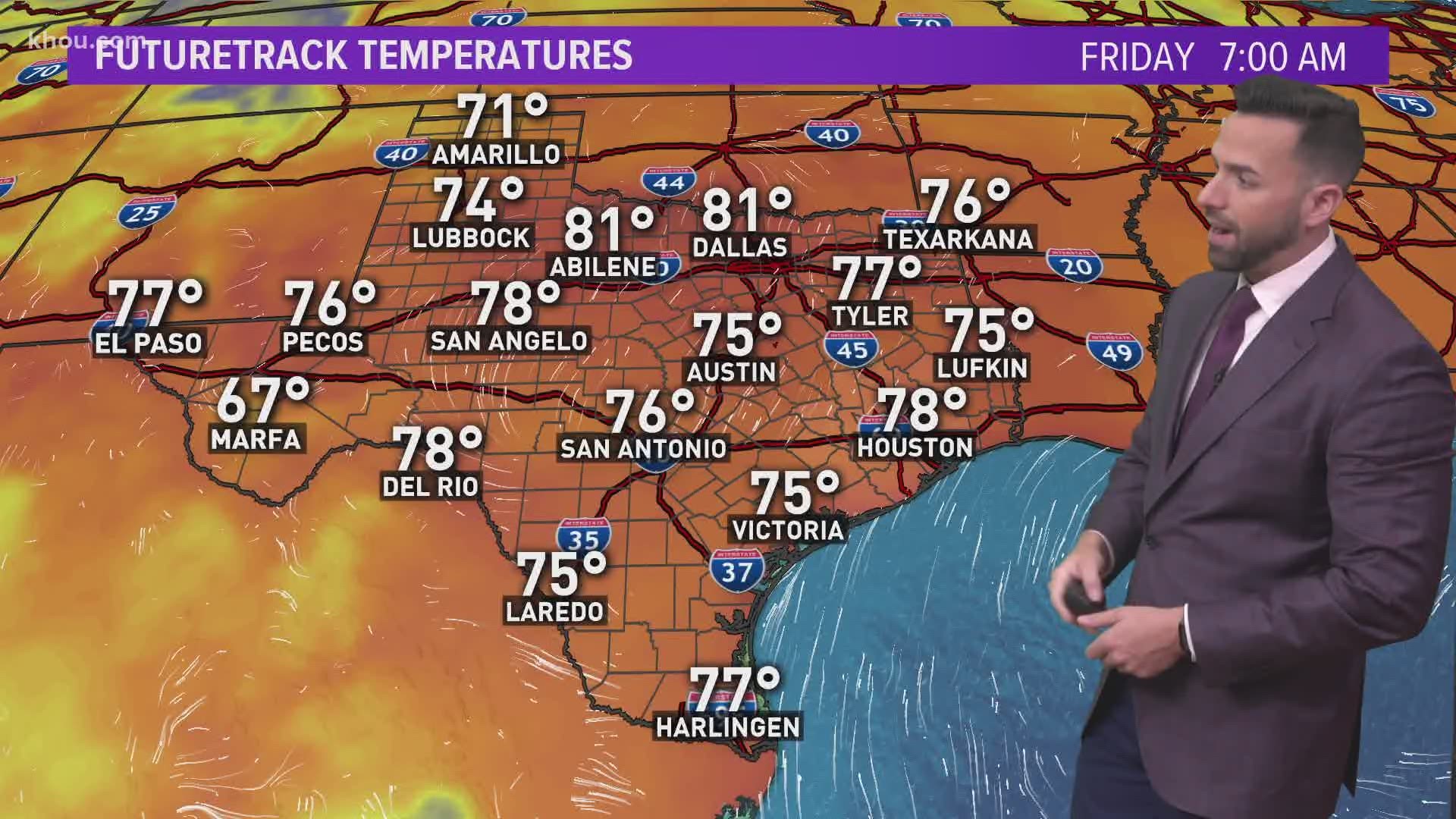 HOUSTON — Houston's high temperature on Friday Eve (Thursday) was 99°F. So while we didn't officially hit the triple digits, pfft, what difference does it make? It all feels the same at this point. So if hitting 100° makes you happy, by all means, go with that.

There is no change in the on-going forecast for your finally Friday and the weekend. Each of the next three days will be capable of temperatures hitting or exceeding 100°. Again, even if we come up short by a degree or two, it's still going to be a sizzler so just take it easy.

We introduce a small chance of rain on Sunday afternoon with bigger rain chances on Monday. In fact, some isolated heavy downpours will be possible, if not likely, come Monday afternoon.

That doesn't last long as we quickly dry out and return to mostly sunny skies with temps in the low to mid 90s. Over the next 6-10 days, models do indicate a slight cool down but it's only slight. We're talking about dropping our highs from near 100 degrees to more like 93 or 94. Hey, it's a start.

Our first legit Autumn cold fronts usually don't arrive until mid September at the earliest. Dr. Neil Frank used to always say September 20th was the average first big front. So we're about 6 weeks away from any noticeable cool down.

Sweater weather? Mmm, no but I'll snuggle anyway. Highs go from near 100 to low 90s by next week? Ok ok, I see u. Know what else I saw? Day 16, 1st strong cold front of Fall diving south. It's click bait but u should know better than to believe such nonsense 16 days out. #Hopeful pic.twitter.com/kMFNlEwqxT

HOWEVER, I spotted tonight for the first time that some models bring the first significant cold front into the US heartland by the end of August. Early, extremely long range models show lows in the mid 60s here. Being that it is literally 16 days away, you have a better chance of seeing Elvis I think. Uhh huh.

Tropical Storm Josephine is forecast will move north of the Leeward Islands and will eventually turn north and go out to sea. While the storm may briefly become a healthy tropical storm, it is not forecast to affect any land areas and will dissipate as it moves east of the Bahamas--at least that's the forecast as of Thursday evening.

Recently, hurricane researchers at Colorado State University released their updated outlook for the 2020 season and are now calling for 24 named storms, 12 hurricanes and 5 major hurricanes (category 3 or higher).

By any measure, this is considered a hyperactive forecast that will keep meteorologists busy. If the above forecast is correct, we would be forced into the Greek Alphabet for only the second time in history. The last time, and only time we did, was in 2005. And we all remember how crazy that season was.  The 2020 season is looking to be nearly as active.

Remember, the number of storms does NOT equate to landfalls or impacts. Many storms that do form, are likely to remain at sea. We don't mind us having an active season, as long as we see more of those "fish storms" rather than storms that threaten the country or any populated land mass.