South Carolina was playing in the Final Four for just the third time in program history. 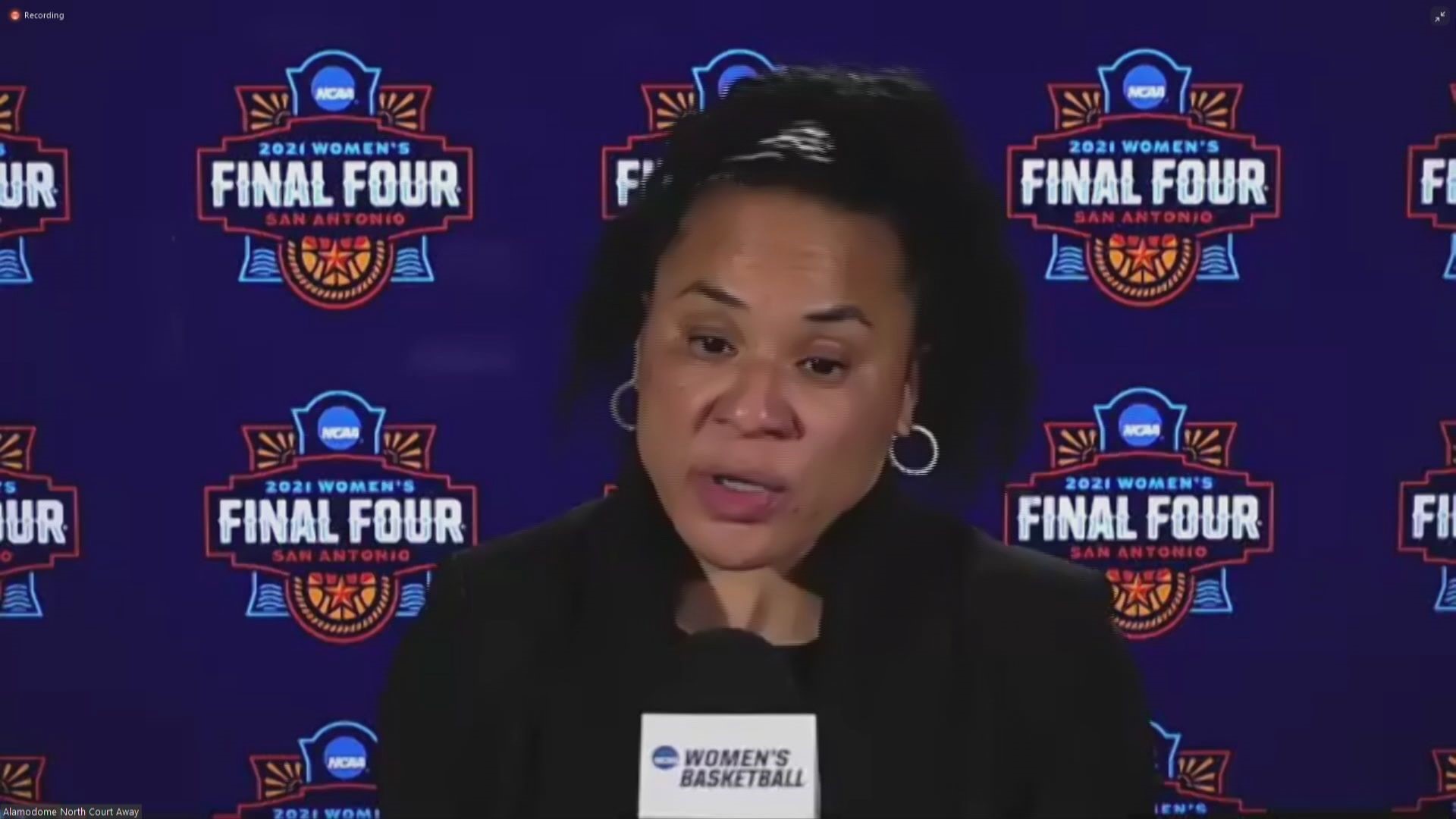 SAN ANTONIO — The South Carolina Gamecocks missed two chances to score in the final seconds of the game as their season ended Friday night with a 66-65 loss to Stanford in the NCAA women's national semifinal game.

USC guard Brea Beal's layup with 3 second to go didn't fall in, and Aliyah Boston's putback attempt didn't fall either, and time expired allowing the Cardinal to move on to Sunday's finale.

"It's unfortunate that this setback will be an entire offseason, but we will get better," she said after the game. "We will get better so we can arm ourselves with what we need to reverse us losing basketball games in this moment."

The contest between the two number one seeds lived up to the billing, as it was a physical, skilled contest that went back and forth--right until the very end.

South Carolina (26-5) raced out to an early lead to start the game as the Gamecocks overpowered the Cardinals. Boston, USCs All-American, showed her full array of abilities, hitting a three and then a muscular, twisting shot in the paint to help her team get a 15-6 lead when the first TV timeout was taken at 4:49 in the first quarter.

South Carolina frustrated Stanford, forcing them out of their preferred game plans of screens plays and movement, and the Cardinal seemed frustrated early.

However, after that timeout, the Cardinal got their bearings, when Lexie Hull and Haley Jones hit back to back threes to spark a 7-0 run. A Kiana Williams jumper in the final seconds tied the score at 15-15 to end the first.

Zia Cooke led the Gamecocks with six points at that break. She'd double that total by halftime.

The Gamecocks shooting touch went cold in the second quarter. Stanford took advantage, going on a 16-2 run. A three-pointer by Cooke stopped the streak and gave the Gamecocks their first field goal in 9 minutes.

Another Cooke three with 2:50 in the second quarter cut the lead down to one.

While Boston wasn't as active offensively in the quarter, her presence was felt, as she had three blocks and clearly affected other shots that Stanford tried in close to the basket.

But an Ashten Prechtel three in the final 30 seconds gave Stanford a 31-25 halftime lead.

In the third South Carolina would use the long game to match the Cardinal, as Cooke hit three three-pointers and Destanni Henderson added another as the team outscored Stanford 24-21 in the quarter to only be behind 52-49 when it ended.

RELATED: Gamecocks may be nice off the court, an attacking and relentless unit on the court

Cooke had 23 points at that point to lead all scorers, with 11 in that quarter alone. She's finish with 25 points.

Foul trouble forced Boston to the bench with 8 minutes to go in the game. However, Staley managed her time well to keep her in the game, despite that impediment.

A missed kicked ball call against Stanford with less than two minutes led to an easy transition bucket for Stanford to go up three. But a three point play by Henderson cut the lead back to two with 1:09 left.

A Henderson three with 38 seconds to go gave USC a one point lead, 65-64, with :39 left. It was the Gamecocks first lead since it was 15-13 early in the game. She ended up scoring the team's last nine points.

Jones would answer for Stanford with a bucket from the baseline to go back up one.

Henderson then turned it over with :13 second to go. On Stanford's next possession, Boston stole the ball, and it wound up in Beal's hands. But after driving to the basket Beal missed a layup and Boston was unable to follow.

Boston was left in tears, but her teammates--and even two of Stanford's players--attempted to console her.

South Carolina was playing in the Final Four for just the third time in program history. The first was in 2016, then in 2017, when they broke through by winning their first national championship.

Stanford awaits the winner of Arizona and UConn in the other national semifinal game that was set for late Friday evening.

Due to the ongoing pandemic, the entire women's NCAA Tournament is being played at venues in one city, San Antonio, which had already been picked to host the Final Four.

GREAT SEASON!! South Carolina lost a heartbreaker, but that doesn't change the amazing season they had. Show them love Gamecock Nation! ❤️ pic.twitter.com/X5rfg8UbZE