The Fort Bend County sheriff's Facebook post about a pickup driver with a F__K Trump sign is sparking a heated debate across social media. Sheriff Troy Nehls shared a photo of the truck and a sign that reads "F__k Trump and F__k you for voting for him." 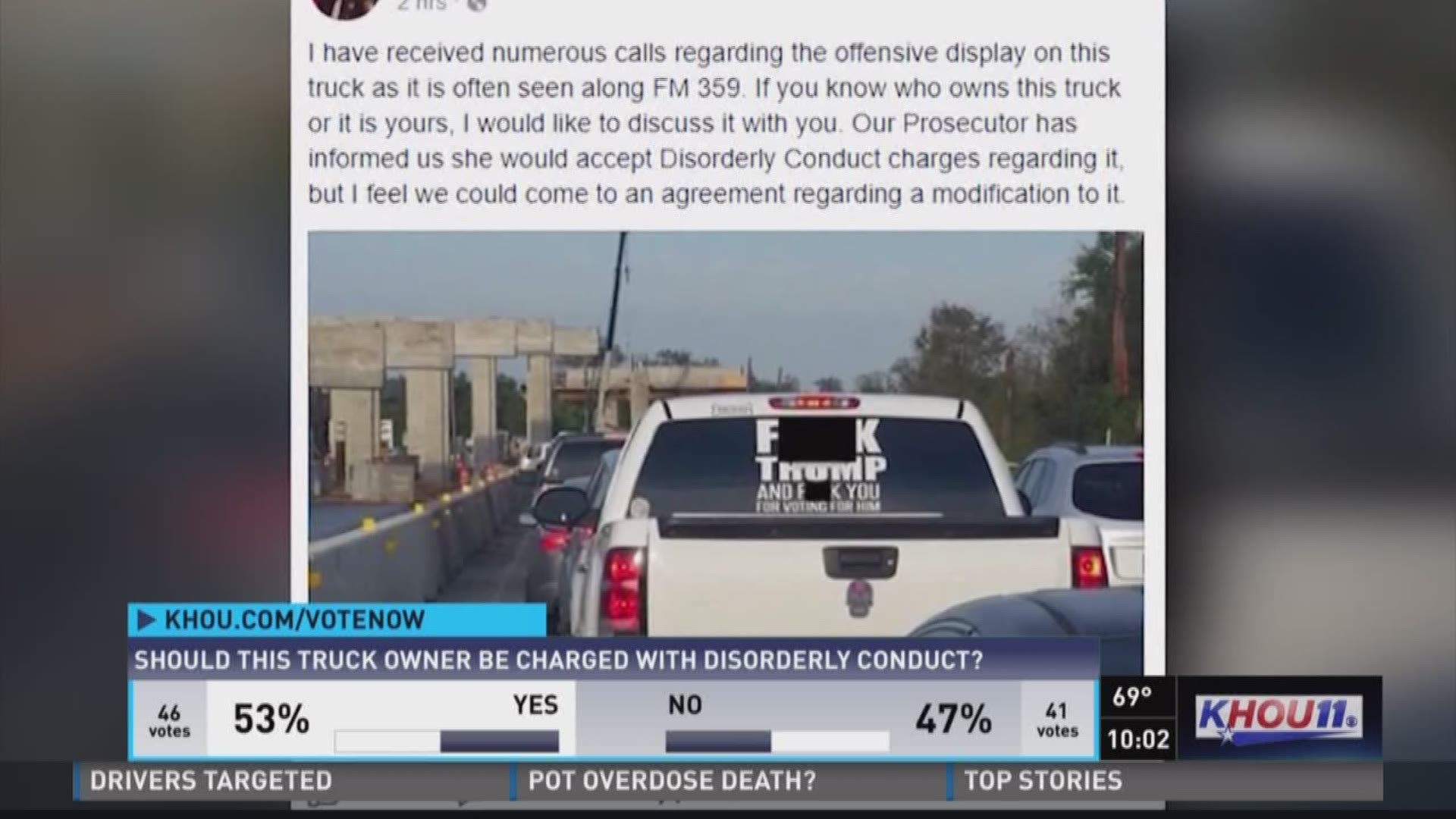 FORT BEND COUNTY, Texas -- The Fort Bend County sheriff's Facebook post about a pickup driver with a F__K Trump sign on his window is sparking a heated debate across social media.

Sheriff Troy Nehls posted a photo of the truck and a sign that reads "F__k Trump and F__k you for voting for him."

In his post, Nehls said there could be charges against the driver: "I have received numerous calls regarding the offensive display on this truck as it is often seen along FM 359. If you know who owns this truck or it is yours, I would like to discuss it with you. Our Prosecutor has informed us she would accept Disorderly Conduct charges regarding it, but I feel we could come to an agreement regarding a modification to it."

The post has thousands of comments and shares. Some followers agree the driver should face charges.

"I've seen this truck, and I would pleased if the owner of this vehicle was prosecuted for disorderly conduct. My children saw this, and I was infuriated they were subjected to this offensive display," wrote one mom.

But others are defending the truck owner's right to free speech.

"If the owner turns his or herself in and then faces charges, please tell me where I can contribute to a legal defense fund to help defend against these politically motivated charges," one man posted.

In response to the critics, Nehls posted the disorderly conduct law. It reads, in part, "Uses abusive, indecent, profane or vulgar language in a public place, and the language by its very utterance tends to incite an immediate breach of peace."

Nehls addressed the post in a press conference Wednesday afternoon.

"People have called and are offended by the language," said Nehls. "I simply want to talk to the owner and say 'Look the last thing we need to do is have anyone have any confrontation over the language on your truck.'"

KHOU 11 News tracked down the owners of the truck, Karen and Mike Fonseca. They are stunned and angry that Nehls would start this debate on Facebook instead of calling them personally.

They say they're entitled to their free speech.

"There's no law against freedom of speech, nothing in the law book here in Texas, I've been stopped numerous times, but they can't write me a ticket," said Karen Fonseca.

Her husband says the decal isn't coming off.

"No plans to take it down," said Mike. "Unless he can show me where it says that in the law book, it's not coming down until the weather takes it down or I replace it with something else."

He says the Sheriff never consulted him before posting the suggestion the driver may be charged with disorderly conduct.

He made it clear his office would not accept charges against that driver simply because of the profanity and message on the truck.

What do you think: Disorderly conduct or free speech? Tap here to join our Facebook debate.