Katy teens use talent to help community heal after Harvey

"It may have been one of the toughest things of my life, but I'm ending on such a high note," said Katy I.S.D. senior Ezrie King. "Because our community has grown so much closer." 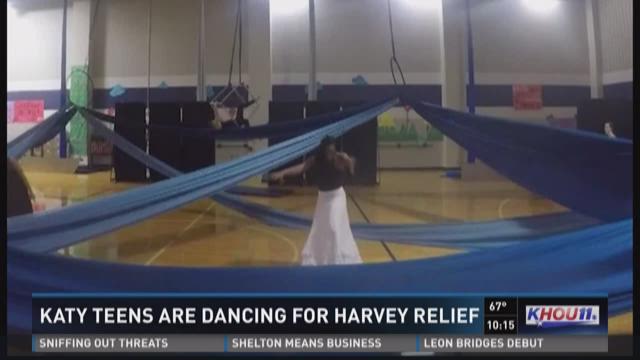 KATY, Texas - A group of teen girls are using their talent to help the community heal after Hurricane Harvey.

"We know how to gently bring people back into the memories," said high school senior Ezrie King.

King and her family were forced to evacuate their home during the August 2017 storm. King says her home took in 2 feet of water. The 17-year old girl says she lost everything but a trash bag full of clothing.

"We wanted to show how it felt when we were flooding," said Pacesetter team member Addy Aliaj. "Like, there was nowhere to go. You had to stay above the water."

The team, which is made up of four dozen high school sophomores, juniors and seniors, uses the stage along with rings and Lycra ribbons that are suspended from the ceiling.

The performance, Stronger Than the Storm, is choreographed to original music composed by David Michael Hyde. In the 45-minute routine, which has multiple acts, students express their stories and experiences through music, dance and aerial performances.

“Stronger than the Storm is a breathtaking, powerful show, both visually and musically,” said Darby Boyd Wiles, dance director for Taylor High School. “What makes it so poignant is that it tells all of our stories."

The show will be touring in various Katy and Houston-area communities between March and May of this year. Profits will be donated to Harvey victims.

"Because of my age, I haven’t been able to volunteer at a lot of places," said 16-year old Aliaj. "So I think this is a really good way for me to help out the community."

The THS Pacesetters are a national award-winning dance team, but Stronger Than the Storm was created for a more intimate, local audience.

"So, I think if people watch this, it will give them some closure," Aliaj said.

"I think that everyone has their own special talents, and I think that our girls want to use our gift of dancing, something that we love," King said. "To go out there and show everyone what we experienced and to use our bodies to tell other people’s stories of what they’re still living through this."

Upcoming performances can be found here.

To request the Pacesetters for a performance, contact Darby Boyd Wiles at (281)-237-9282 or at darbykboyd@katyisd.org.