The U.S. Coast Guard is actively trying to control the chemicals that were released into Tucker Bayou and the Houston Ship Channel. 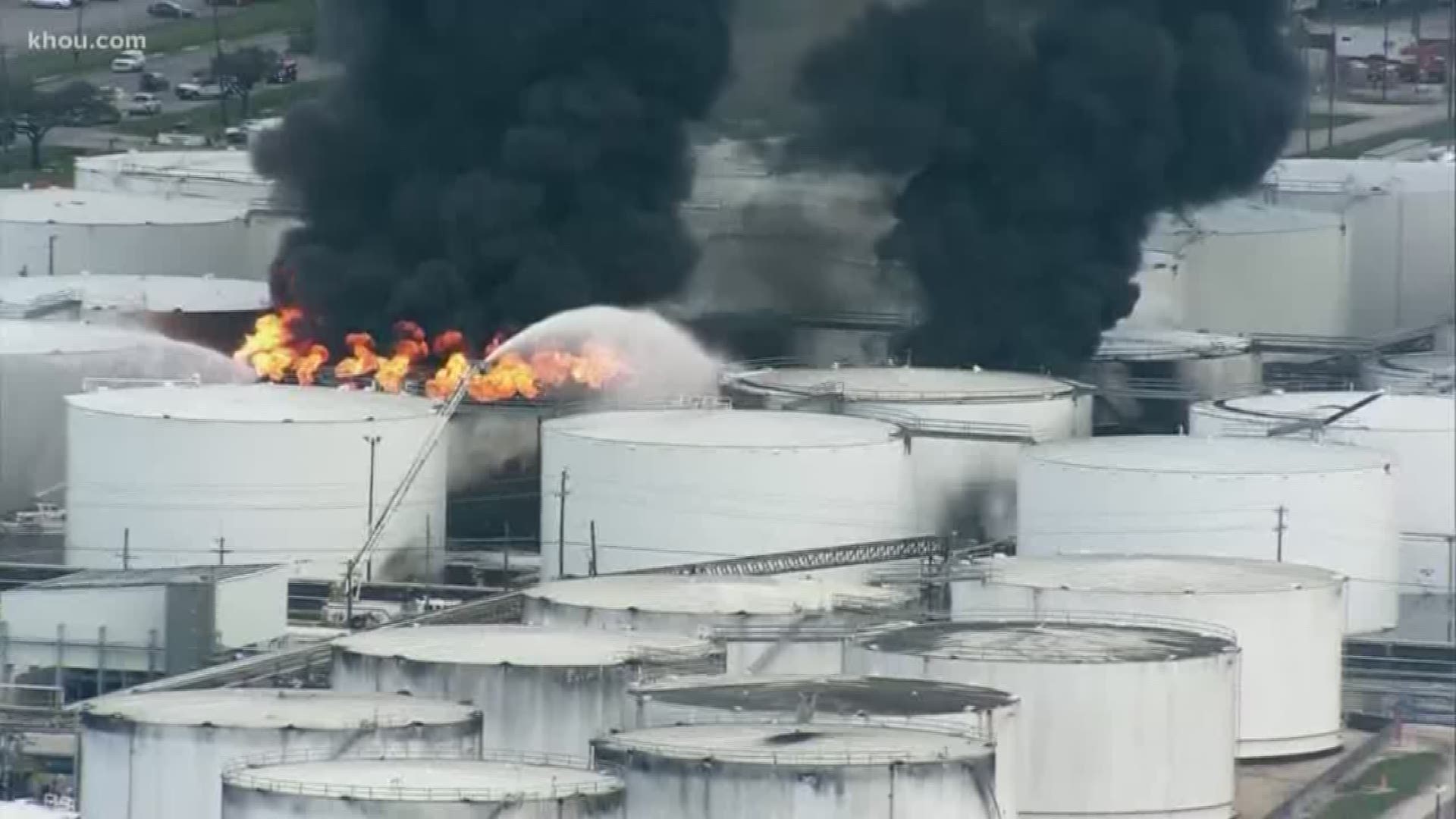 DEER PARK, Texas — Crews working to transfer and cleanup the chemicals at Intercontinental Terminals Company have run into some setbacks after a breach in a dike wall and a fire that reignited Friday afternoon.

During a 10 a.m. press conference Saturday, officials said a secondary containment wall surrounding the western tank farm at ITC was breached at approximately 12:15 p.m. Friday. The breach, which was about 10 feet wide, released a mix of the product from the tanks that burned in the fire, foam and water into a nearby ditch that runs East to West on Tidal Road and then into Tucker Bayou.

Due to the breach, there was a release of product causing a localized elevation in volatile organic compounds (VOCs). In response, a shelter-in-place was recommended for nearby industrial plants and the areas near the Battleship Texas and the San Jacinto Monument State Park.

In addition, the Coast Guard closed a portion of the Houston Ship Channel from Tucker Bayou to the San Jacinto Monument to Crystal Bay.

About three hours later, a fire reignited in three tanks at the tank farm. The chemicals in those tanks were gasoline components, including Xylene. The fire spread to the liquid that escaped through the containment wall breach and into the nearby ditch.

Firefighters were able to contain the fire in a hour.

Brent Weber, incident commander for ITC, believes the foam layer lost during the breach may have led to the fire.

Additional firefighting foam pumps have been positioned around the containment area so a higher volume of foam can be spread quickly should another fire happen.

ITC said they are collaborating with local officials and regulatory agencies to continue to monitor VOC levels in the community. They said current readings do not show any cause for immediate health concerns.

Efforts to pump chemicals from damaged tanks have been suspended temporarily. ITC says they will resume pumping operations when they are sure that the repaired wall is fully strengthened.

During the cleanup process, emergency crews have ran into some issues. There was a small flare-up on Wednesday that sent a fireball into the sky. On Thursday, a benzene scare caused an hours-long shelter-in-place for several communities, including Deer Park, and school districts near the facility have had to cancel classes for several days.

RELATED: What is benzene? Signs & symptoms of chemical that caused Deer Park shelter-in-place

The breach and fire Friday seemed to be the last straw for the state.

The Texas Commission on Environmental Quality is exploring every legal avenue to hold ITC accountable. Gov. Greg Abbott is also suing the facility for violations of the Texas Clean Air Act.

The Chemical Safety Board, a federal agency, has also been called in to investigates what happened before, during and after the start of the fire.

Weber said his concerns for the next 24 hours are to ensure public safety, do some remediation of the affected ditches, the waterways and Tucker Bayou and then to resume transferring chemicals to primary containment vessels.

The Environmental Protection Agency and Texas Commission on Environmental Quality said they are constantly monitoring air quality. So far, no benzine levels have been detected in nearby communities. There were some elevated levels of benzine in the controlled areas.

The U.S. Coast Guard has been activated to mobilize the oil in Tucker Bayou and the Houston Ship Channel.

The portions of the Houston Ship Channel that are closed will be reopened when hazardous conditions no longer exist, said a U.S. Coast Guard spokesperson.

Jerry Mouton, Deer Park's mayor, said drinking water is being tested. Results should be in Saturday or Sunday.

The foundation said the samples were taken before the containment berm failure, so conditions may be differ in future testing.

Samples were taken Saturday to better document the impacts of the ITC fire and response. These samples will be tested for benzene, toluene, and xylenes.