Why does a small town northeast of Houston have more than 1,000 registered aircraft - and no airport? 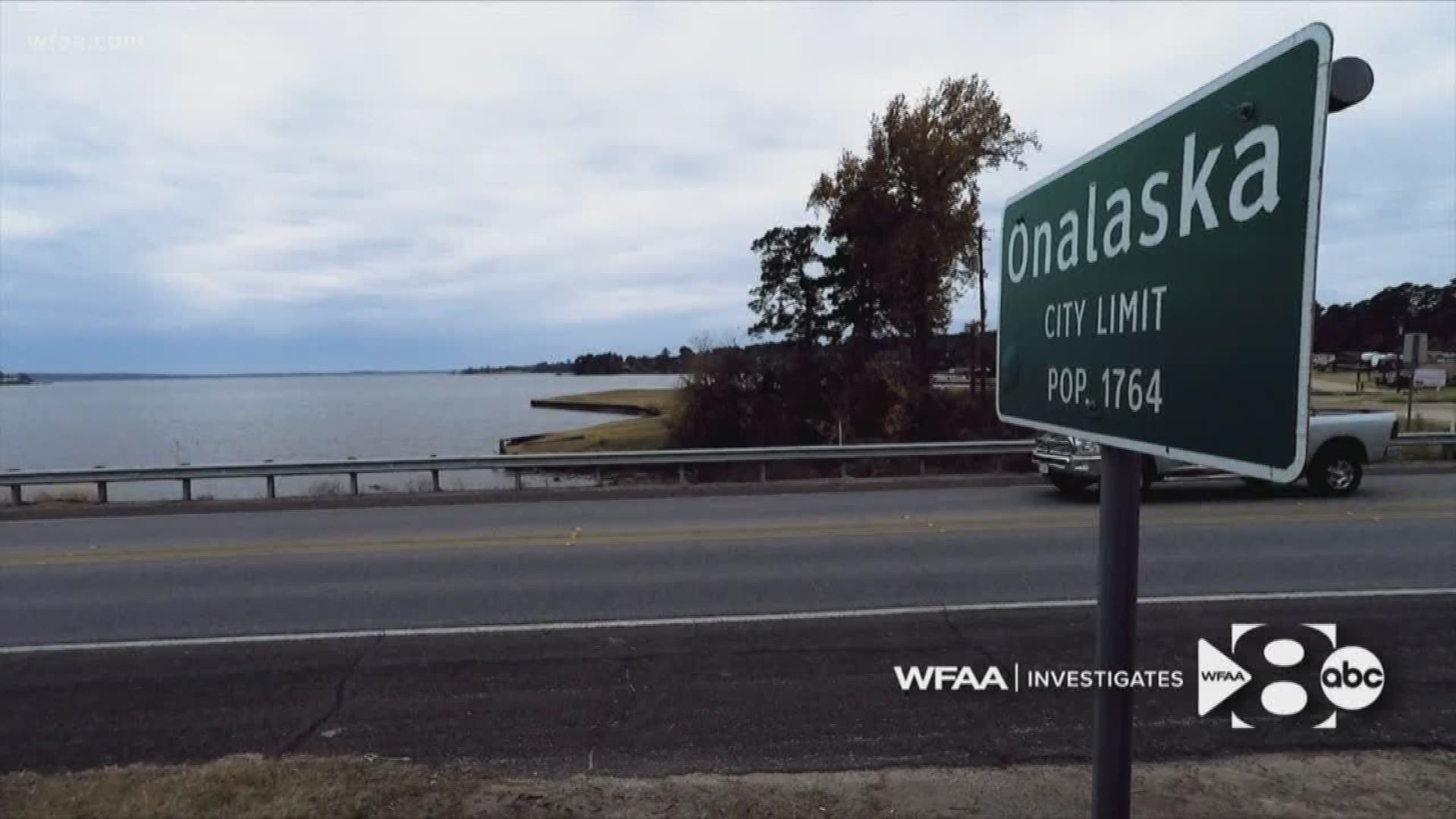 Nestled along the piney shores of an East Texas lake, Onalaska lacks an airport.

A WFAA review, however, has found more than 1,000 registered aircraft claiming an Onalaska address. That’s equivalent to one plane for every three Onalaska residents, which is more per capita than anywhere else in the country.

In fact, more planes are registered to Onalaska than the number of registered planes in entire cities such as Seattle, San Antonio, San Diego, or even New York.

Just as surprising, the aircraft are registered to only two Onalaska P.O. boxes. That’s because the aircraft owners do not live there. Not even close.

"When you can conceal the true ownership of a plane, you're putting a lot of people in jeopardy," said Joe Gutheinz, a former Federal Aviation Administration (FAA) special agent. "If you're a terrorist and you have a way of concealing your secret ownership of a plane in the United States, you're going to do it."

But industry advocates told WFAA that large corporations and foreign partnerships often need to use trusts because of the FAA’s strict citizenship requirements.

To register a plane, owners need to be a U.S. citizen or a permanent resident. However, the FAA will allow foreigners to register their planes by transferring a title to a U.S. trustee.

LINK: NBAA: What Are Non-Citizen Trusts? A Routine, Well-Regulated Way to Register Aircraft

For $5, an owner can register a plane with the FAA.

Planes registered to the name of U.S. trust carry an "N" tail number. It’s a distinction that experts say carries advantages, including allowing planes to receive less scrutiny than when carrying a tail number from a different country.

Trust company officials who handle such trusts told WFAA that they use “due diligence” when vetting owners to ensure they are reputable. However, others disagree and say too little information is readily available in the FAA registry, allowing foreigners to shield their true ownership from law enforcement.

In a post 9/11 America, Gutheinz and Lynch question the practice.

Federal studies back them up.

In 2013, an audit by the Office of Inspector General for the Department of Transportation estimated that about 5,600 planes "lacked key information" about the true ownership.

In a random review of the five major trust companies with the most registrations, federal investigators found the companies "could not or would not provide" the identities of three of four foreign owners requested.

• Got a tip for the investigates team? Tell us here.

“Without collecting and maintaining complete and accurate aircraft data, FAA increases the risk of not meeting its aviation safety mission,” the audit found.

Now trustees are required to turn over the information to the FAA within 48 hours. The 48-hour requirement, however, is too long given the potential for disaster, Lynch said.

“That is not a good policy," said Lynch, who chairs the House National Security Subcommittee. "We shouldn't be into accident re-construction. At that point we're too late in the game."

Gutheinz and Lynch blame a lackadaisical culture within the FAA. Gutheinz said the agency treats the people who register planes as customers rather than those that should be regulated.

"I'm absolutely ashamed about their indifference to a real problem," Gutheinz said.

Lynch said he will soon file legislation to require critical information about foreign owners be on file with the FAA.

"Just tell us who owns these aircraft," Lynch said. "They could easily be turned into weapons. Anybody around 9/11 understands that painfully."

DOT officials told WFAA that one of the trustees cited in the 2013 audit was Aircraft Guaranty Corp. It's the company that registered more than 1,000 planes to two P.O. Boxes in Onalaska.

Connie Wood, an Onalaska resident, founded the company more than three decades ago. It was based in Onalaska until he sold the company several years ago. Wood declined to speak with WFAA.

On its website, the company advertises that it's in the business to help those "who can't meet the FAA citizenship requirements."

But some of those registered by the company in trusts have been linked to questionable or unsavory characters over the years.

Two of the planes registered to the trust company were named during a federal investigation of a massive drug-smuggling operation, according to federal court records filed in 2013.

Here’s what federal law officers detailed in court records seeking to seize one of those two planes:

The plane had been registered in a trust in 2012 on behalf of a Mexican company. The company's legal representative, Fausto Velez Urbina, was convicted in 2005 on federal cocaine trafficking charges and deported back to Mexico in 2010. Urbina purchased the plane from an aircraft broker named Mauricio DeLeon for $1.69 million.

DeLeon had been linked by investigators to former Gulf Cartel leader Osiel Cardenas-Guillen. Cardenas-Guillen, now housed in a U.S. federal prison, founded the much-feared Los Zetas, comprised of former military commandos who served as ruthless assassins for the cartel.

In 2008, a plane registered to Aircraft Guaranty Corp. lost power upon take-off and crashed into a home near Caracas, Venezuela, killing seven. The pilot, a twice-convicted drug smuggler, died along with two other passengers on the plane.

The family sued the company seeking to find out the real owner of the plane. Aircraft Guaranty denied any liability. According to media accounts, the family's attempts to find the real owner went nowhere.

Several years ago, former Guatemalan Vice President Roxanna Baldetti was arrested on corruption charges. According to news accounts, Baldetti routinely flew around on a plane registered by Aircraft Guaranty on behalf of a Panama-based company. She is now serving a prison sentence in Guatemala. She still faces federal drug charges in the U.S.

Aircraft Guaranty's planes are still be registered to P. O. boxes in Onalaska, but the company is now based in Oklahoma City.

The owner, Debra Mercer-Erwin, bought the company in 2015. She said she still has two employees pick up the mail for the company at the Onalaska P.O. boxes. But, otherwise, the company’s operations now are in Oklahoma City.

"We collect passports on everybody," Mercer-Erwin told WFAA. "We know who our clients are. We have constant communication with our clients."

She said Aircraft Guaranty hasn't been contacted by the FAA about problems with any of her company’s registered planes since she took ownership.

She discounted the notion that criminals would go through the trouble to place their airplanes in trusts.

"Why would they want to provide all their personal information and their passport documents to place an aircraft in trust?" she said.

But WFAA found there was an incident involving one of Aircraft Guaranty's planes that did occur on her watch.

In 2016, the Drug Enforcement Administration seized one of the company's planes while investigating an international drug smuggling and money laundering conspiracy, according to records filed in a New York federal court. The plane was seized when agents arrested one of the accused ringleaders, who ran a business in Nevada.

Lynch told WFAA that a large amount of heroin was seized along with the plane.

The true owner of the plane, a Mexican national, was not indicted. However, records show, he paid more than a half a million dollars to get the plane back.

"Somebody walks in and able to reclaim their aircraft with $550,000 in cash," Lynch said. "I mean who does that? What do you think the plane is doing now?"

According to FAA records, Aircraft Guaranty originally registered the single-engine, six-seater plane in 2013 on behalf of a Nuevo Leon resident. Bexar County officials levied a tax lien of more than $10,000 in 2017. Aircraft Guaranty transferred the title of the plane back to the true owner in late 2017. The company again became the plane's trustee in March 2018.

Others say there's no correlation between the use of trusts and criminal activity.

“The reputable companies do it right,” said Frank Polk, an Oklahoma City-based aviation law attorney who represents Aircraft Guaranty and other trust companies.

Polk also said if a “bad guy” wants to register a plane, a trust isn’t the way to do it because trustees do a “significant amount of due diligence.” It would make a lot more sense just to directly register the plane with the FAA and falsely claim to be a U.S. citizen.

Industry advocates told WFAA that the FAA’s strict citizenship requirements can be onerous.

They said it can be difficult for publicly traded companies to determine if they meet all the requirements. To qualify as a U.S. entity, a company’s president must be a citizen. Two-thirds of its officers or directors must also be citizens. Seventy-five percent of its shareholders must also be U.S. citizens.

Representatives of the National Business Aviation Association told WFAA that their group worked with the FAA to make changes following the 2013 audit. One of those changes was the 48-hour requirement.

The NBAA did not provide anyone to speak on the record and instead provided WFAA with a “white paper” outlining their position.

"We believe the information made available to the FAA today is sufficient," the NBAA paper said. The NBAA also argued in the “white paper” that Lynch's legislation "will result in unintended consequences and potential harm to the aviation industry.”

Lynch scoffed at the concerns. He told WFAA he’s looking forward to the result of two investigations—one being carried out by the Congress' investigative arm, the General Accountability Office, and the Department of Transportation's Inspector General—into the practice. The GAO's report is expected to be released later this year.

“It's all about the bottom line, the dollar for the trust companies,” Lynch said. “They are bargaining away and exploiting the laws that are in existence in our country for their private financial gain. But they are putting the public and national security at dire risk.”

Onalaska residents told WFAA they had no idea so many planes were registered to their town.

"The majority of the people that live here permanently that are residents of Onalaska can't afford a plane," said Zachary Davies, a local real estate agent and father of five.

Davies’ uncle, Roy Newport, the former mayor of Onalaska, thought the high number of registered planes must be an error.

"What's the catch to this?" Newport said. "I don't buy that. It's a computer glitch or something. What would be the advantage of listing them here?"

It is no computer glitch.

And the secret is now out.