“And then the pledge came on, and they both stood. And then I didn’t. She asked me to, and I said I wouldn’t. And then she said well you’re kicked out of here," India said. 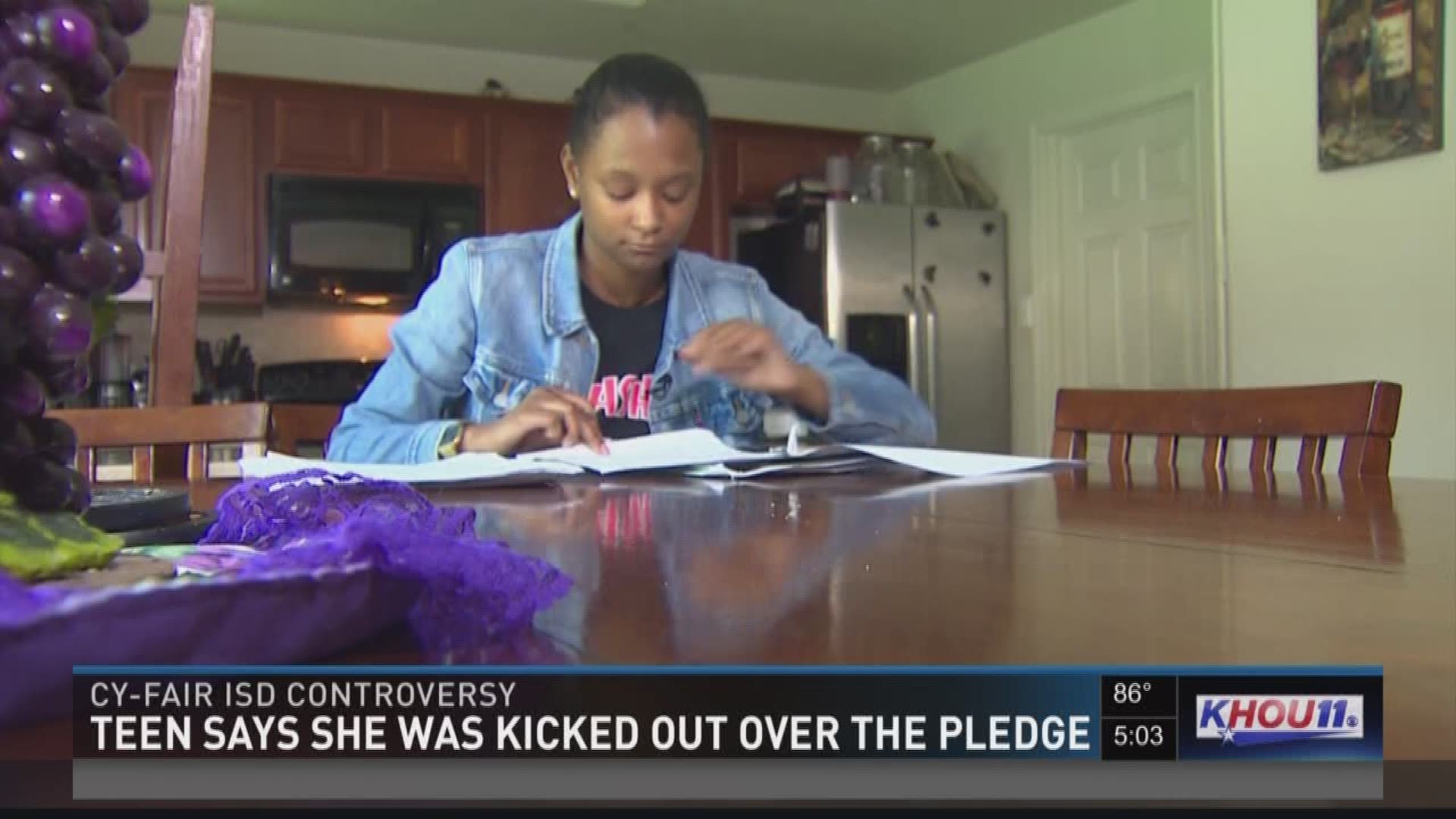 A Cy-Fair ISD senior is no longer sure when she’ll be able to graduate after she says she was kicked out of school on Monday for not standing for the Pledge of Allegiance.

On Thursday, she still wasn't allowed to go back on campus.

It’s something she says she’s done for years, but it was never a problem until now.

India Landry looked through her homework in her home Thursday afternoon. She finished an English paper Monday night that wasn't due until Wednesday. Now her homework is late.

“And then the pledge came on, and they both stood. And then I didn’t. She asked me to, and I said I wouldn’t. And then she said 'Well you’re kicked out of here,'" India said.

Landry is a senior at Windfern High School on Monday. She was sent home after the Pledge of Allegiance.

“I've never been to a school where I was called to come get my child, and no one would talk to me about what’s going on," said Kizzy Landry, India's mother.

Kizzy said, later, the principal finally did talk to her.

“I would love for my daughter to be able to exercise her rights as well," Kizzy said on the recorded phone conversation.

She said she recorded the phone conversation of what the principal said.

“She can't come to my school if she won't stand for the pledge," Kizzy said the principal told her.

It’s something India has done for as long as she can remember.

“I don’t think that the flag is what it says it’s for, for liberty and justice and all that. It's not obviously what's going on in America today," India said.

It’s never been a problem - until now.

“They were making rude comments saying 'This isn’t the NFL, you wont do this here,'” India said.

Mom says they’ve tried to work it out, but then the district began citing India’s grades and absences.

“All of a sudden, you have all of these issues with my child, but if it was like this, you would’ve said something a long time ago," Kizzy said.

Months away from graduating, India says she may only have two options: stand or get her diploma. She knows her decision.

“I wouldn’t stand because it goes against everything I believe in," India said.

The district has responded with the following statement:

"A student will not be removed from campus for refusing to stand for the Pledge. We will address this situation internally."

The school district has a policy that if you don’t say the Pledge of Allegiance, you still stand unless you have a note from your parents.

Kizzy says she tried to write a note but was told her daughter will not be allowed back at all until she stands, with or without that note.

KHOU 11 has also reached out to civil rights attorney, Randall Kallinen, who says this is a violation of India’s First Amendment right because the school is public and is treated like a government.