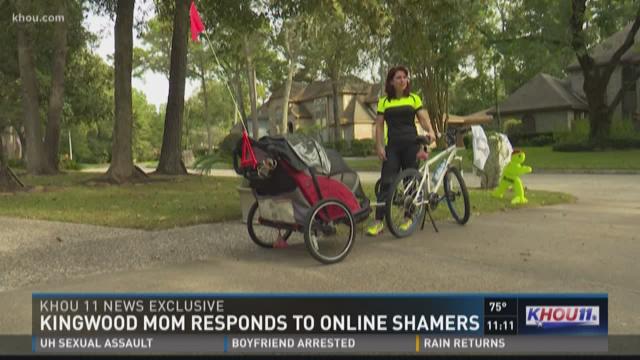 KINGWOOD, Texas – Twice a day, five days a week, parents line up at Bear Branch Elementary. The line is long as students are picked up and dropped off.

Since school started this year, almost everyday, Jennifer Ackerman has peddled past other parents, right to the school’s front door.

Her twin boys are in first grade but aren't going to the same elementary school that backs up to the family's backyard.

One of Ackerman’s sons is autistic and the Kingwood school district offered the child a spot in a program that is designed for gifted children, including those with special needs.

For the Ackerman family, that meant both boys had to be in two separate places, at the same time.

“I was like the only way to do this is to bicycle. Take the trails, get on the road, make it happen.” said Ackerman.

The mom didn't realize people were upset about her peddling past them, until she was stopped by a police officer, who she says, told her she was completely in the right.

The trip to get her kids to school on time is three miles each way, a 12 mile-route, sometimes taken in the rain.

The mom's daily routine was a topic of conversation in an online message board at www.Kingwood.com.

The original post included a photo of Ackerman on her bike with her sons in tow and the comment, "Not sure what this woman is thinking but she is getting in the way during morning traffic, not to mention putting herself and her child at risk."

Some felt the same, while others disagreed and said she wasn't breaking the law.

"I don't see the problem, it looked like there was plenty of room on the street to me, and you obviously saw her well enough to take a picture." another person wrote in response on the board.

The thread goes on for 11 pages but not every comment is about the biking mom.

However, on Page 10, Ackerman responded to the post Wednesday morning with a photo of her own and a lengthy message to critics.

She said on Thursday she had no idea people were complaining, she just doesn't want her children to be late for school.