President Donald Trump returned to the White House still infected with COVID-19 and removed his mask for a photo opportunity shortly after. 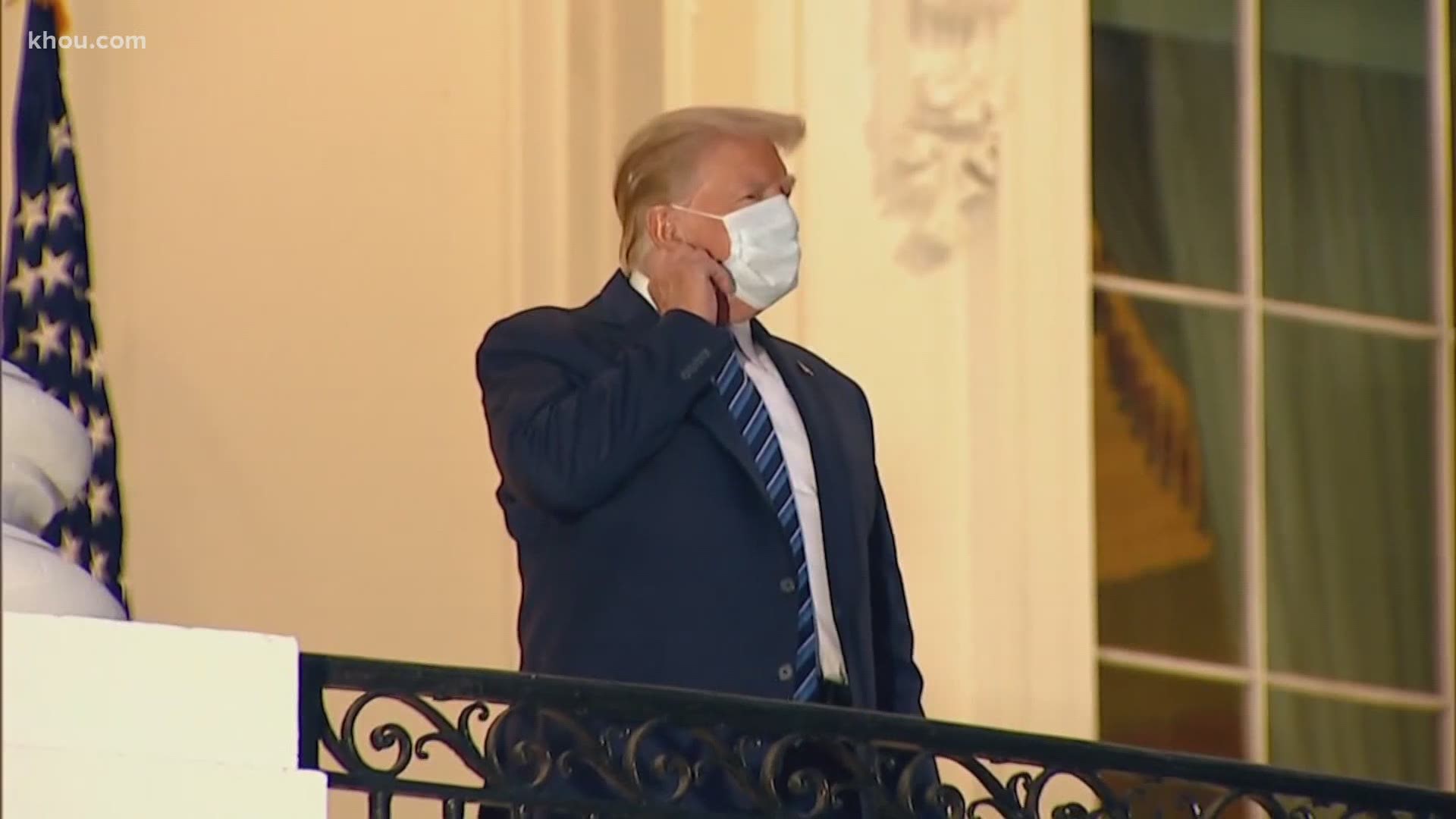 HOUSTON — After spending four days in the hospital, President Donald Trump walked out of Walter Reed Hospital in a mask even though he is still infected with COVID-19.

"Though he may not be entirely out of the woods yet, the team and I agree that all our evaluations and most importantly his clinical status, support the president's safe return home, where he'll be surrounded by world-class medical care 24-7," said Dr. Sean Conley, Trump's physician.

Trump continues to be treated with the steroid Dexamethasone and will receive a final dose of the drug Remdesivir on Tuesday.

Infectious disease expert Dr. Peter Hotez says he doesn't think the president should have been released from the hospital yet.

"I think that's a mistake to discharge him tonight," Hotez said.

Hotez said there are still unknowns about Trump's status. Nonetheless, Trump made the short flight back to the White House on board Marine One, where a COVID-19 outbreak is underway. On Monday, Press Secretary Kayleigh McEnany became the latest staffer to test positive.

"There's basically an epidemic in the White House which is a national security risk," Hotez said.

Trump walked out on the South Lawn and up the steps of the White House where -- despite being contagious -- took off his mask for a photo opportunity.

Less than an hour later, Trump tweeted a campaign-style video featuring his return to the White House.

Trump walked inside the White House without putting his mask back on.

The series of events come one day after Trump's drive-by outside the hospital to greet supporters. That also a move also heavily criticized by health experts.

"It's not something I would have wanted my patients to do," said Dr. Robert Atmar, an infectious disease expert at Baylor College of Medicine.

Meanwhile, the 2020 presidential campaign continues with former Vice President Joe Biden in Florida and Trump vowing to be back on the campaign trail soon with a message to the public. He says he feels better than he did 20 years ago.

I will be leaving the great Walter Reed Medical Center today at 6:30 P.M. Feeling really good! Don’t be afraid of Covid. Don’t let it dominate your life. We have developed, under the Trump Administration, some really great drugs & knowledge. I feel better than I did 20 years ago!

"It tends to send a wrong message to the American people that COVID-19 isn't a big deal when we know it's a huge deal," Hotez said. "It's the greatest public health catastrophe we've faced in the last 100 years. Of course, people should fear COVID. It's become one of the leading killers of Americans. The president has downplayed the severity of the virus."

Trump's medical team said they will closely monitor him the next few days to keep both he and the White House staff safe until he's in the clear.