The county can detect chemicals in air, but "they do so with old and, in some cases, antiquated technology," wrote a consultant hired by Harris County. 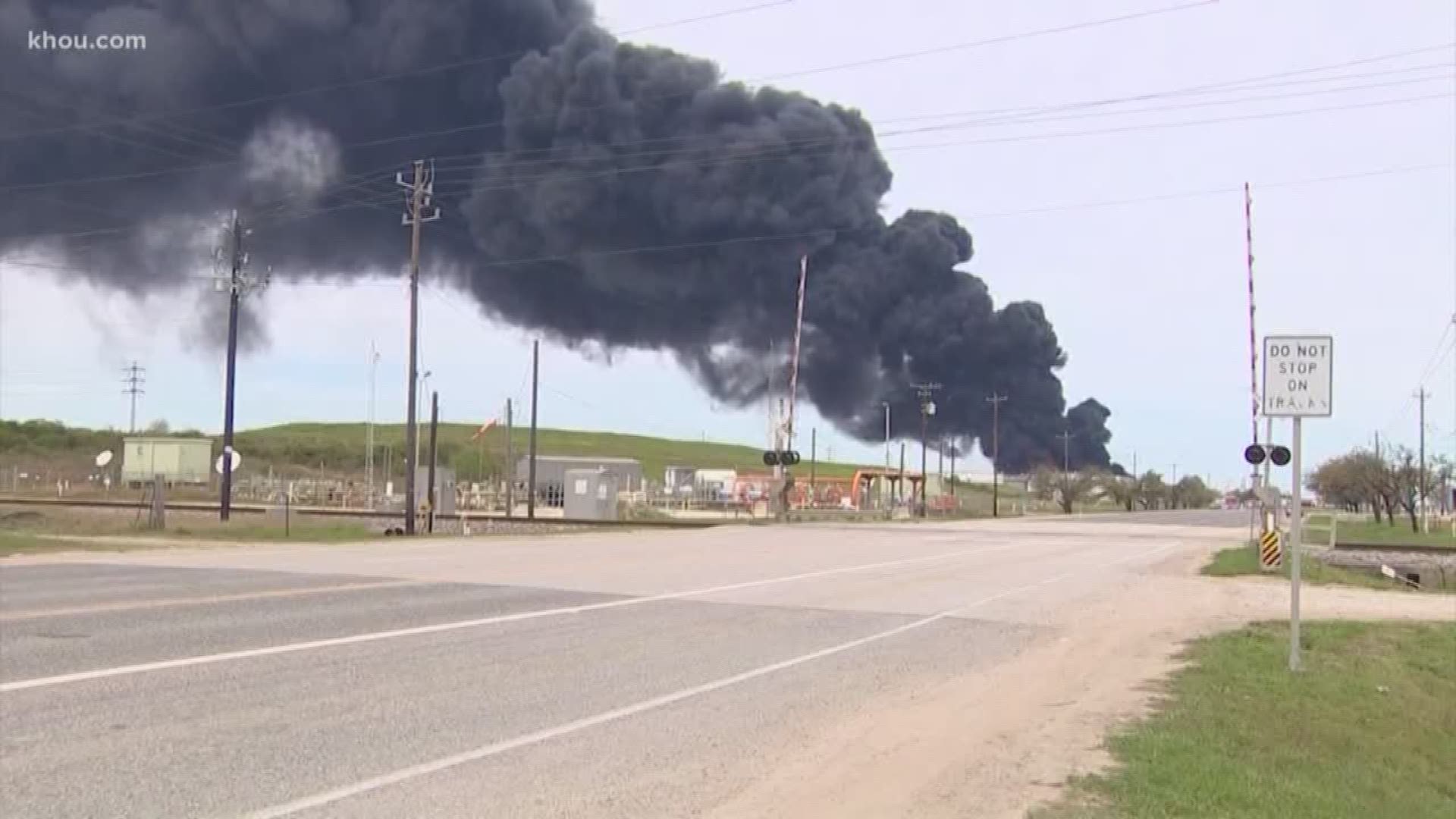 HOUSTON — You can't watch a fire burning at a chemical plant and not wonder what's billowing in the air and how it might affect your health.

Houston watched as a fire burned at an Exxon-Mobil facility in Baytown Wednesday. A thick plume of black smoke streamed into the air for more than six hours.

In the wake of the ITC fire, the Harris County Commissioners Court approved a contract with PENTA Consortium LLC to develop an analysis in order to identity gaps in the way the county prepares for and responds to incidents like the ITC fire.

During the Harris County Commissioners Court meeting on Tuesday, county judge Lina Hidalgo said of the ITC fire response, "it was evident that the county was under-prepared to do air monitoring."

She told commissioners that the analysis provided by PENTA provided "a lot of room for improvement," because during the March 2017 fire in Deer Park, Harris County "had to cobble together air monitors" from private entities and other jurisdictions.

The lay of the land:

Harris county is the third biggest county in the country with more than 4 million residents, according to the 2010 U.S. Census. It has a land mass larger than the state of Rhode Island and is at the center of the largest petrochemical complex in the western hemisphere.

With more than 10,000 miles of pipeline, Harris County has more pipeline than any other county, and more than 1.7 million residents live within a half-mile of these pipelines.

Because of transportation options like road, railway, pipelines and the Port of Houston, hazardous materials are not limited to a specific area of Harris County.

In fact, as of 2017, 2,927 chemical facilities are reported to be within Harris County.

Of those 2,927 chemical facilities, 1,734 reported that they had Extremely Hazardous Substances (EHS's) on their site.

Look and you'll see a number of those facilities are in the suburbs, away from Pasadena and Deer Park.

What We Learned About Air Quality Monitoring Within Harris County:

The analysis breaks down the strengths and weaknesses of every county department involved in the response to the ITC fire, including the Harris County Pollution Control Services Department which handles air quality monitoring.

The analysis states that the department has experienced "the greatest entropy in the last 21 years out of the all the departments analyzed."

And, although chemical detection is part of the department, they do so with outdated equipment.

According to the Texas Commission on Environmental Quality, there are 41 fixed sites throughout Harris County that provide a variety of air monitoring data, predominantly ozone detection.  And none of them provide real-time readings to a central location.

"Another issue with the 41 fixed monitors: some are maintained by TCEQ, some by Harris County and others by industry," wrote PENTA.

Harris County Pollution Control has 12 fixed ozone monitors, of which eight are fully operational and one is "near-operational."

All 12 should be operational next year.  And currently, they are not ideal or even adequate for a fire involving fuel producing elevated levels of benzene in the air.

Of the findings, Harris County Judge Lina Hidalgo said, "some things we can't be proud of, but we'll work on it."

Take Aways From The Analysis:

PENTA made a number of recommendations to each Harris County department, but these three areas for improvement impact multiple agencies:

When talking about the errors in data from facilities holding chemicals, Harris County plans to do a comprehensive analysis to better understand the hazards and risks posed by different facilities, and to do that, the county plans to visit the the top 20 facilities that have the largest quantities of the most hazardous chemicals.

And because there are thousands and thousands of miles of pipeline running through Harris County, commissioners want to get the newest maps and information about them to identity potential risks to the community.

What to Expect From Harris County n The Future:

PENTA made a number of recommendations that should be rolled out immediately or over the course of a few years.

The Harris County Commissioners Court voted to spend the next 45 days brainstorming ways to improve the Pollution Control Services Department.

Here's a graphic made by Harris County highlighting what residents should expect: