Cuevas is to remain in custody of the Fort Bend County Sheriff's Office until he makes bond. 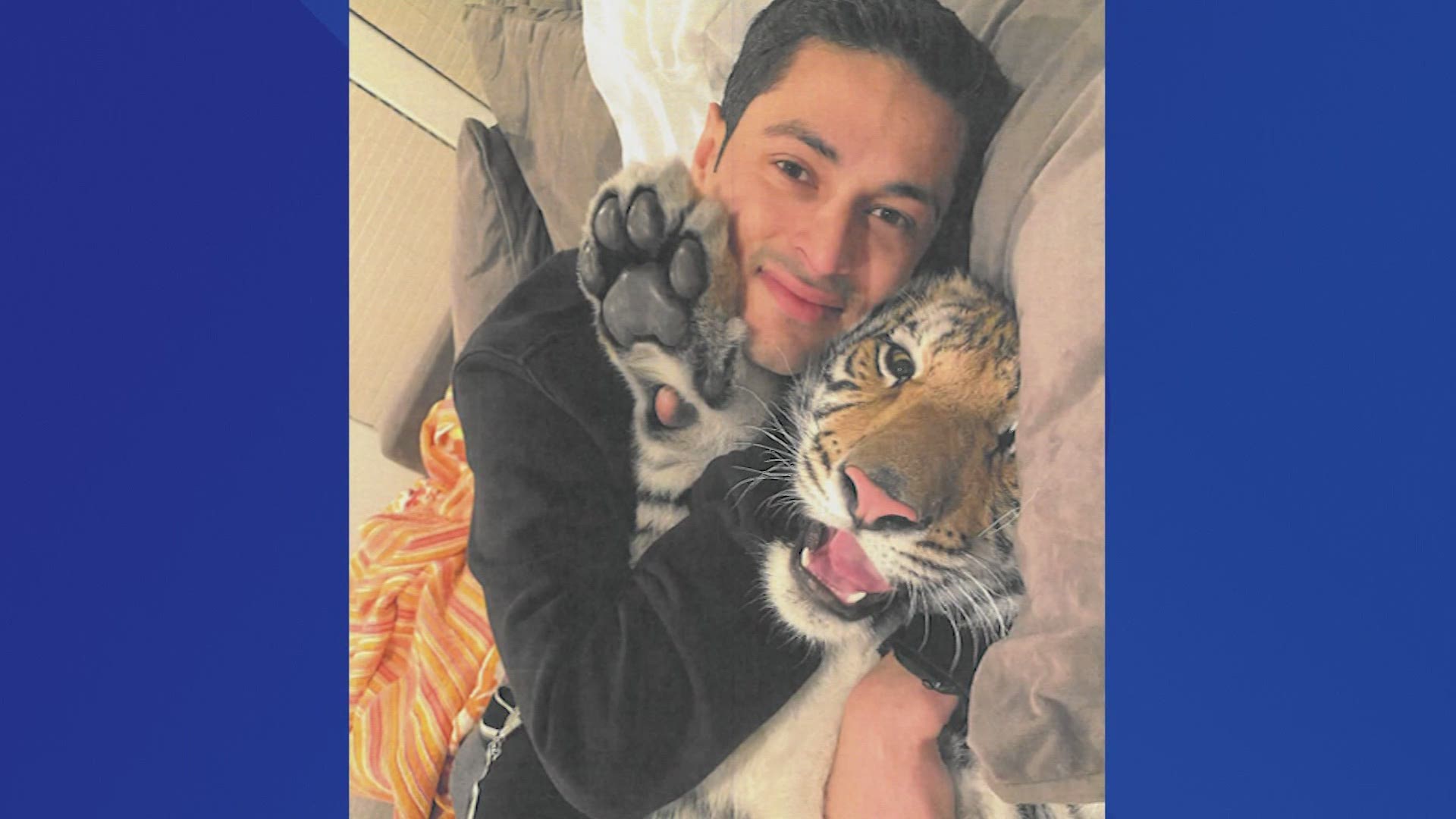 HOUSTON — It was an all-day bond hearing in a Fort Bend County courtroom, ending with a murder suspect who had been seen taking a tiger into a west Houston home last weekend having his bond revoked and a new bond set.

Judge Frank Fraley revoked bond for Victor Cuevas, 26, in the case of a 2017 murder. The judge set a new bond of $300,000 with the same conditions as before.

Cuevas, who we learned from his wife's is an MMA fighter, is to remain in custody of the Fort Bend County Sheriff's Office until he makes bond. He is also being given a new trial date for the 2017 case.

Cuevas' attorney, Michael Elliott, said after the ruling that it may be a few days before Cuevas is bonded out, if he is. He added that the family has to make that decision.

The ruling came after a hearing that lasted all day Friday.

Cuevas is the man at the center of the Houston tiger investigation. The bond on the murder charge is unrelated to the tiger investigation, but prosecutors said Cuevas has violated his bond conditions in connection with the incident.

Cuevas was already out on bond for the murder charge when the Harris County District Attorney's Office charged him with evading arrest after he allegedly ran away from police with the tiger in the back of an SUV Friday.

Cuevas was arrested Monday night and placed into Fort Bend County jail. By Wednesday he was released on a $50,000 bond.

Prosecutors said Cuevas violated the conditions of his original bond and they wanted him back behind bars.

By the way, this video I took shows Victor Cuevas — the man accused of fleeing with ‘India’ the missing Bengal tiger 🐅 — arriving in style in a Bentley before stepping out and standing next to his lawyer who gave a quick remark before heading to Cuevas bond hearing. @KHOU https://t.co/xeWSSJf4Y8 pic.twitter.com/dBnTglj2Pd

Before the bond hearing, Elliott spoke to the media and continued to double down on the tiger, who is named "India," not being his client's.

Elliot said Cuevas loved the tiger and treated her well, but the tiger does not belong to Cuevas.

During the court hearing, the off-duty Waller County deputy who came face-to-face with the tiger testified about the conversation he had with Cuevas Sunday.

Deputy: Victor Cuevas on Sunday said “That is my tiger”, grabbed it by collar, kissed it on the forehead, took it back inside. Later, says he saw Cuevas in his vehicle. “I saw a tiger in the back of his vehicle.” #khou11

Waller County deputy Wes Manion, who confronted Cuevas Sunday night after hearing about the tiger on social media, testified Cuevas said the tiger was his, and that he saw both inside a white SUV. He testified Cuevas drove across a neighbor’s yard and “peeled out” as police arrived.

#Tiger hearing evidence. Defense just shared these exhibits, claiming #VictorCuevas is a caretaker but not the owner of Tiger wandering in West #Houston this week. #KHOU11. @FBCDAO pic.twitter.com/IfcSHIVZ8K

Cuevas’ lawyer said Manion had no authority to order his client to stay.

“I ordered Victor Cuevas to go back to the driveway several times,” Manion said. “I identified myself as a sheriff’s office employee.”

One is cell phone footage showing the white SUV Manion says Cuevas and the tiger were in driving off.

The other is black and white neighborhood security video appearing to show the same SUV speeding down the street…with police in pursuit a few seconds later.

Georgie Cuevas, who was identified as the wife of Victor Cuevas, also testified as to what happened on May 9.

She says she is a student at UCLA.

“What did you tell Victor to do?” Elliott asked her.

“To go into his car," she answered.

“To do what with the animal?” Elliott asked.

“To put him into safety," she answered.

The deputy who confronted the tiger also took the stand.

“He then stated, 'It was my tiger,' I told him to 'get his tiger.' Yes, sir, he said, 'that is my tiger,'" said Sgt. Wes Manion with the Waller County Sheriff's Office. “He approached the tiger, grabbed him by the collar and kissed it on the forehead and proceeded to take it back into his house."

We also learned more about what Cuevas does for work.

“He’s a fighter, a barber and does Airbnb as well," Cuevas' wife said.

Cuevas’ attorney maintains his client was merely the temporary caretaker of India, the tiger, not the owner.

He also released new photos and a video of Cuevas with the tiger taken over the past several months.

“India was taken to the owner of the cat. And it’s the owner who we are looking for." Elliott said during a briefing following the ruling.

The attorney said they are still looking for the tiger. They hope to find him and get him to a preserve.

Houston police said they have received hundreds of phone calls from people providing tips on the whereabouts of the cat, but they still don't know where she is.

Investigators believe India is still in Houston, although, they said she may have been passed around a half dozen times.

"We know the group of people that are involved in the exotic animal trading here in Houston. We deal with them all the time," police said. "We visited all of them and no luck so far." 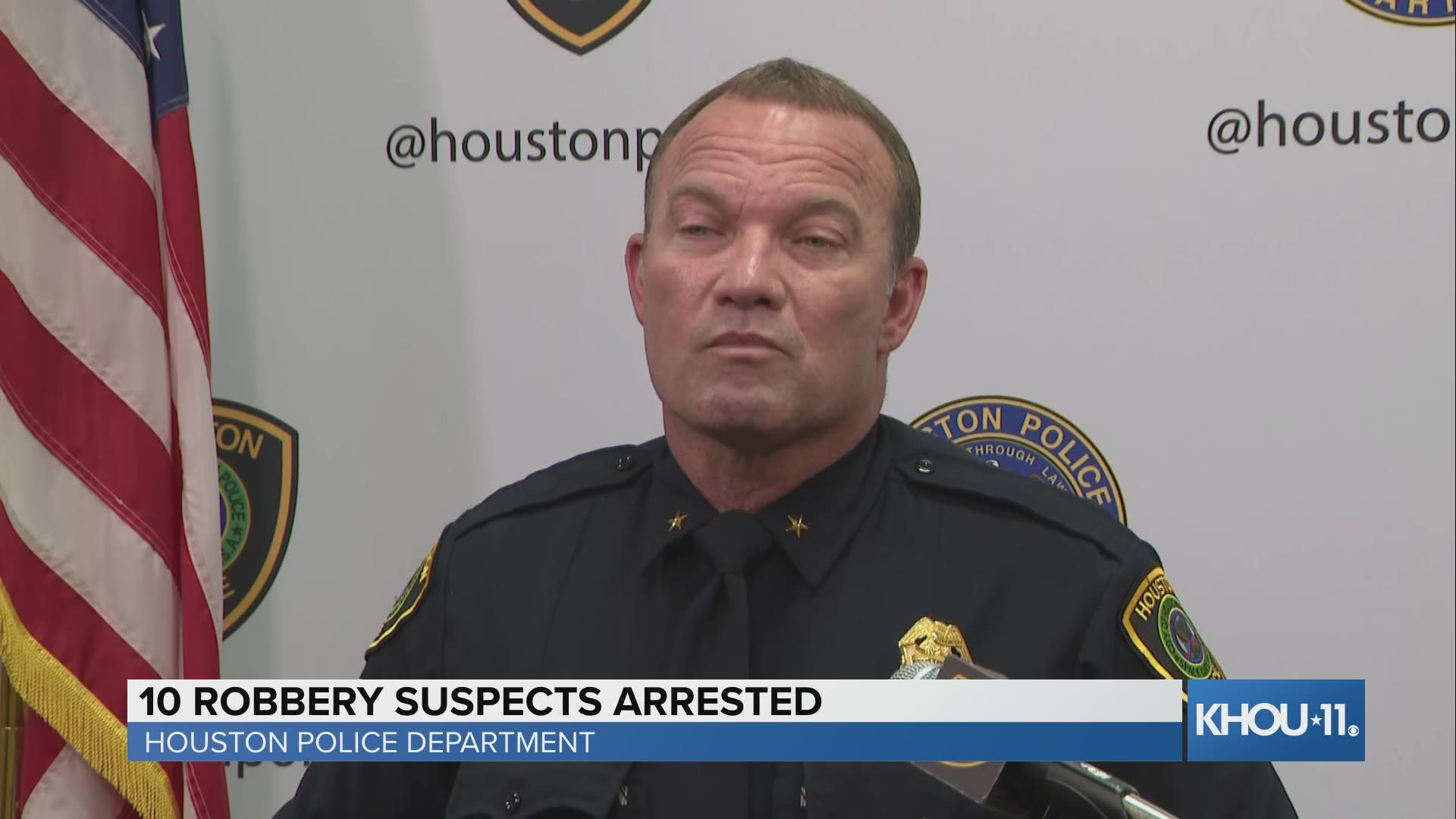 RELATED: 'It's not his tiger' | Lawyer for man at center of tiger investigation says HPD rushed to judgment

"HPD was in such a hurry to wrap it and find their guy that they just assumed because my client was the one who caught this tiger, who went out and go it and brought it back into safety, everyone is just assuming that he is the owner of the tiger," attorney Michael Elliott said.

Houston police and BARC animal control officers are looking for India. An HPD spokesperson told us they're "still waiting for a phone call on its location."

Even Tiger King star Carole Baskin has joined the hunt for India. She's offering a $5,000 reward to help find the big cat.

The operator of a Texas animal sanctuary said she thinks India is probably being kept indoors.

"If the tiger were out on the street, which I seriously doubt he is, he would probably try to hide, find a spot where he's hidden because that's what most wildlife do to feel protected," said Noelle Almrud. "So, there's no telling, you know, where he could go."

Almrud said if you encounter the tiger, get to a safe place and call 911.

Meanwhile, Almrud's sanctuary, Cleveland Amory Black Beauty Ranch, is ready to take India and care for him once he's found.