2 dead in massive explosion in northwest Houston; no evidence of terrorism 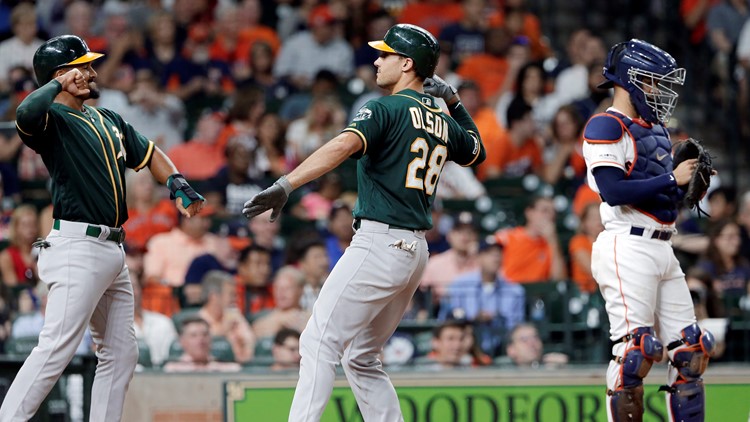 Photo by: AP
Oakland Athletics Marcus Semien, left, and Matt Olson, center, celebrate at the plate next to Houston Astros catcher Robinson Chirinos, right, after they scored on a two-run home run by Olson during the third inning of a baseball game Thursday, Sept. 12, 2019, in Houston. (AP Photo/Michael Wyke)

HOUSTON (AP) - Matt Olson hit a two-run homer to back a solid start by Homer Bailey and the Oakland Athletics beat the Houston Astros 3-2 Thursday night to take over the AL wild-card lead.

Oakland shook off a 15-0 loss in the opener of this four-game series to win three in a row, beating Cy Young Award front-runner Justin Verlander in the finale.

The A's moved a half-game ahead of Tampa Bay atop the AL wild-card standings. Cleveland is one game behind Oakland.

The Athletics got Verlander (18-6) for three runs in the first three innings before he settled in to pitch three scoreless frames.

Bailey (13-8) yielded three hits and one run in 5 1/3 innings to win his fourth straight decision. He matched his career high in wins set in 2012 with Cincinnati.

It was a much better outing than in his first start against Houston this season when the Astros jumped on him for eight hits and nine runs - both season highs - in just two innings of an 11-1 loss on July 22.

The Astros missed opportunities in both the eighth and ninth innings to tie it or take the lead on a night they went 0 for 10 with runners in scoring position.

Jose Altuve's solo home run off Yusmeiro Petit got Houston within a run with one out in the eighth inning. The Astros loaded the bases with two outs but Blake Treinen struck out rookie Kyle Tucker to leave everyone stranded.

Houston had runners on first and third with two outs in the ninth, but Liam Hendriks struck out Michael Brantley for his 21st save.

The Athletics tagged Verlander right away in his second start since tossing his third career no-hitter on Aug. 1. Marcus Semien singled on his first pitch and he struck out the next two batters before Mark Canha walked. Seth Brown gave Oakland an early lead with an RBI double to left field.

It was Semien who got things going again in the third with a leadoff single. An out later, Olson extended his career high by hitting 32nd home run this season and third of the series to make it 3-0.

Verlander, who leads the AL with a 2.58 ERA, allowed five hits and three runs with 11 strikeouts in six innings to snap a three-game winning streak. He is just 25 strikeouts shy of reaching 300 for the first time in a season and needs 19 Ks to become the 18th player in MLB history to collect 3,000 in his career.

Robinson Chirinos singled and Josh Reddick doubled to start the bottom of the third. The Astros cut the lead to 3-1 when Chirinos scored on a groundout by George Springer.

The Astros had runners at first and second with no outs in the sixth after Bailey walked Altuve and Brantley. Bailey struck out Alex Bregman before he was replaced by Jake Diekman, who picked off Altuve as he tried to steal third base before striking out Alvarez to end the threat.

Astros: SS Carlos Correa (sore lower back) will begin a rehabilitation assignment with Triple-A Round Rock on Friday.

Astros: RHP Gerrit Cole (16-5, 2.73) is scheduled to start for Houston in the first of three games with Kansas City on Friday. Cole, who leads the league with a career-high 281 strikeouts, allowed one hit and fanned 15 in a season-high eight innings of a 21-1 win over Seattle in his last start.