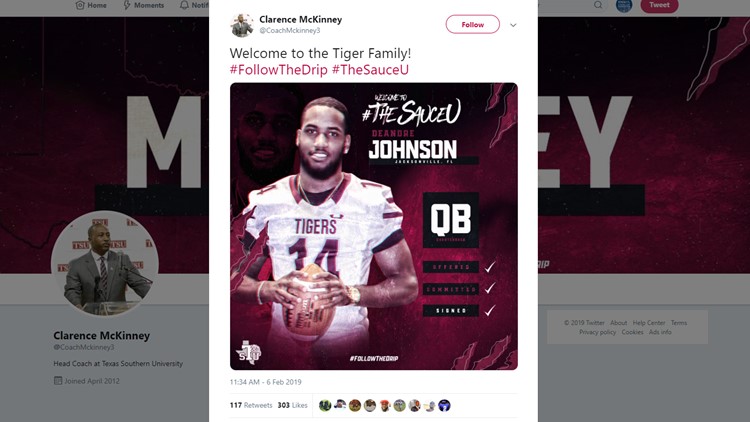 Photo by: KHOU
DeAndre Johnson, a quarterback who once suited up for Florida State and was featured on the Netflix series “Last Chance U,” signed with Texas Southern University on National Signing Day.

HOUSTON — DeAndre Johnson, a quarterback who once suited up for Florida State and was featured on the Netflix series “Last Chance U,” signed with Texas Southern University on National Signing Day.

Johnson is one of five players who signed letters of intent Wednesday.

He and three other players who are transferring to TSU spent time with a Power 5 conference program.

The five signees were added to the 15 players who were added during the early signing period. The group of 20 includes five Division I FBS transfers, five junior college transfers, and 10 high school players signing letters of intent.

Johnson is transferring in after spending a season with Florida Atlantic.

The quarterback was dismissed from Florida State in July 2015 after punching a woman in a bar.

According to the CBS Sports, Johnson was an early enrollee at FSU. He was suspended in late June and was charged with misdemeanor battery, and was dismissed from the program by early July when security video of him striking a woman was made public.

Johnson entered a plea deal later that year which required him to participate in a sheriff’s work program and serve six months probation, according to CBS Sports.

The quarterback ended up at East Mississippi Community College where he was featured on the second season of Netflix’s documentary series “Last Chance U.” The show highlights athletes with difficult pasts who end up playing football at the community college level in hopes of getting a scholarship again.

"These kids are coming in here and buying into the program," McKinney said of his first recruiting class at TSU. "I think the players we signed – in the early signing period as well as this signing period – I think those guys are going to help us reach the goals that we've set."