The ITP panel takes a look at which local, state and national leaders excelled, and who underperformed in this year's Turkey Awards. 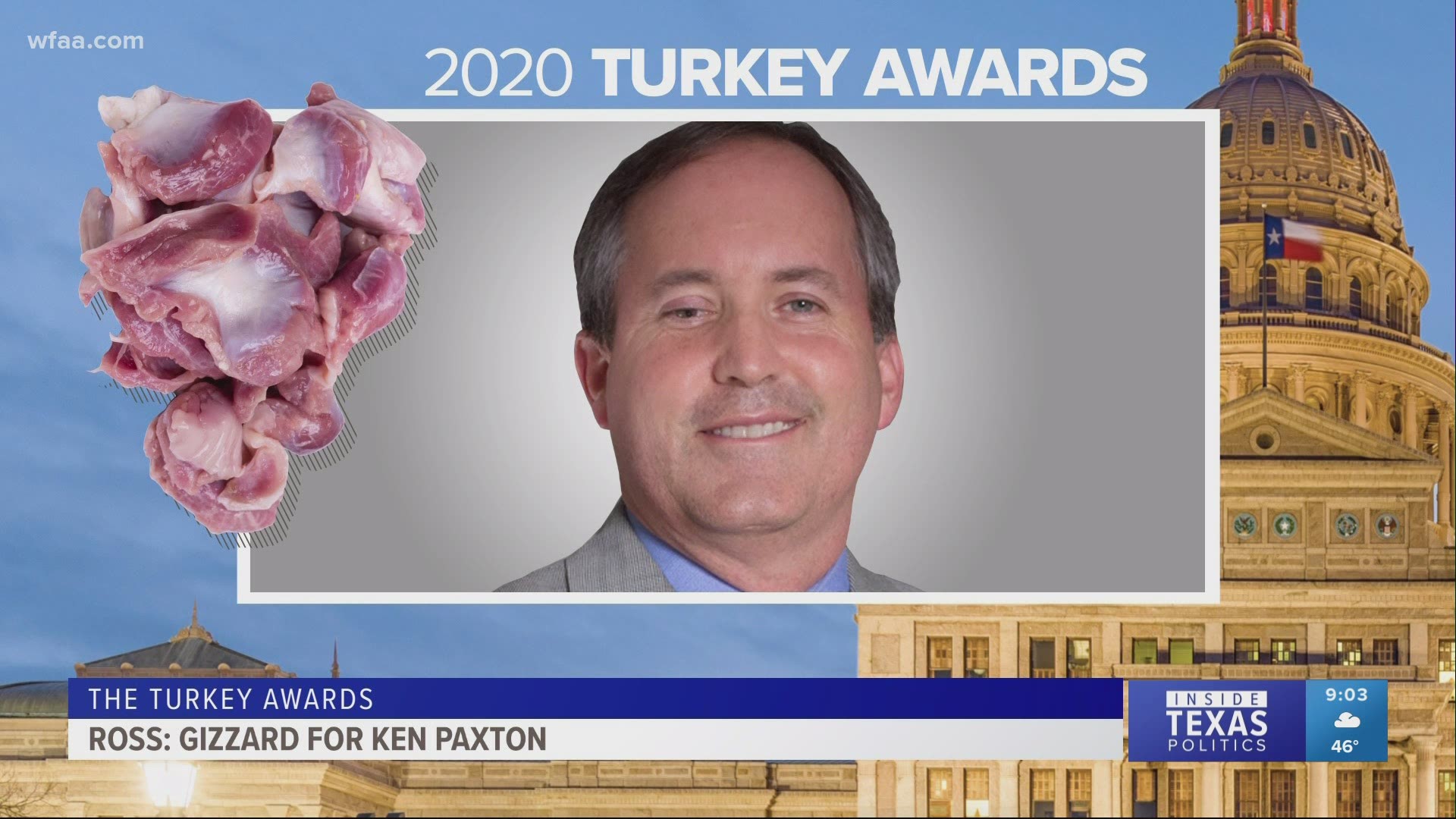 DALLAS — This week Inside Texas Politics presents its annual Turkey Awards. Every year at this time, we celebrate the great and not-so-great work our leaders have done throughout the year. We give those who have excelled through adversity a turkey leg and those who haven't been the best they could the gizzard.

From Jason Whitely: Democrat Dallas County Judge Clay Jenkins listened to doctors early on in the COVID-19 pandemic, made and stood by unpopular decisions, and abided by his own restrictions.

From Bud Kennedy: Republican Texas Governor Greg Abbott added a week of early voting and a week of early drop off for mail-in ballots, was sued for both actions. It wound up being a historical election, 11 million Texans voted, that went pretty smoothly.

From Ross Ramsey: Former interim Democratic Harris County Clerk Chris Hollins and other election officials put together a plan for making voting as easy as possible during the pandemic. Hollins added drive-thru voting, sent absentee ballots to people who didn't ask for them, and 24-hour voting.

From Berna Dean Steptoe: The Black Lives Matter movement that captured the world and was led by young people. These people gave voice to the fact that Black lives do matter through their protests, and they went out to vote.

From Jason Whitely: Republican U.S. Representative Kay Granger from Tarrant County, who told the president the election was over and the transition needed to begin. It was a risky move politically, but it was for the greater good of the country.

From Bud Kennedy: Dr. Peter Hotez and Dr. John Hellersteadt have been telling the truth throughout the year even as they have been told to be quiet. If we listened to our doctors more, we'd be better off.

From Berna Dean Steptoe: Republican Tarrant County Judge Glen Whitley who is still standing up for local control in the pandemic.

From Ross Ramsey: Hospitals and medical workers who have gone above and beyond during the pandemic to serve their communities. What haven't they done for us?

From Ross Ramsey: Republican Texas Attorney General Ken Paxton had eight top aides say he was using the powers of his office illegally and accepted bribes. The aides all resigned and were fired, and Paxton is currently under investigation by the FBI.

From Berna Dean Steptoe: Democratic candidate for U.S. Senate MJ Hegar for her campaign strategy in 2020. She failed to reach out to Sen. Royce West, and took Black voters for granted.

From Jason Whitely: Every Texas member of the U.S. Congress, who failed to pass financial support for the country even as unemployment rates remained high across the country, and in the state, due to the pandemic.

From Bud Kennedy: The Open Texas Movement protesters who wanted businesses open and mocked the concerns around the novel coronavirus. They put too much pressure on and caused some of the reopenings to happen too early.

From Ross Ramsey: Texas Democrats didn't produce in the 2020 General Election. They overpromised and underdelivered. The big question is where they go from here.

From Berna Dean Steptoe: President Donald Trump has tried to disenfranchise Black voters in battleground states, fighting to throw out votes in areas that are predominantly Black.

From Jason Whitely: Republican U.S. Rep. Louie Gohmert told voters they should consider a revolution over the election results. That rhetoric was uncalled for in the current environment.

From Bud Kennedy: Texas Governor Greg Abbott for four months he was a slow and steady leader on COVID-19, but has confused the state, businesses and residents are confused over where the rules stand, and what is and isn't allowed.