Police Chief Tim Gannon said he believes the officer who shot Wright meant to use her Taser. 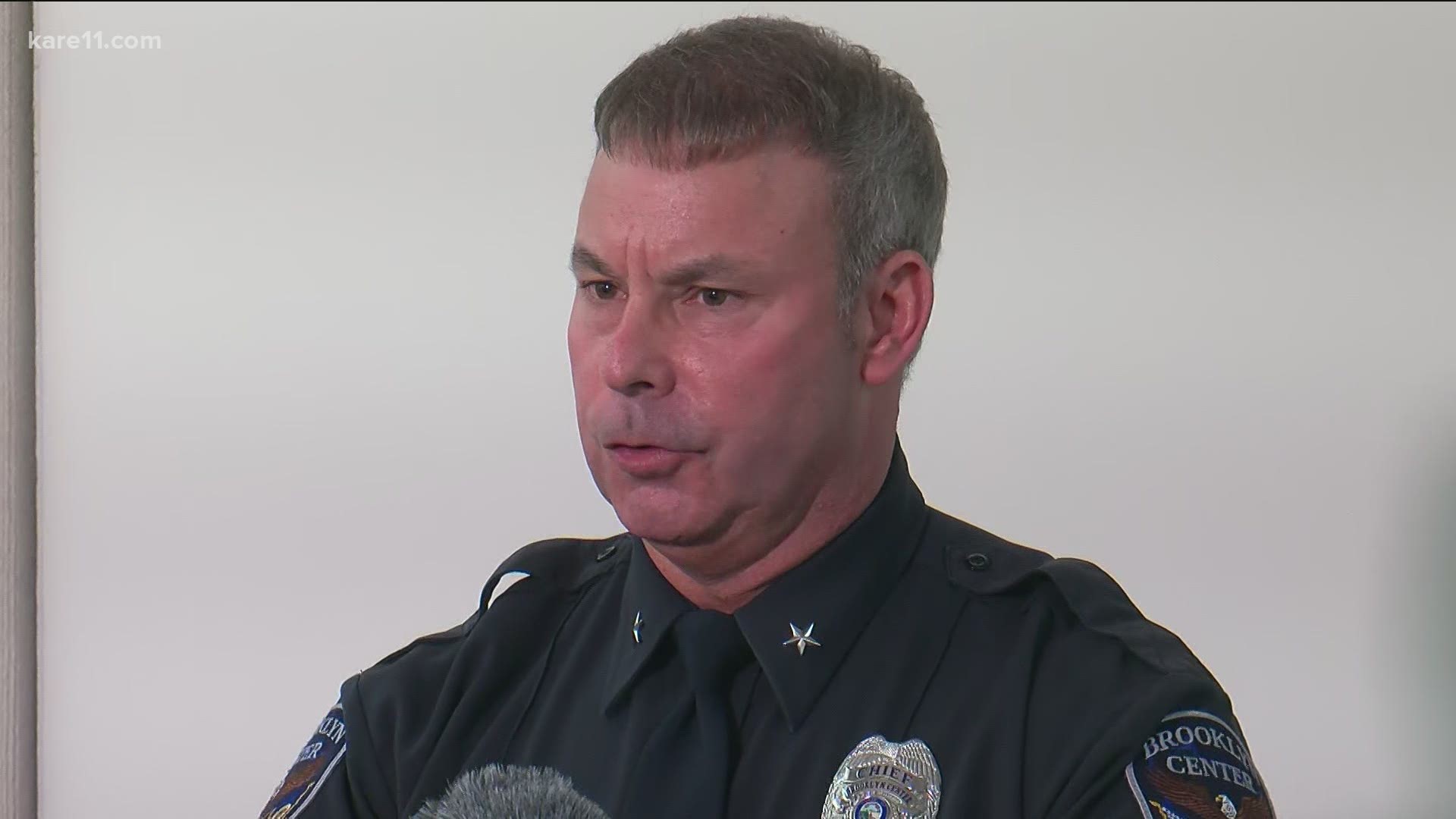 BROOKLYN CENTER, Minn. — Warning: Some elements of the press conferences and body camera footage are graphic. If you or someone you know have been affected by the content of recent broadcasts and are looking for mental health resources, contact the National Alliance on Mental Illness. NAMI provides guidance to those who are trying to navigate the mental health system. Please know you are not alone.

Minnesota Gov. Tim Walz has enacted a curfew in the Twin Cities metro counties Monday night after a Brooklyn Center police officer fatally shot a 20-year-old Black man during a traffic stop, fueling an evening of protests and unrest.

Walz joined Minneapolis Mayor Jacob Frey, St. Paul Mayor Melvin Carter and law enforcement officials to announce a state of emergency and a curfew in Hennepin, Ramsey and Anoka counties, which will go from 7 p.m. Monday until 6 a.m. Tuesday. Dakota County later announced that its residents are also under the regional curfew ordered by the governor. Certain essential workers will be exempt from the curfew.

The announcement comes hours after Brooklyn Center's police chief released body camera footage of the fatal shooting of Daunte Wright, and while the trial of former officer Derek Chauvin in nearby Minneapolis begins its third week.

Officers conducted a traffic stop before 2 p.m. Sunday due to expired tags, according to Gannon. During the stop, officers obtained Wright's ID and discovered an outstanding warrant. They then attempted to take him into custody. At some point Wright got back into his car, and one of the officers fired their gun and struck him, law enforcement officials said.

According to a press release from the Brooklyn Center Police Department, the vehicle then traveled "several blocks" before colliding with another vehicle.

In the body camera footage, an officer can be heard immediately telling the other officers at the scene, "I just shot him." 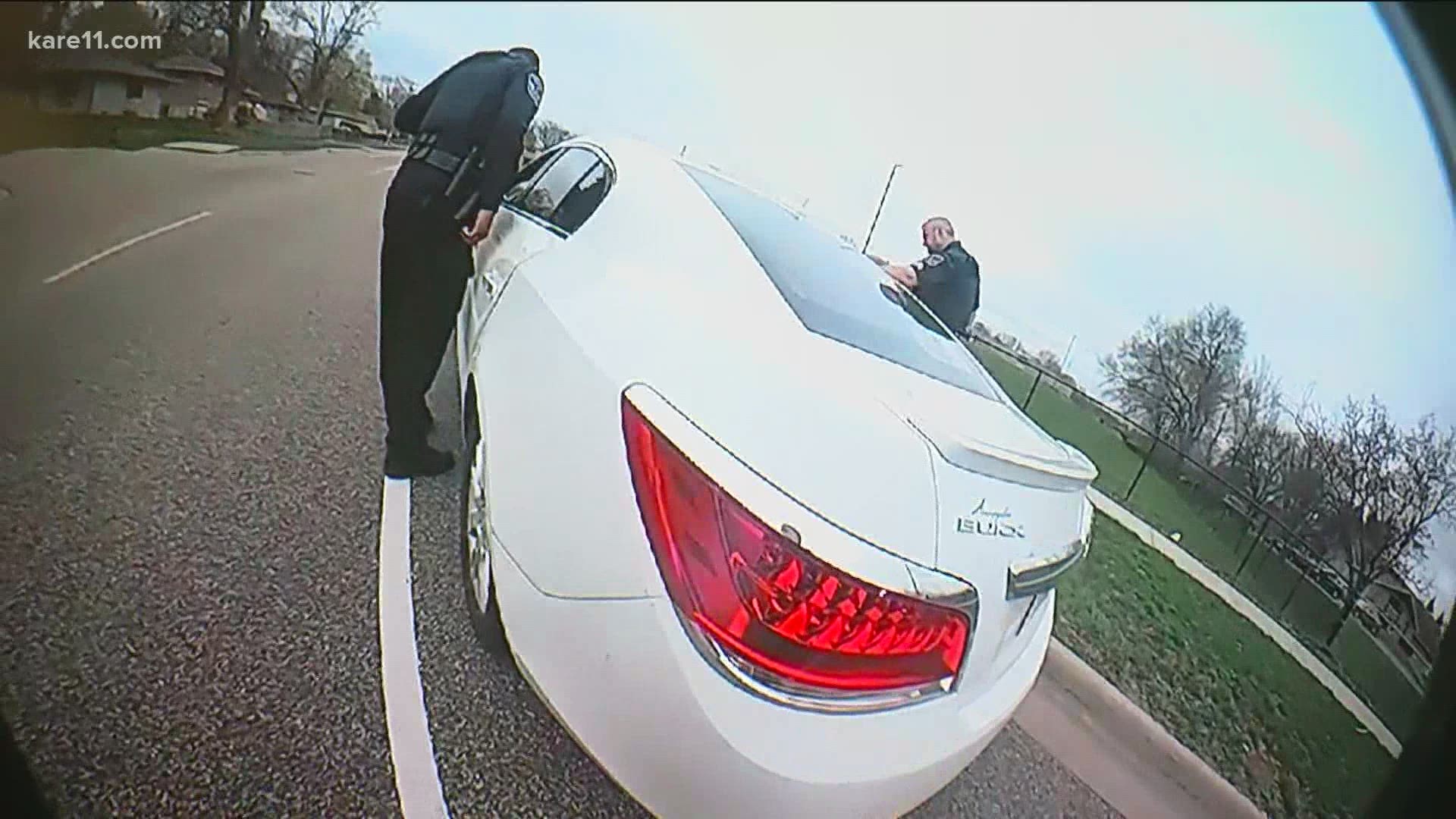 A female passenger in the car was transported to North Memorial Hospital with injuries related to the crash, according to the release. No injuries were reported by anyone inside the vehicle that was struck.

Wright's family first identified him as the driver who died at the scene.

Earlier Sunday, Wright's mother Katie told KARE 11 that her son called her while he was being pulled over to get insurance information for the vehicle, a car she recently gave to him.

"A minute later, I called and his girlfriend answered, which was the passenger in the car, and said that he'd been shot and she put it on the driver's side, and he was laying there lifeless," said Katie.

Wright's aunt, Kelly Bryant, has set up a GoFundMe page to raise money for his funeral and burial.

Gannon walked reporters and community members through his interpretation of the bodycam footage Monday.

"As you can hear, the officer, while struggling with Mr. Wright, shouts 'Taser, Taser' several times. That is part of the officer's training prior to deploying a Taser, which is a less lethal device," he said. "That is done to make her partners aware, as well as the subject, that a Taser deployment will be imminent."

Gannon said the officer instead drew their handgun.

He explained that officers are trained to keep their handguns on their dominant side, and their Taser on their "weak side."

"As I watch the video and listen to the officer's commands, it is my belief that the officer had the intention to deploy their Taser, but instead shot Mr. Wright with a single bullet," Gannon said.

Gannon said the Minnesota Bureau of Criminal Apprehension is investigating the shooting.

A group of community leaders held a press conference immediately after the police briefing Monday, calling for the city's police chief and the officer who shot Wright to be fired.

"We demand the firing of the officer involved, as well as the leader of the events that took place last night," Matt Branch said. "We demand better because we deserve better."

"Daunte Wright is yet another young Black man killed at the hands of those who have sworn to protect and serve all of us - not just the whitest among us," said Crump, who has also represented the families of George Floyd, Trayvon Martin, Ahmaud Arbery and Breonna Taylor, among many others. "As Minneapolis and the rest of the country continue to deal with the tragic killing of George Floyd, now we must also mourn the loss of this young man and father. This level of lethal force was entirely preventable and inhumane."

The NBA also announced that the Monday night game against the Minnesota Timberwolves and the Brooklyn Nets has been postponed.

Just got off the phone with the @WhiteHouse. I appreciate @POTUS reaching out to offer his administration’s support. pic.twitter.com/ejrttTOhlI

During a press conference Monday, President Joe Biden called for "a full-blown investigation," as well as "peace and calm" in the wake of the shooting.

White House press secretary Jen Psaki said it's "a reminder of the pain, the anger, the trauma, the exhaustion that many communities across the country have felt as we see these incidents continue to occur within just a few miles of where the tragic events happened just a year ago.

Crews on scene reported that multiple rounds of tear gas were fired by law enforcement in an effort to disperse the crowd.

Operation Safety Net, an organization formed to help with any potential unrest throughout the Derek Chauvin trial, held a briefing for the media early Monday morning. During the briefing, Minnesota Department of Public Safety Commissioner John Harrington addressed the civil unrest that stemmed from the shooting in Brooklyn Center.

This is the rue21 store in the Shingle Creek Crossing shopping center in Brooklyn Center. @kare11 pic.twitter.com/p0RaDpQky8

According to Harrington, numerous law enforcement agencies were called to assist as hundreds gathered outside of the Brooklyn Center Police Headquarters, and Minnesota State Patrol Colonel Matt Langer said that there will be an additional law enforcement presence, including the National Guard, in the area on Monday to continue to assist with any civil unrest.

According to officials, the unrest spilled over into Brooklyn Park, where police say a shot was fired at the front door of the Brooklyn Park police station. No one was injured, but police say the glass door was shattered. There have also been reports of "numerous businesses being looted," according to a release from Brooklyn Center police.

UPDATE: Looting has now spread to parts of Minneapolis. This cell phone store on East Lake Street, near Lyndale was hit. The front door apparently smashed by a rock. @KARE11 pic.twitter.com/Ik9jzVaPQz

The Sunday night shooting occurred as the trial of former Minneapolis officer Derek Chauvin plays out less than 10 miles away. On Monday, Chauvin’s defense attorney asked the judge to further question and sequester the jury due to his concern that the Brooklyn Center shooting and the unrest that followed will affect their ability to deliver an impartial verdict. The judge denied both motions.

Minneapolis Mayor Jacob Frey released a statement on the Brooklyn Center shooting Monday, calling it a "continuation of the unrelenting trauma felt by our Black community."

"Minneapolis stands firmly with the people of Brooklyn Center in seeking justice for Daunte Wright and peace in our cities," he said.