Verify: How much will Kevin Sumlin's firing cost Texas A&M?

Aggie fans have a lot of questions about the dismissal of the team's head coach, viewer Harry among them. He asked KHOU 11 to verify the total cost in the firing of the football coach at Texas A&M, including Sumlin and his assistant coaches. 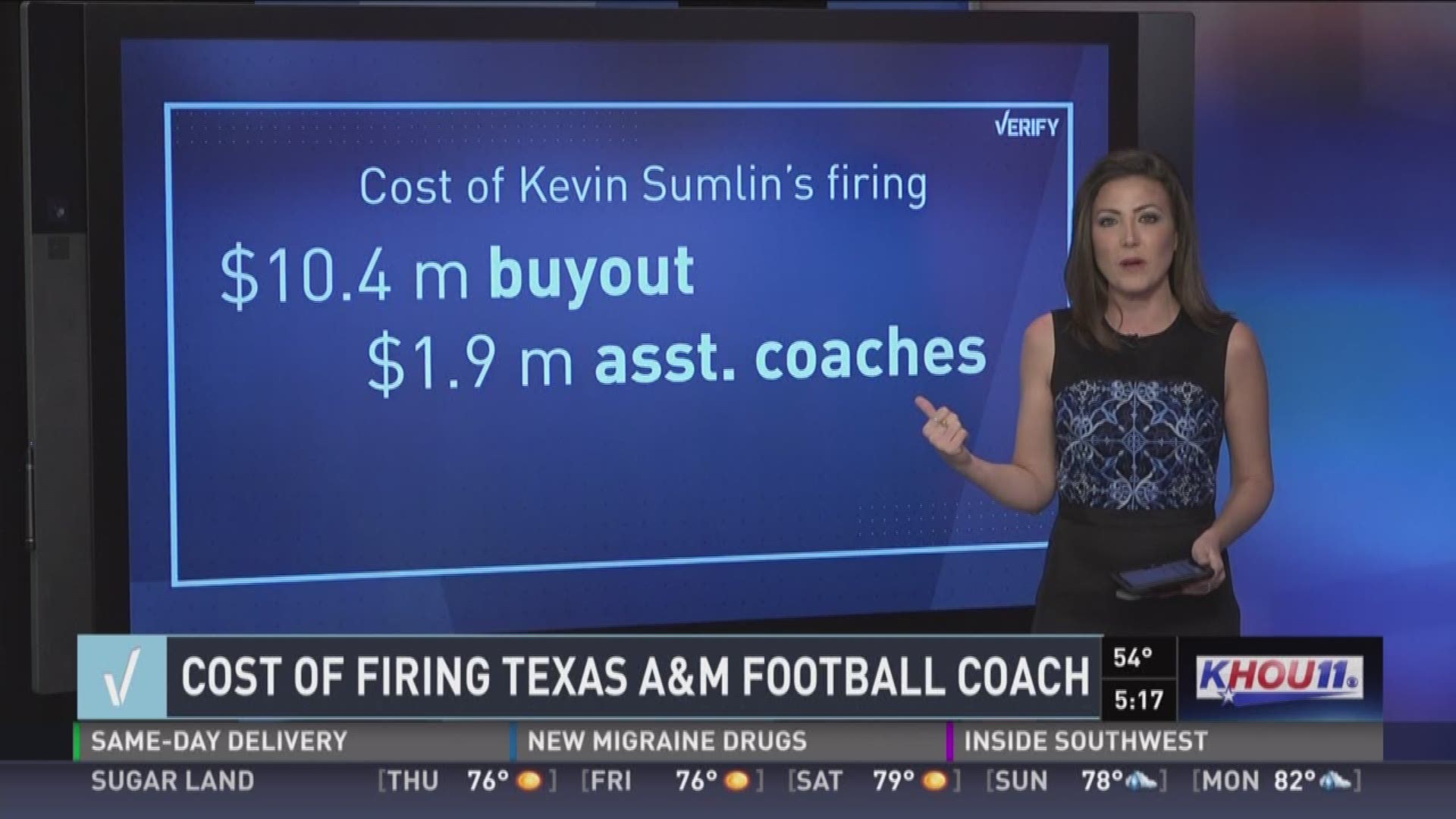 On Thursday, regents at Texas A&M will meet to talk about hiring a new football coach, which comes just a few days after the university fired Kevin Sumlin.

Aggie fans have a lot of questions about the move, viewer Harry among them. He asked KHOU 11 to verify the total cost in the firing of the football coach at Texas A&M, including Sumlin and his assistant coaches.

It’s a tough number to pin down, especially since a new coach could usher in some changes, but here’s what we know as of Nov. 30.

RELATED: A&M's firing of Sumlin means another big buyout for a Texas school

According to Sumlin’s 2013 contract extension, he’s entitled to a $10.4 million buyout, which he gets in full, no matter if he jumps to another job immediately.

A lot of times, when the head coach is out, so too are the assistants and the Aggies have some high-priced help on the sidelines. For example, in 2016, defensive coordinator John Chavis took home about $1.5 million, making him the top-paid assistant of any college football team in the country.

However, he is not one of four A&M assistant coaches with contracts that run into 2019. They are Noel Mazzone, Jeff Banks, Terry Price and Ron Cooper. According to USA Today, if they are let go, the university would owe them a combined $1.9 million. It could be less if they get a job somewhere else, but we won’t know what happens to them until the new guy takes over.

RELATED: Kevin Sumlin has been relieved of his duties at Texas A&M University

Another side to all this is how A&M funds its athletic department. In 2016, it brought in $194,388,450, the most of any college football program in the country. Of that, $47 million came from ticket sales, $75 million from contributions, $57 million from rights and licensing and $13 million has miscellaneous sources, but $0 came from student fees or school funds.

So, though we can’t accurately verify the total cost of firing of Sumlin until after a new coach is named, that money will not be taken from academics.