Eliminating eviction protections for renters could soon lead to an increase in homelessness. 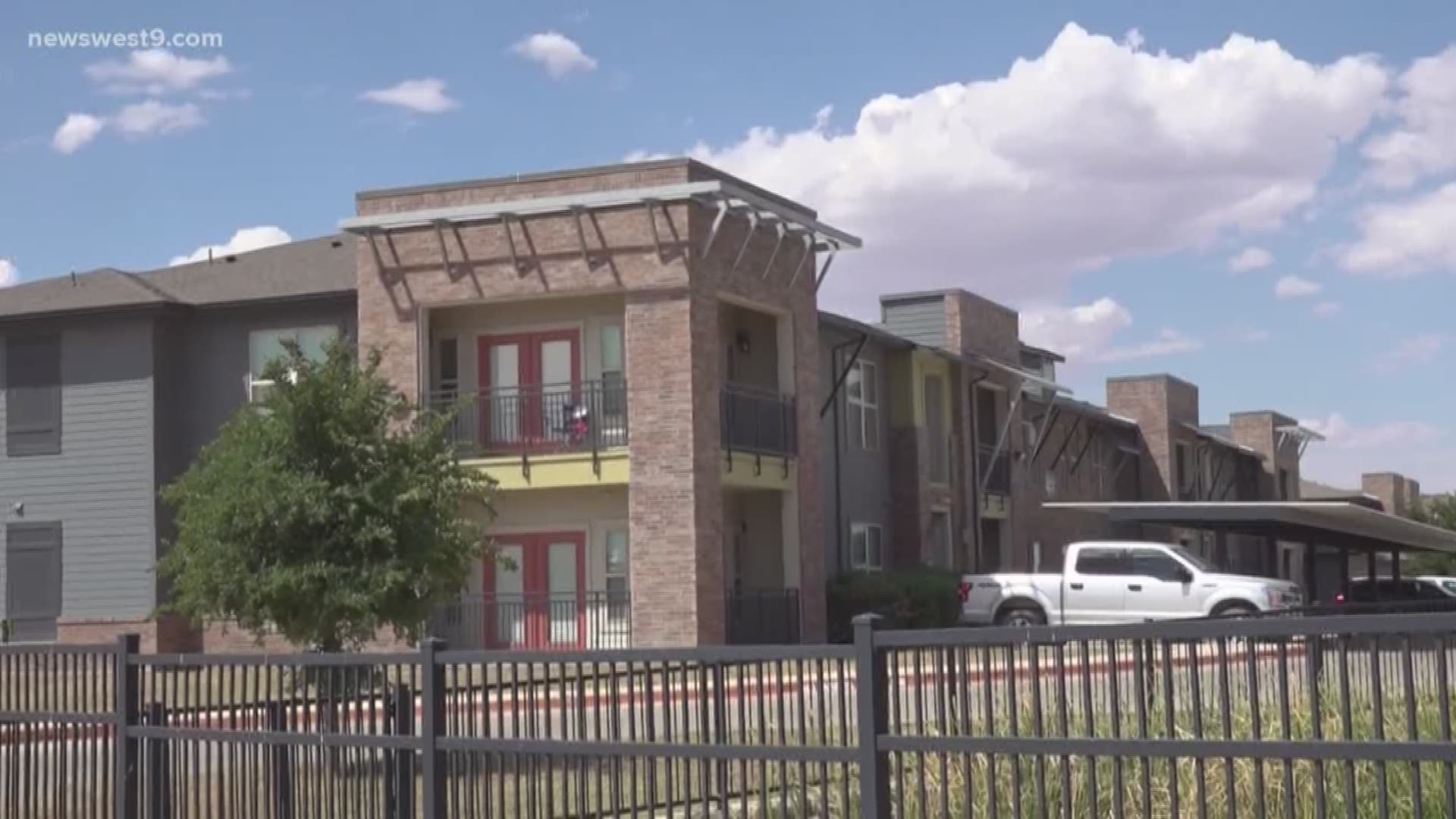 (The Texas Tribune) — Phoenix Morgaine doesn't want to move, but a “for rent” sign has been in the front yard of her Belton home for more than a month. Her landlord had already left a notice to vacate in her door at the start of April and on Tuesday was served with an eviction citation. As the coronavirus pandemic swept across Texas, her pet-sitting business almost fully stopped, and she was making a third of what she normally earned.

It wasn't enough to pay her rent.

“I told him, ‘I’m sorry this is happening, it’s out of our control,’” Morgaine said.

RELATED: Struggling families in Harris County could be eligible for up to $1,500 from new COVID relief fund

Morgaine, who pays her rent on the 23rd of each month, will owe $1,650 in rent plus utilities and other fees as of Saturday. The statewide eviction moratorium gave Morgaine some assurance that she wasn’t going to be forced out of her home during the COVID-19 pandemic, as the local authorities in Bell County, where she resides, haven’t been explicit in banning evictions. But as soon as the moratorium was lifted, she was served with papers.

Now she's among an unknown number of Texans facing eviction during a public health crisis and its parallel economic downturn. Housing advocates are warning that with more than 1.9 million Texans filing for unemployment relief in the last two months, eliminating eviction protections for renters could soon lead to an increase in homelessness.

“This puts a lot of renters in an even more difficult place than they were before, having to make difficult decisions between getting food on their table or a roof over their heads,” said Heather K. Way, director of the Entrepreneurship and Community Development Clinic at the University of Texas Law School. “There will be many people losing their housing, as they have fallen through the cracks of the different and limited eviction protections available.”

Need to keep tabs on the latest coronavirus news in Texas? Our evening roundup has you covered.

Need to keep tabs on the latest coronavirus news in Texas? Our evening roundup has you covered.

The number of people who could be impacted by lifting the eviction moratoriums is not known because there's no data available yet to understand who is covered by the patchwork of regulations existing in the state. But Way said affordable housing was already scarce in Texas and that renters have been disproportionately affected by the economic crisis created by COVID-19.

Officials at the Texas Apartment Association, whose 12,000 members include around 7,500 property owners and operators, said that landlords are also having to deal with the pressures caused by the crisis.

“For our members, evictions are always going to be a measure of last resource, and we are recommending them to work with residents that have been impacted by COVID-19. If a resident is having problems paying rent, we hope they reach out to landlords to work with them,” said David Mintz, vice president of government affairs with the Texas Apartment Association. “Property owners need to keep running properties, pay employees, vendors, mortgages, utilities and all the other expenses. There really has to be this balance that we need to meet.”

Renters at risk of being evicted have to make a tough decision: either leave on their own and try to find housing with limited or no money, or spending money fighting the eviction through a complicated legal process. If they don't leave on their own — or if they fight and still lose — they could end up having an eviction record that could damage their credit score.

“It’s a pretty quick process, and it is hard to navigate as a renter, especially since we have this patchwork of local and federal protections,” Way said. “The most important thing that people need to know is that the notice doesn’t mean you have to move. But once an eviction is filed and gets to your record, it can be very difficult to find a landlord to rent to you.”

In Texas, depending on the lease, landlords need to give between one and three days' notice to a tenant to vacate a home. After that, if a tenant doesn’t leave on their own, the landlord can file for an eviction with the local justice court. After that, a constable will try to deliver eviction lawsuit papers to the tenant or post them by their door.

Starting Tuesday, tenants will only be protected from evictions in specific cities and counties that have their own moratoriums. Some of these places include Bexar, Dallas and Travis counties. The University of Texas at Austin recently published a list of various cities' and counties' protections. People living in properties with federally backed mortgages are also protected through the federal Coronavirus Aid, Relief and Economic Security Act, which paused evictions for those homes until Aug. 23. The National Low Income Housing Coalition has created a searchable database with some of the buildings protected by the CARES Act.

“But we expect some landlords with federally related mortgages who are covered will file in violation of the CARES Act,” said Fred Fuchs, an attorney with Texas RioGrande Legal Aid. “Thus, tenants must not assume that they do not live in a covered property if they are served with an eviction lawsuit.”

In places that don't have their own moratoriums, eviction trials can resume May 26. An average process can last a month. If, through the process, a justice of the peace decides to evict a tenant, the person will have five days to appeal. If there’s no appeal, six days after the trial, a landlord can pay for a constable to bring a 24-hour warning to vacate to the tenant’s front door. If the person doesn’t move on their own within that day, the landlord or management company can take back possession and move the tenant's belongings to the curb of the street, with the supervision of a constable.

To appeal, tenants must either pay in cash or through an appeal bond, or issue a sworn statement to the justice court saying that they can't afford such a bond. They might have to pay one rental period within five days, and they will have to keep paying future rent either to the court or directly to the landlord.

“Depending on the docket of the county court at law and how quickly the landlord sets the matter for hearing, the case may remain pending for a few months,” Fuchs said. “This is quite complicated and almost impossible to navigate without an attorney. [There are] too many traps for the unwary.”

Experts recommend that tenants reach out for legal aid and to be clear on what their goal is.

“If a tenant wants to stay, the tenant needs to communicate with the landlord and discuss possible payment plans and see what the landlord will agree to,” Fuchs said.

Any agreement should be written to avoid miscommunications, the lawyer said.

“If the tenant cannot reach an affordable payment agreement and must move, the tenant should be aware of the eviction process and use the time period to focus on finding other housing and be prepared to pay rent.”

An eviction can have long-lasting effects. It can affect kids' educational outcomes, create stress for the whole family and remain on a tenant’s credit history for up to 10 years, making it more difficult to find a new place to rent or to apply for a mortgage.

“Most landlords will not lease to someone with a judgment of eviction on their credit record,” Fuchs said.

Advocates believe that lifting eviction moratoriums will eventually make it more difficult for people to stay healthy and will create more homelessness. Some cities are spending millions on rent assistance, only to see those funds drained quickly.

Thao Costis, president of Houston homeless service provider Search, said evictions cost people their personal belongings. And they can cost nonprofits and government programs money because it costs more to try and get someone housed and stable after they've been kicked out of their current home.

“We expect many will slip through the cracks due to insufficient resources, and complications or delays in accessing resources,” she said.

Advocates believe that an increase in eviction proceedings will happen pretty quickly, but the impact on homelessness won't be seen for months, given that unemployment benefits and the federal government's individual stimulus checks, among other assistance, will help people in the short term.

Morgaine was counting on using her stimulus check to pay the pending rent. But knowing that an eviction was likely changed her plans.

She said she will save that money for boarding her pets and paying for living expenses if she needs to leave her home.

“I’m afraid that he will take me to court, and I’ll have no money, and I’ll be living in the car,” Morgaine said.

But now, with the eviction notice served, she feels helpless.

“I don't know. Just have to prepare my defense for the judge,” she said Tuesday.

This story originally appeared May 19, 2020 in The Texas Tribune