Dirty deeds: An alleged real estate scam from beyond the grave

They were dead for years, yet they supposedly signed over their family homes to one Dallas man. 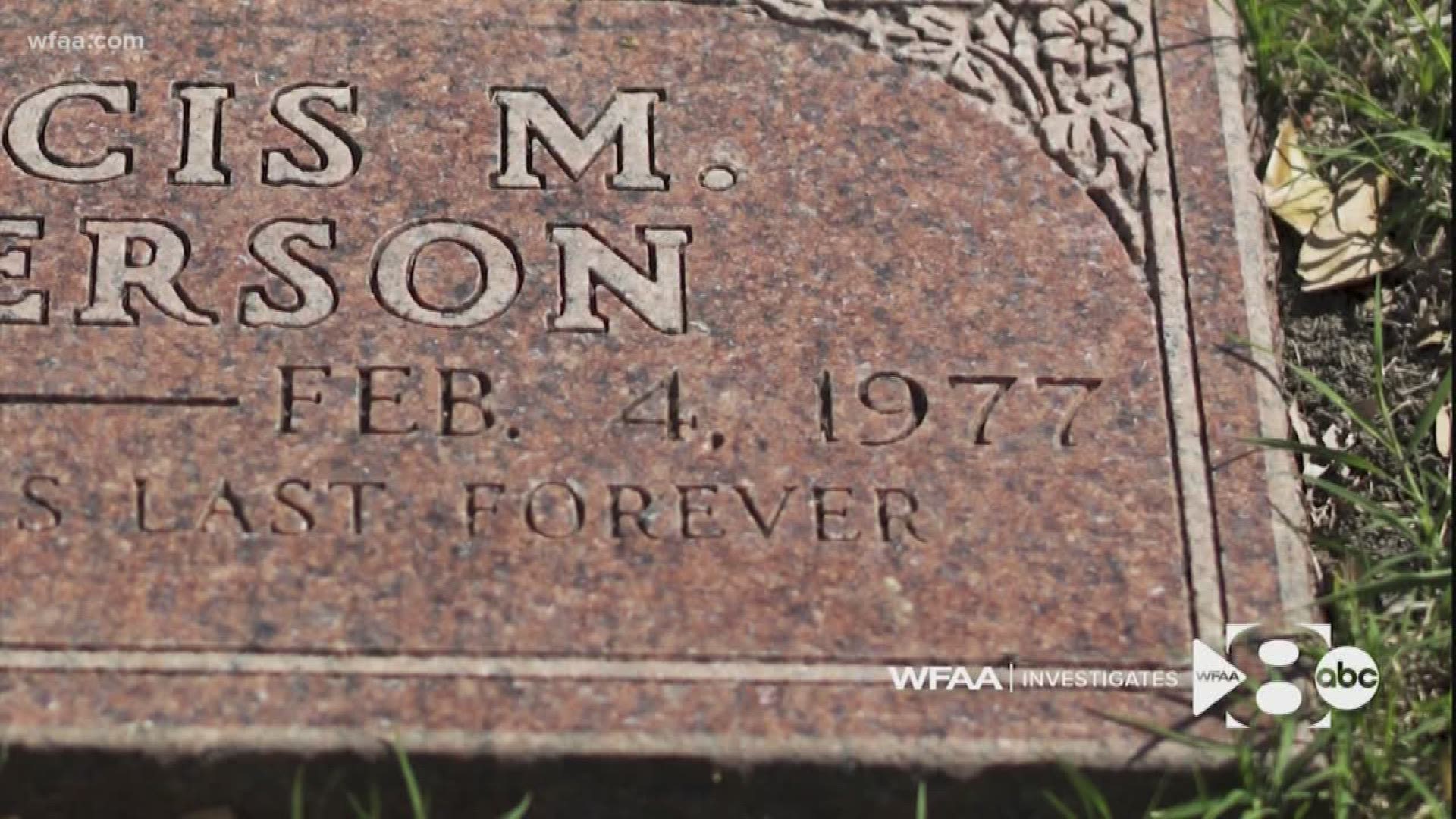 DALLAS — Paul Dodson’s great-grandparents died years ago, along with his grandmother.

So, how did their signatures recently appear on warranty deeds handing over the family home to a company operated by a Dallas-area real estate investor?

“I was floored,” Dodson told WFAA. “I really could not believe the home had sold and anything had happened with it. It was devastating news.”

A WFAA investigation found more than a half-dozen properties had been deeded over to companies owned by a man named William Baldridge under questionable circumstances.

In Dodson’s case and several others, there are signatures of dead people on the deeds, while in others, WFAA found signatures of people who do not appear to exist.

Baldridge later sold the homes, often for cash. Mesquite police searched his home earlier this year, seizing laptops, paperwork, and phones, as part of an investigation into alleged real estate fraud involving a Mesquite home and “multiple other properties in Dallas County.”

Baldridge declined to speak to WFAA when approached outside a court hearing last month.

“I believe from my research that this goes back many years and that there are other people involved,” attorney Carla Rankin told WFAA.

Rankin, who represents Baldridge’s ex-wife in a battle over alimony and child support, said she uncovered the questionable deed title transfers while researching his finances and saw his phone number on a Houston real estate listing.

She told WFAA she discovered a warranty deed transferring title of the property that had been signed by an individual who died years earlier. The property had been conveyed from one Baldridge company to another, records show.

“From there, it’s been a continual find of houses,” Rankin said, involving deed title transfers signed by individuals who “passed away and have been deceased for many, many years.”

The home of Dodson’s great-grandparents is a case in point.

“When my mother found out the news, she actually began crying,” Dodson recalled.

Both warranty deeds were notarized by Kelsey Nixon. She declined to comment when asked about the signatures when WFAA approached her outside a court hearing in April.

Lawyers representing Baldridge’s ex-wife subpoenaed Nixon to appear in court. The subpoena included a demand that she bring her notary book to the court hearing. The attorneys wanted to question Nixon about notarized deed records connected to property ownership transfers to Baldridge-related companies.

Nixon, however, told the court she couldn’t find the notary book.

Baldridge also failed to turn over his notary book to the court. Last December, he received a subpoena to bring it to court. When asked under oath if he had a notary book, he testified that he didn’t know where it was located.

So, who is William Baldridge?

Court records and transcripts show he’s a real estate investor who has left a trail of millions of dollars in debt and thousands of dollars in unpaid taxes.

Fifteen years ago, he owned a company called Tri-Mark Realty Investments, which operated more than 7,000 apartment units in 20 cities, according to a creditor’s meeting transcript in the 2013 bankruptcy case. His company employed hundreds of people, according to court records. And he once owned a $3 million home.

The U.S. Labor Department sued him in 2010, alleging he’d failed to put his employee’s 401k contributions into their accounts and used the funds from the pension plan to benefit himself.

Baldridge never responded to the lawsuit.

He acknowledged under oath in 2013 that he hadn’t filed a tax return for years.

Baldridge testified in 2013 that his alcoholism contributed to his problems.

"The wheel just came off," he testified during a creditor’s meeting.

He’s been convicted of driving while intoxicated three times – first in 2008 in Tarrant County and twice in Dallas County, most recently in 2018.

Records from earlier this year show he owes thousands of dollars in back child support.

It was during that battle that his ex-wife’s attorney, Rankin, began looking into his finances, and then contacted law enforcement with her concerns.

Mesquite police have begun to investigate.

In a February search of his home, a Mesquite police detective cited the circumstances surrounding the deed transfers of two homes.

In one case cited in the search warrant affidavit, Sally Gene Morrison conveyed a home on Meriden Lane to Harris CT Tax LLC, one of Baldridge’s companies. Baldridge notarized the deed in 2018.

Yet Morrison died in 1996, according to the search warrant affidavit.

“It is an impossibility for Sally Gene Morrison to have signed this General Warranty Deed as she has been deceased for more than 20 years at the time William Baldridge notarized this deed,” Mesquite Det. K. Smiley wrote in the affidavit.

Morrison’s signature is one of several signatures of dead persons connected to the Mesquite case.

In another example cited in the search warrant, individuals whose signatures appear on the deeds denied having signed it.

Yet those people are not married at all, according to Det. Smiley.

Smiley interviewed the family and learned that the "married couple" is actually a brother and sister. The detective, in his affidavit, said he spoke with the brother, who denied having signed that deed.

In fact, he told the detective that he “has never signed any paperwork on the residence aside from when he purchased it in 2007,” according to the search warrant affidavit.

The current owner told police he bought the Haddock Street home for $75,000 and closed on the home at a title company in Dallas. He also told the detective he’d spent a large amount of money remodeling it so he could live there.

In his affidavit, the detectives wrote that there were “commonalities” with the Mesquite property deeds, including similar addresses, even though the addresses have “no affiliation with each other.”

The detective wrote that he was investigating “multiple other properties in Dallas County” involving Baldridge and his registered company, Harris CT Tax LLC.

WFAA’s investigation also uncovered similar concerns on other properties. And the problems were not just happening in Dallas County, but also Harris County.

Ruby Roman’s family lived down the street from Korean War veteran John Kiel for years. There were many evenings spent as a young child at his picnic table listening to war stories.

A few years ago, she and her husband, Will Davis, moved back into the neighborhood and fixed up the home she grew up in. They grew close to Kiel, a retired architect, and helped him out as his health declined.

Kiel was hospitalized and ended up in a nursing home before dying in 2016.

Only Roman, Davis and other neighbors attended Kiel’s funeral. No long-lost children showed up, the couple said.

They still have American flag from his funeral and shells from the 21-gun salute, as well as a portrait of a much-younger Kiel.

“I personally know how much pride John took in his property,” said Roman, who along with her husband, works for the Houston Police Department.

Kiel died without leaving a will, records show. Yet a year after Kiel died, an affidavit of facts notarized by Baldridge was filed in Harris County.

The affidavit named two people, “Robert P. Smith” and a “Cynthia Peters,” as being “personally familiar with the family and marital history of John Henry Kiel.”

It described “each as a long family friend.”

The next month, November 2017, “David M. Kiel” handed over the property to Baldridge’s company, Harris CT Tax. Baldridge notarized the deed. The home was soon put on the market for $150,000, records show.

But according to Kiel’s Veterans Affairs records, he “never married” and had “no children.” The couple said he never mentioned having a child.

“If he had a kid, he would be talking about his son every time we saw him,” Davis said.

Neither of them had heard of Kiel’s supposed close friends Smith or Peters.

When confronted by WFAA, Baldridge refused to answer if he ever met David Kiel, Robert Smith or Cynthia Peters.

The alleged home address listed for “David M. Kiel” shows up on other affidavits for heirship for at least one other property involving Baldridge.

The names “Robert Smith” and “Cynthia Peters” also shows on other affidavits of heirship connected to Baldridge’s companies. Smith and Peters claim to be “long family” friends for deceased owners of homes in both the Dallas and Houston area.

Will Davis told WFAA he could not understand how someone could allegedly just type up a document and claim that they’ve known a person for a long time and “and by the way, this is his son” in order to convey property.

“It’s really upsetting to know that someone would do that to John,” Roman added.

Roman and Davis had tried to buy the Houston property upon learning it was for sale. They even wrote a personal letter explaining their fondness for Kiel.

“John’s home is part of this neighborhood and was his biggest pride,” Davis wrote. “We would feel much honored to own the property to maintain the integrity and all the great memories.”

The seller did not ultimately go with their bid. For that, they are relieved because they would have paid money for a house that may have a clouded title and not really be theirs.

But how do questionable deed transfers occur?

Dallas County Clerk John Warren said with limited staff it is impossible to check the veracity of each filed deed document.

“There’s no way for us … to determine if it’s a clean deed or a dirty deed,” Warrant told WFAA.

“With the volume we record, it would be literally impossible,” he said.

If his clerks did have that responsibility, he said he would have to employ a lot more clerks. Otherwise, the clerk’s office would come to a near standstill.

He suggests that people sign up for property fraud alerts on the clerk’s website. The system will alert property owners any time there’s a document recorded.

Index
Data Privacy Statement: All information entered into the Property Fraud Alert site is used exclusively for the tracking and notification of recording activity. The owner of this website (Fidlar Technologies) agrees to never resell this information to any individual or company.
Fidlar

For now, the system relies on notaries verifying people’s identities.

To perpetrate a fraud, all a scam artist needs to do is find a willing notary or be a notary themselves, several knowledgeable sources told WFAA.

Rankin wants to see a change in the law that would require “checks and balances” before a deed is transferred. That could include requiring that driver’s licenses or some other identification be provided on the paperwork.

Dodson also wants to see laws tightened, His family now plans to sue to gain the return of what they believe is their rightful property.

“We have documentation showing that the family members are deceased,” Dodson said. “We have death certificates for all of them. We’re going to do everything in our power to get the home back to where it should be.”

The new owner of the Dodson family home told WFAA he’s not sure what to do knowing the house might not be his. He said he went through a title company and he would have thought they would have done their own research.

“You create a problem where everyone loses except the people involved in the scam,” Rankin said.

One thing is for sure: Dodson’s deceased relatives did not create a problem. They did not rise from the dead to sign deeds.