The engineer, who is calling herself Jane Doe, alleges she was secretly recorded in 2015 while working on Deepwater Invictus. 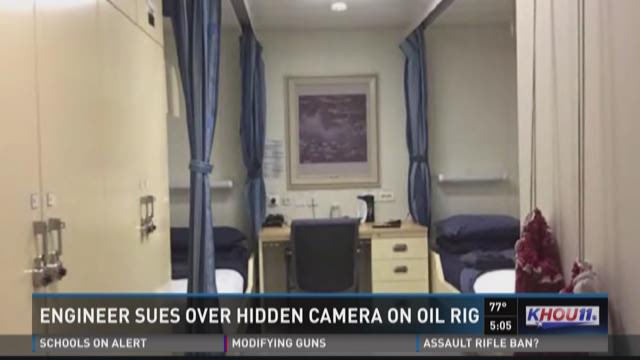 An engineer has filed a million dollar lawsuit, claiming she found a hidden camera in her bedroom on an offshore oil rig.

The engineer, who is calling herself Jane Doe, alleges she was secretly recorded in 2015 while working on Deepwater Invictus.

“When she went out to her hitch, she has a bedroom that’s hers. Its private to her. She discovered a coat hanger,” said Kurt Arnold, her attorney.

He says the hanger was in Jane’s room for a couple days, then disappeared. It later showed up in another woman’s room, according to the lawsuit.

Arnold alleges the second female employee realized the coat hanger was a spy camera, then went to management.

Arnold claims there was no criminal investigation, even after the defendants discovered the employee who allegedly installed the spy camera.

“It’s not only an issue of a spy camera being placed in a young lady’s room, it’s an issue of what these offshore companies didn’t do. They require everybody leave their doors unlocked. They have no cameras in the hallways,” said Arnold.

Although Schlumberger generally doesn’t comment on litigation, a spokesperson sent the following statement Tuesday due to “the profound lack of supporting facts” in the case.

“There is absolutely no evidence that anyone actually took any videos or photos of Ms. Doe in her room or anywhere else on the drilling vessel. Indeed, the hidden camera referred to in this case was not even found in Plaintiff’s room. Immediately following the discovery of the camera by another employee, an investigatio was conducted. Various law enforcement authorities were contacted following the discovery of the camera, but none of those authorities launched any further investigation.”

However, Jane Doe’s attorney claims she was so emotionally impacted by the incident, she can no longer work offshore.

“If they had answered some basic questions, done the right thing, and locked down the rig, and called the authorities, we wouldn’t be here,” said Arnold. “If this were to happen onshore with all the various things you hear about on the news, it would be an extremely big deal. I think the fact that it happened offshore, it’s almost easier for them to push it aside.”

The trial date has been set for March 19.