He was previously named a person of interest in her disappearance. 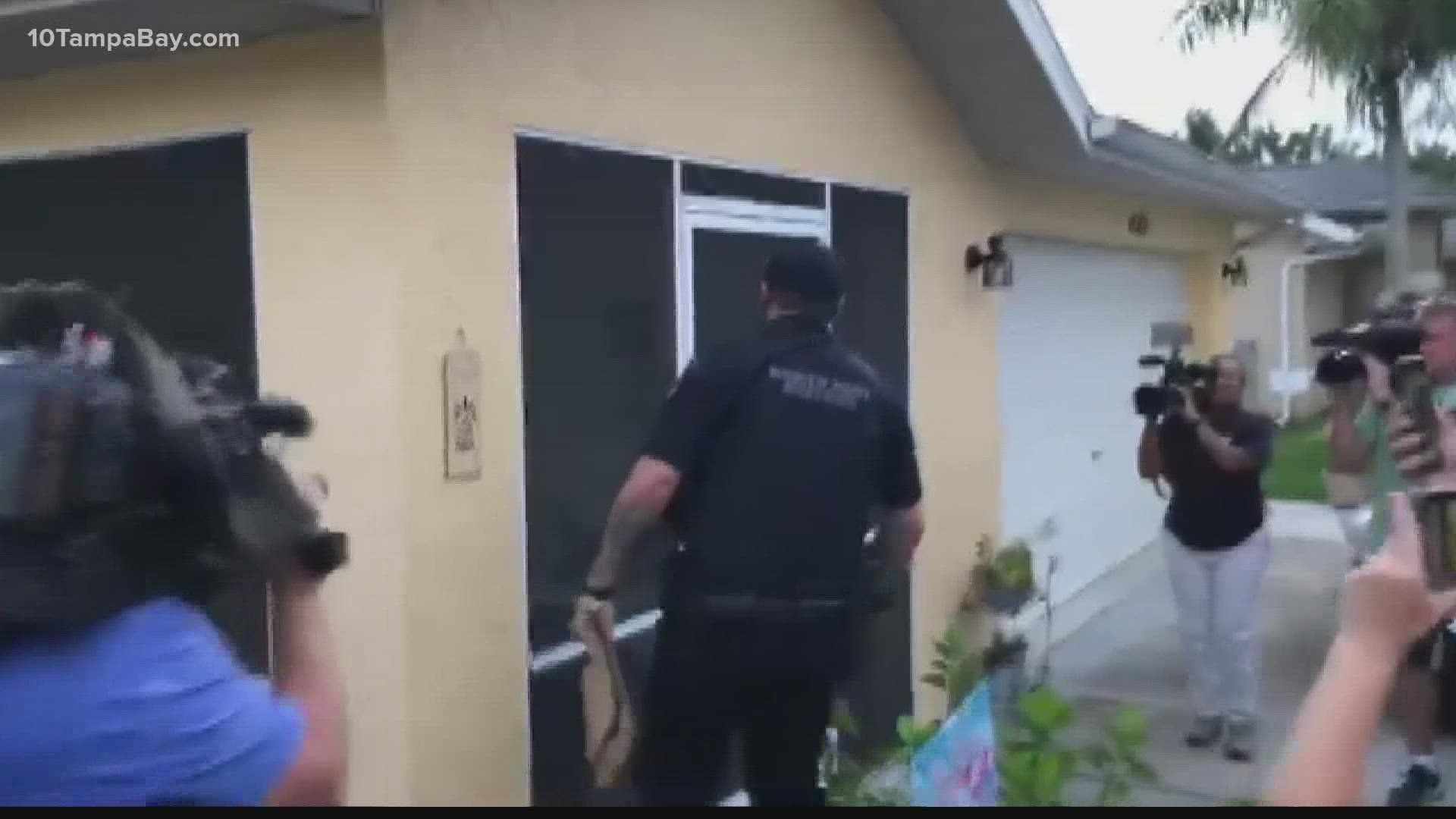 SAD UPDATE (Sept. 21, 2021): The FBI announced Sunday night that a body had been found matching the description of Gabby Petito. On Tuesday, the coroner confirmed her identity and ruled her death a homicide. Click here for the latest updates.

Gabby Petito is still missing. Now, the 22-year-old’s fiancé has vanished, too.

Brian Laundrie’s lawyer told 10 Tampa Bay his whereabouts are “currently unknown.” He adds that Brian was last seen by his parents Tuesday morning.

In a statement from the Petito family's attorney, the family said that "...Brian is not missing, he is hiding. Gabby is missing."

The North Port Police Department says the attorney for the Laundrie family called FBI investigators Friday night to say they'd like to speak about their son's disappearance.

The FBI went to the Laundrie family’s house in North Port, where they removed property investigators hope will help find Brian.

“The FBI is now looking for both Gabby and Brian,” his attorney wrote.

Laundrie is considered a person of interest in Petito’s disappearance after coming home from a cross-country road trip without her.

Investigators, including members of the North Port Police Department, went into the Laundrie home around 6:30 p.m. Friday – not long before a vigil for Gabby was scheduled to begin nearby.

“The conversation at the Laundrie home is complete,” North Port Police Chief Todd Garrison tweeted. “Once we have the details, a statement will be made. We ask for calm! Please let us work through this and information will be forthcoming.”

The conversation at the Laundrie home is complete. Once we have the details, a statement will be made. We ask for calm! Please let us work through this and information will be forthcoming.@NorthPortPolice

A crowd of people gathered outside the house Friday, many holding signs demanding answers from Brian Laundrie – not knowing he wasn’t home.

People with loudspeakers chanted “where is gabby” and “you can’t hide forever.”

Petito’s family has begged the Laundrie family for any information they might have that could help lead to Gabby. In a recent statement, the Petito family called Brian’s silence “reprehensible.”

Officers walked into the home with paper evidence bags.

Before he disappeared, police say Laundrie returned to North Port on Wednesday, Sept. 1. That would have been 10 days before Petito's family reported her missing after not being able to reach her.

Police first went to the Laundrie home on that Saturday to speak with Brian and his family, but were instead handed information for the family's attorney, officers said.

The counsel for the Laundrie family released another statement late Wednesday evening, saying in part:

"Many people are wondering why Mr. Laundrie would not make a statement or speak with law enforcement in the face of Ms. Petito's absence. In my experience, intimate partners are often the first person law enforcement focuses their attention on in cases like this, and the warning that "any statement made will be used against you" is true, regardless of whether my client had anything to do with Ms. Petito's disappearance. As such, on the advice of counsel, Mr. Laundrie is not speaking on this matter."

“She’s like a sister, and my children love her, and all I want is for her to come home safe and sound and for this to be just a big misunderstanding," Cassie said to GMA.

RELATED: The disappearance of Gabby Petito: What we know so far