As the virtual school year arrives, the TEA confirms it may take two to 10 weeks for laptops and WiFi hotpsots to be delivered to school districts. 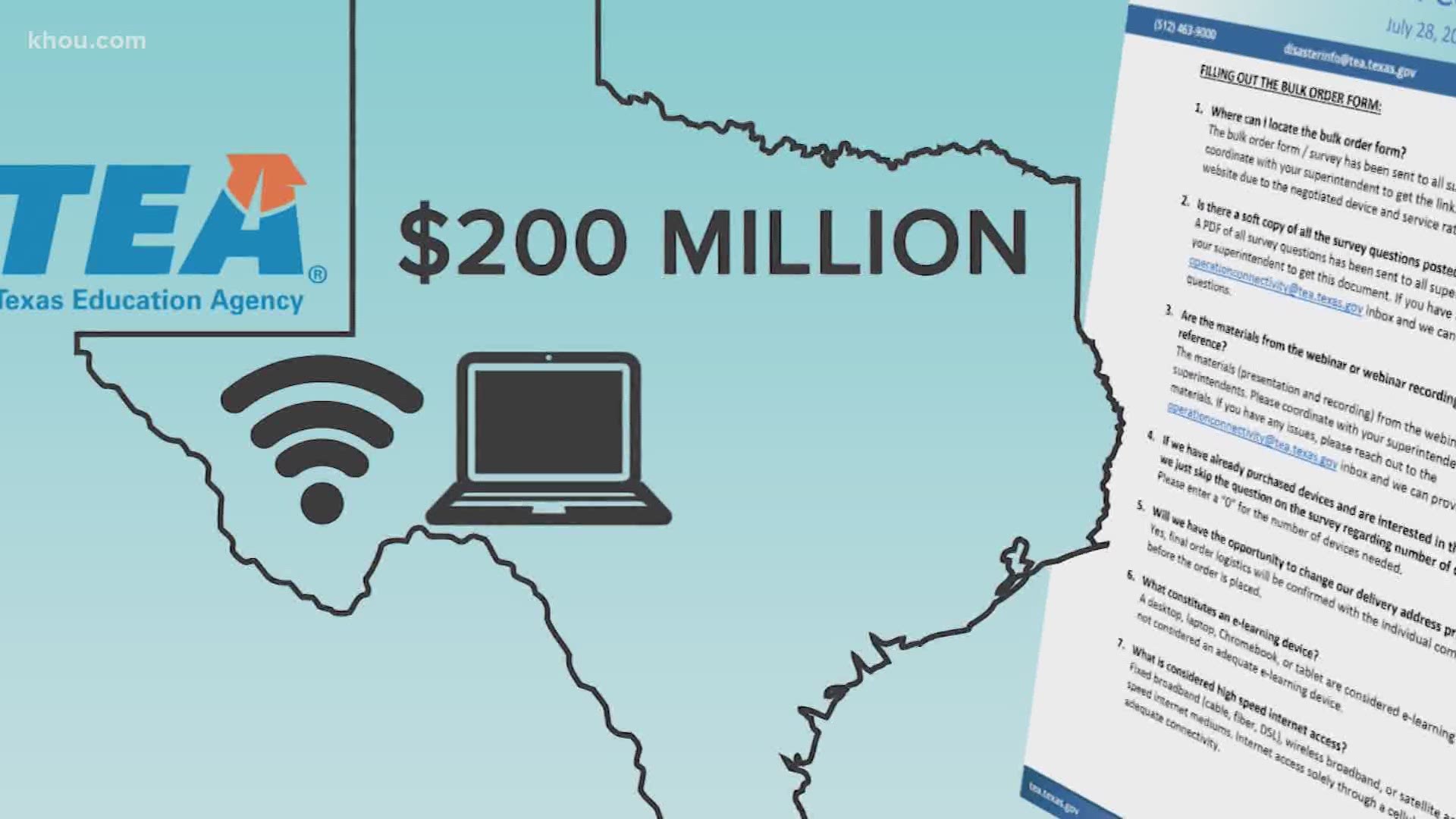 HOUSTON — A Texas-sized demand for computer devices combined with a global supply chain setback will mean school districts will have to wait up to 10 weeks before devices are in the hands of students who need them, KHOU 11 Investigates has learned.

“I wish we could all go on Amazon and hit a button and have it all show up,” said Gaby Rowe.

Rowe is the project lead for Operation Connectivity, a statewide initiative to tackle e-learning obstacles students are facing across Texas. In May, Abbott dedicated $200 million in CARES Act funding for the project.

As the virtual school year arrives, the TEA confirms it may take two to 10 weeks for laptops and WiFi hotpsots to be delivered to school districts. Rowe said it’s not as simple as placing an order online.

“At any given moment in normal times, you have maybe half a million devices in warehouses anywhere in the United States,” Rowe said.

Texas school districts have requested double that amount: 1 million devices, plus another 480,000 hotspots, according to the TEA.

“As a result, we had to think the way a manufacturer thinks,” she said.

That involved identifying where component parts, like computer chips and screens are made and the countries where they get assembled. For instance, a number of manufacturers use Chromebook touchscreens made in Chinese factories that were shut down for some time due to COVID-19.

“They have started back up, but that presents a pretty big hiccup in the global supply chain,” Rowe said.

But the former principal-turned-technology consultant had a running start in navigating those supply chain setbacks and negotiating favorable prices for a bulk order of computers and hotspots. Earlier this year, Houston Mayor Sylvester Turner appointed the former principal-turned-technology consultant as chairperson of the city’s Health Equity Task Force Technology Access Committee. She made inroads with industry partners such as Dell, HP and Lenovo, as well as wireless service providers Verizon, AT&T and T-Mobile. When the Operation Connectivity Task Force was formed, Rowe was a natural fit to lead the massive procurement project.

“No one is going to be getting devices into kids’ hands than we are,” she said.

While some Texas students will not have connectivity right when the virtual school year begins, Rowe said she’s confident manufacturers will ship to Texas schools before other states.

“I can’t make miracles happen in our supply chain, but I can guarantee that we will be first in line.”