KHOU 11 Investigates crunched the numbers to find out where violent crime is intensifying in and around the Houston area. 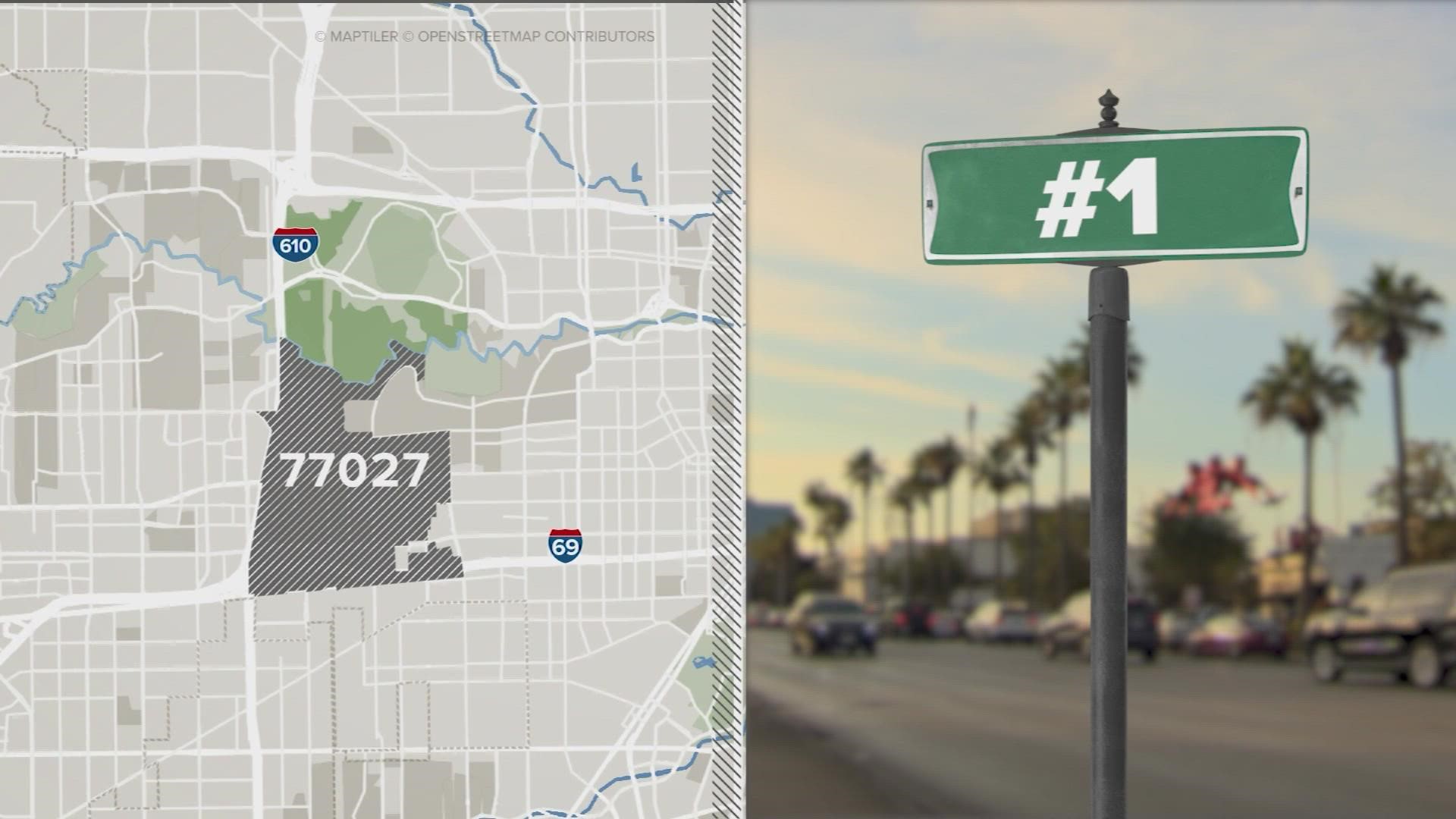 HOUSTON — From shootings to robberies in high-end shopping spots, KHOU 11 Investigates has been taking a look at violent crime and what neighborhoods are seeing the biggest increase.

If you take a drive around Houston, from neighborhood to neighborhood, you can't always tell where violent crime is on the rise.

KHOU 11 Investigates crunched the numbers to find out where violent crime is intensifying. Looking at Houston ZIP codes with at least 50 violent crimes, here are the three that have increased the most since 2019.

No. 3 is 77075, which is just south of Hobby Airport. Violent crime is up 58% in that ZIP code. There are a lot of apartment complexes and we found reports of a lot of murders, robberies and assaults.

"We have an apartment enforcement unit, so it's not just the criminal aspect of it but it's quality of life issues," said Belinda Null, Asst. Chief for the Houston Police Department. She said HPD works with apartments throughout the city to curb crime.

Null oversees the criminal investigation command. She said the department is data-driven and moves assets based on where crime is increasing.

"Different areas within the city have specific issues -- whether it's population density, a prevalence for gang crime -- and so the commanders of those areas are always looking at what issues they may be having, what resources they need," Null said.

The No. 2 ZIP code on the list is 77019. It stretches from River Oaks to near downtown along Buffalo Bayou Park. Violent crime in that ZIP code is up 65%.

"Along Allen Parkway, a lot of people park their vehicles to go run," Null said. "Criminals are going to go where they get the biggest bang for their buck."

"You're almost afraid to go into these shopping centers again," said Rosa Chu, a woman who KHOU 11 News interviewed in May.

These shopping centers have become targets for thieves going after high-end watches, purses and cars.

"They are pros. They know what they were doing," said a man named Jay who KHOU 11 also interviewed in May.

The spot with the most activity is at the CVS on Westheimer and 610. It's the same shopping center where New Orleans Police Detective Everett Briscoe and his friend DJ Riculfy were killed.

CHECK OUT THE INTERACTIVE MAP BELOW TO SEE THE CRIME NUMBERS IN YOUR NEIGHBORHOOD:

HPD arrested two men in connection with that deadly shooting.

Weeks later, HPD announced they had made two dozen arrests of people accused of running a crime ring in the Galleria area.

KHOU 11 asked HPD if they are confident they shut the ring down.

"I know we made a lot of good arrests in that," Null said.

To citizens who look up and see the violent crime in the headlines, there's something she says we all can do.

"I would say, there are still really good people in the city. Just to recognize that they are part of the equation, and the Houston Police Department can't do everything by ourselves, we need our citizens, we need our communities to be involved," she said.

When we looked at the numbers, there is a downward trend. Violent crime dropped 5% across the city from last year, but it's still higher than it was pre-pandemic.

KHOU 11 News reached out to CVS for comment on violent crime.

"Retail crime is a challenge to our entire industry, and we work closely with law enforcement on these matters. The safety of our customers and employees is a high priority and we have security measures in place to help ensure our stores remain safe environments to work, shop and fill prescriptions."