A $300 car wash? That’s what one Houston agency pays 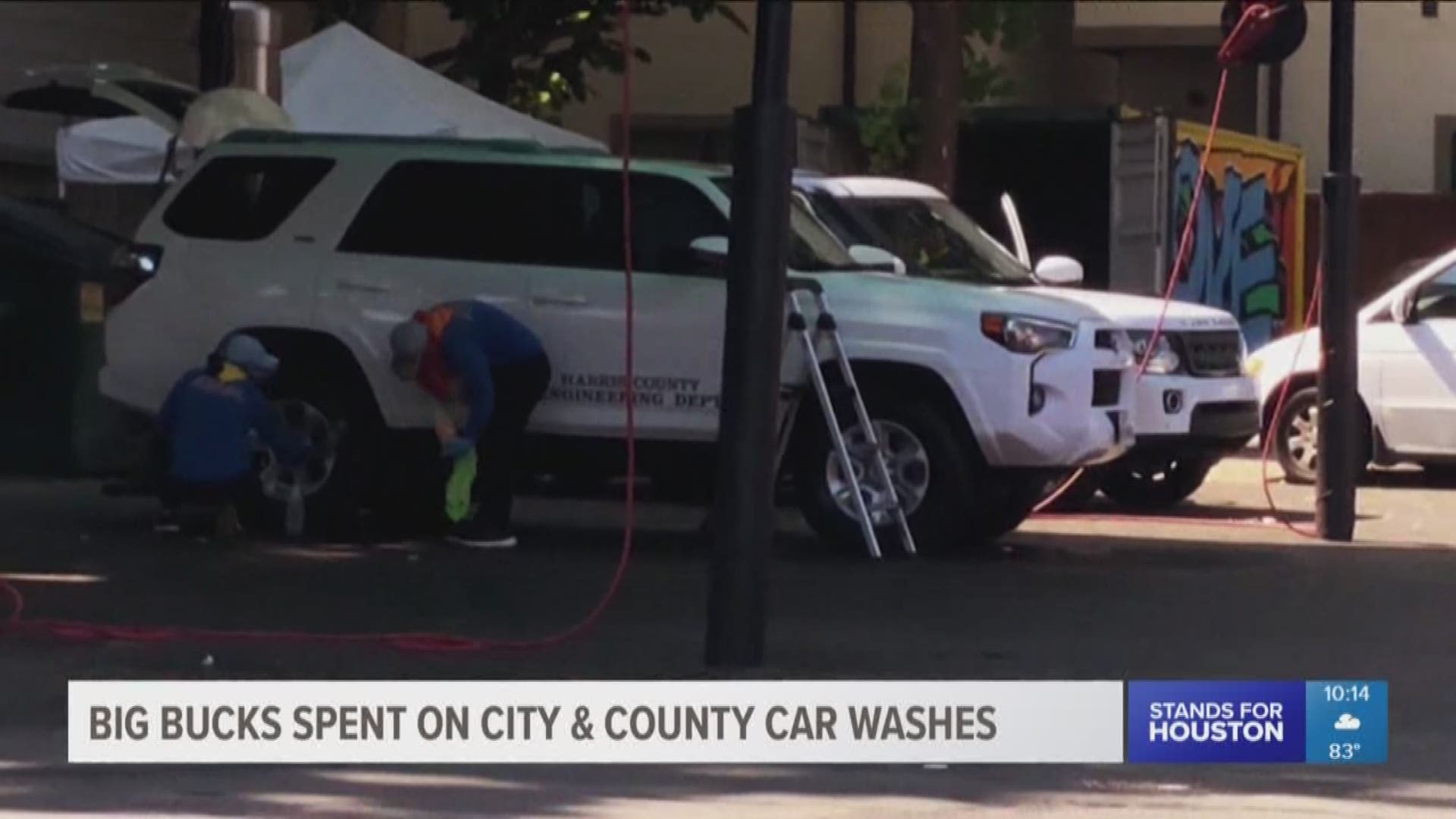 How much do you pay to get your car washed?

You probably don’t spend $100, $200 or more. But KHOU 11 Investigates discovered that’s what it costs to keep some local government vehicles clean.

Some taxpayers aren’t happy about it. Especially those at Joe’s Car Wash in Montrose, where patrons wash their own vehicles to save a few bucks.

“It’s cheaper than down the street where they detail your car,” said Joe Bass.

Down the street from Joe’s is where tax dollars are going to wash some Harris County vehicles by hand. The price tag? Anywhere from $40 to more than $80, according to receipts we reviewed.

“For one wash? Way too much,” said Jimmy Nicola.

“I’m sorry, that’s ridiculous to me,” added David Palma with a hearty laugh.

Credit: KHOU
Records obtained by KHOU 11 Investigates show that the city of Houston's Fleet Management Division charges $90 per hour to wash airport vehicles, with some washes costing more than $300.

Records show it’s the add-ons that really add up. Vehicle washes at the Harris County Engineering Department often include extras like interior protectant, buffing, shampoo, even a so-called “super clean,” which costs $50.

He said engineering vehicles don’t always receive a pricey $40 or more wash and that Harris County has a contract for a drive-through car wash that costs around $5 per vehicle.

But Stuckey said engineering vehicles are often on dusty and muddy job sites and require a more thorough cleaning than other county department vehicles.

“The grime, the tree sap, things like that, we want to make sure that we get that off at least once a year and get a more deep clean inside that vehicle,” Stuckey said.

But that explanation doesn’t hold water with some taxpayers back at Joe’s Car Wash, who said it’s money down the drain.

“You know in an age where we’re all having to tighten our belt a little bit, I’m appalled,” Joe Bass said.

We also checked how the city of Houston washes its fleet. At the Houston Airport System, car wash spending really takes off. Records show the city’s Fleet Management Division charges $90 per hour to wash airport vehicles.

Fleet Management often takes its time. According to the data, there were washes for cars, trucks and SUVs costing more than $300.

“I relate that people on the streets wouldn’t pay $130 to get their car washed,” said city of Houston Controller Chris Brown.

Brown is the city’s taxpayer watchdog. After KHOU 11 Investigates brought the spending to his attention, he said his office is launching a review to see what can be changed.

“These are public funds and we want to make sure they’re used efficiently,” Brown said. “Hopefully what will come of this is we’ll look down at the agreement and we’ll negotiate a better deal for the taxpayers in the future.”

Houston Airport System Director Mario Diaz had no comment about the $300 car washes and instead referred questions to the Fleet Management Division. That agency’s director, Victor Ayres, provided the following statement:

“The Fleet Management Department is responsible for the maintenance of vehicles and equipment utilized by departments in their operations. Inclusive in these services for the Department of Aviation are cleaning and washing of vehicles. The Fleet Management Department strives to continuously improve its service levels and find cost efficiencies in its operations. Concerns raised about the inclusive costs of vehicle washing for the Aviation Department will be reviewed to identify ways to streamline and reduce costs.”