Opening statements conclude, witness testimony begins in death of Ahmaud Arbery trial, here's what you need to know about what occurred Friday 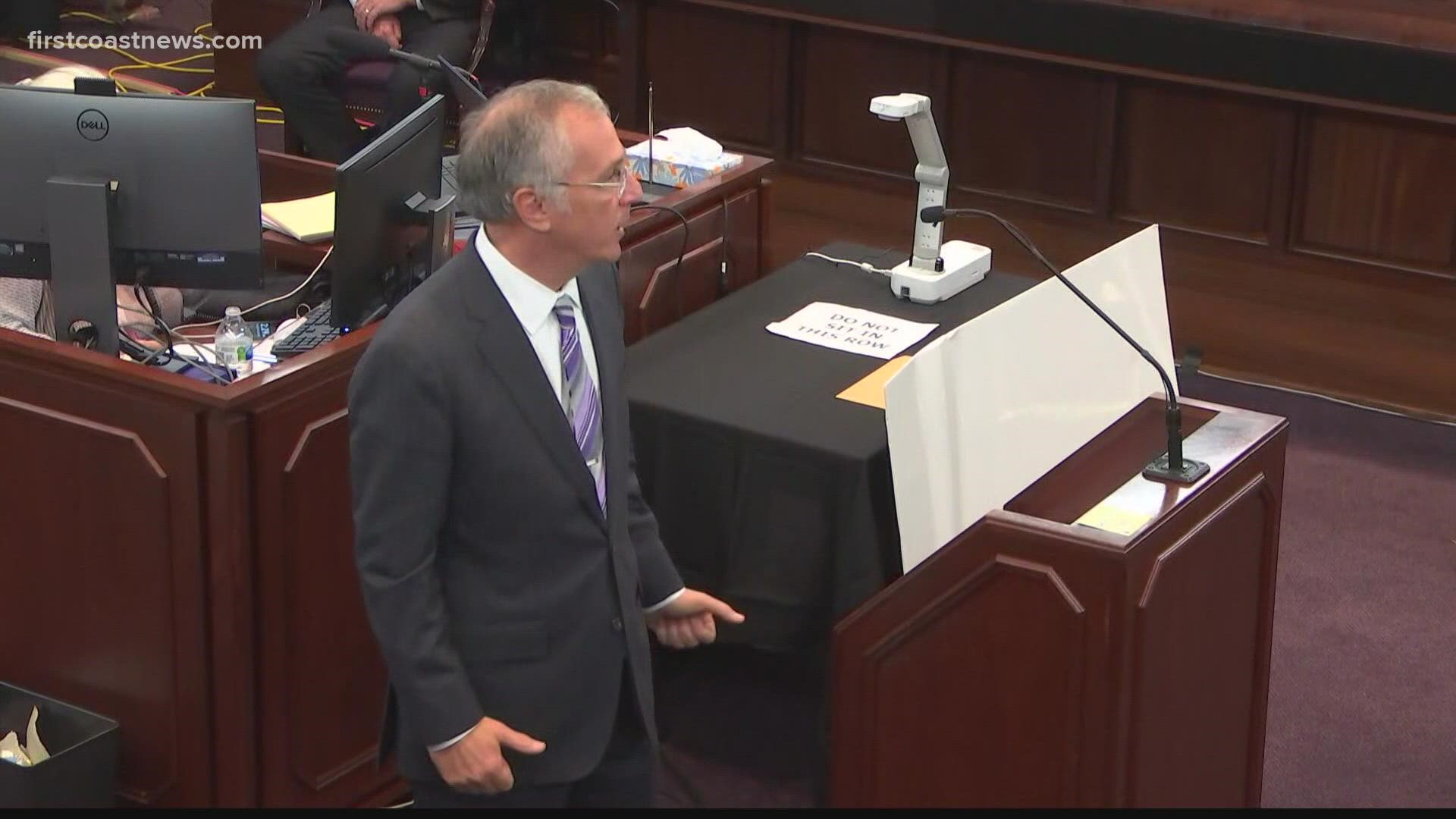 BRUNSWICK, Ga. — **WARNING: Videos contained in this article may be disturbing to some.

The trial in the death of Ahmaud Arbery started Friday morning in Brunswick after almost three weeks of jury selection.

A jury was chosen Wednesday, but not without controversy. Eleven of the 12 jurors are white, and just one member is Black. That's 92 percent of the jury, far more than the population of Glynn County, which is 62 percent white and 26 percent Black.

Arbery was shot and killed on Feb. 23, 2020. Cellphone video leaked to the public shows two armed white men in a truck approaching the 25-year-old Black man as he runs down the road. One of the men, later identified as Travis McMichael, and Arbery struggle over McMichael's shotgun before Arbery is shot and collapses.

Travis McMichael, his father Gregory McMichael and William "Roddy" Bryan, who recorded the video, are all charged with murder in Arbery's death.

5:26 p.m.: Officer William Duggan said he determined there was nothing he could do to resuscitate Ahmaud Arbery. Defense attorney notes Duggan described Travis McMichael in his report as "very upset"

5:12 p.m.: State prosecutors chose to start their case with bodycam footage from the 2nd officer on scene.

State prosecutors chose to start their case with body cam from the 2nd officer on scene. Unlike the 1st officer's, Duggan's doesn't show Travis McMichael distraught and pacing, his father reassuring him "you had no choice." #AhmaudArbery @FCN2go pic.twitter.com/OBLR6DZ4aD

3:55 p.m.: State called its first witness, GCPD Officer William Duggan, whose bodycam will be shown to jurors. Duggan was the second officer on the scene as Abery's body lay in the street. *See Duggan's raw bodycam footage below

Duggan was the second officer on the scene. He attempted to render aid to #AhmaudArbery, which the first officer did not. He describes Travis McMichael as "covered in blood. there was blood everywhere." @FCN2go

1:52 p.m.: Rubin said the video of the incident "doesn't even begin to tell the story," says it began months before in 2019 when Arbery is seen on camera in English's home under construction. Rubin shows jury stills from surveillance videos

1:50 p.m.: Rubin describes Travis as single, with a young son, formerly in Coast Guard, said he lived with his mother, father, sister and son at the time. Describes Satilla Shores as "quiet, scenic, middle-class neighborhood" said it was a neighborhood on edge due to property crimes 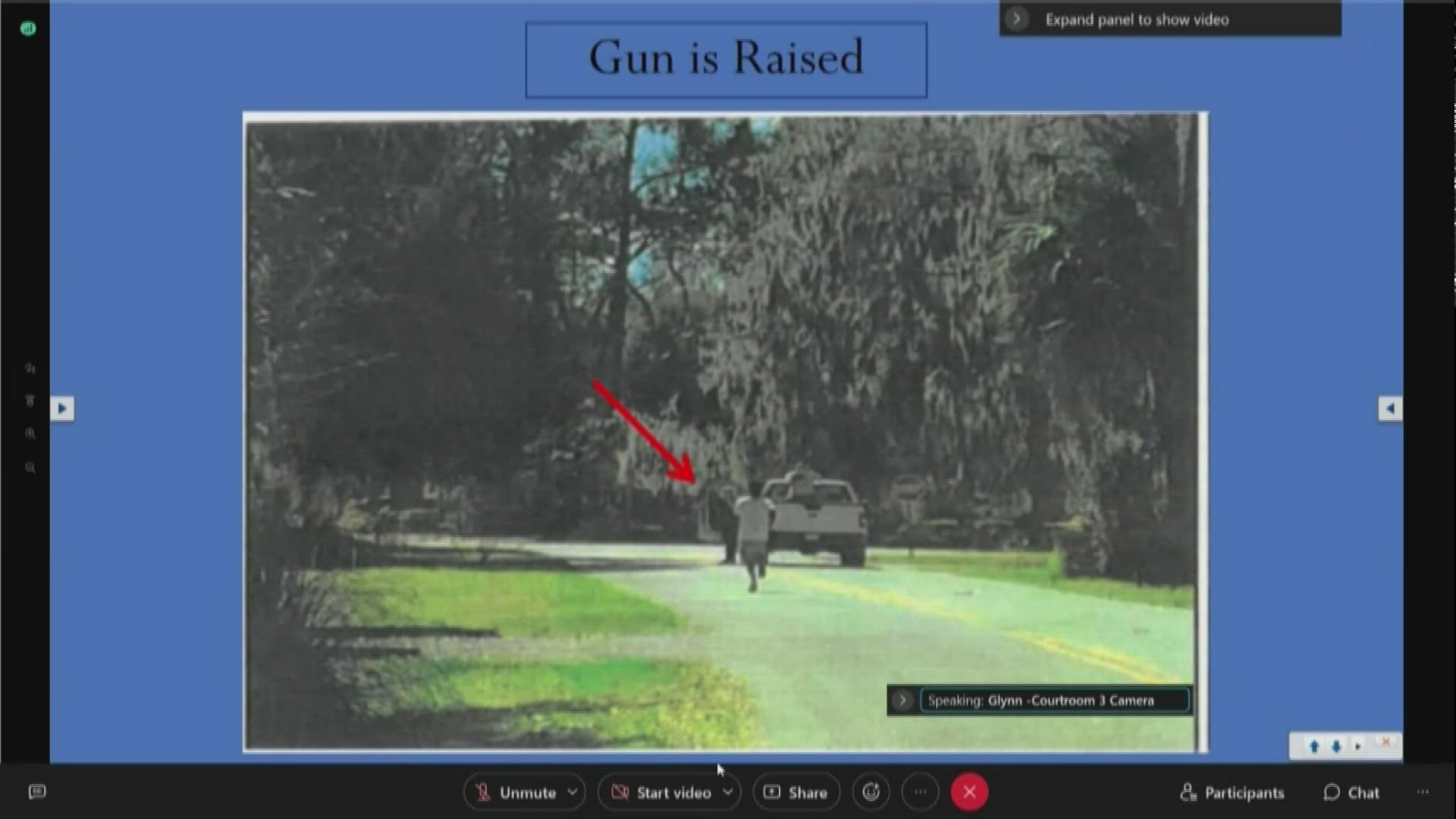 1:24 p.m: Technical issues with the audio of the court.

12:12 p.m.: Since those issues took so long, judge breaking for lunch now before hearing Travis' attorneys opening statement. Back at 1:10.

12 p.m.: Judge does not grant mistrial

11:57 a.m. Defense attorney Laura Hogue complains that Prosecutor Dunikoski raised the issue that the “investigation stalled.” She says the issue of the time-lapse between killing and arrest is a problem for the defendants.

Gough wants to “go ahead and move for a mistrial.”

11:46 a.m.: Back from break. Travis McMichael's attorneys said their opening statements will take 45 min. Then, judge says, will break for lunch.

11:14 a.m.: "Ahmaud Arbery had nothing on him," says prosecutor. "No backpack. No bag. No cellphone. No ID, no wallet, no keys, no gun, no weapon. Mr. Arbery couldn’t have called for help even if he wanted to."

10:57 a.m.: Wanda Cooper Jones cries out as the cell phone video plays, is weeping quietly in the back of the courtroom

10:53 a.m.: (VIA POOL) Marcus Arbery leaves the courtroom and mumbles "I don't want to see this." He walked out of the courtroom. Wanda Cooper-Jones is still seated in the with her attorney.

When state says Bryan "pulled out to try to hit him [Arbery] and ran him into a ditch," Arbery's mother groans quietly, @schindy reports

Bryan’s statement to Glynn County Police, state says. “I didn’t hit him, wish I would have, might have took him out and not got him shot.” pic.twitter.com/R3fHaPsUEz

Pool: one juror, older white man, seen with head down, leaned over and one female juror looks down as video of shooting plays. Travis McMichael's mom (Greg's wife) shakes her head slightly while watching video @FCN2go

From pool: As Dunikoski prepares to show video of Ahmaud Arbery's killing, Marcus Arbery leaves the courtroom and mumbles "I don't want to see this." He walked out of the courtroom. Wanda Cooper-Jones is still seated in the with her attorney.

WATCH: Video shows moments before Ahmaud Arbery was gunned down in Georgia

10:42: State says Gregory McMichael “driveway decision number one” deciding to run inside get his gun and Travis after seeing Arbery running down street. State says Greg didn’t know he was inside the home that day when he and Travis got into truck to follow him

10:41 a.m.: State shows video of William Roddie Bryan jump into his truck to join the chase of Ahmaud Arbery.

10:36 a.m.: Prosecutor says Greg McMichael assumed the worst with no immediate knowledge. He told police, “I thought, you know, he’s running from somebody, he’s just done something, you know, he might have hurt somebody or whatever”

10: 04 a.m.: Prosecutor skips over the part where they usually tell jurors what happened. Jumps right into: this is the house under construction, this is the home in relation to the homicide location.

9:53 a.m.: State starts opening statement. Lead prosecutor Linda Dunikowski: "A wise person once said don't assume the worst in someone's intentions." Judge has said this a few times during jury selection. Dunikowski says defendants did assume worst and made decision based on assumptions.

Judge instructs jurors on Georgia's now-overturned Citizens' Arrest Law. Says: "if the offense is a felony and the offender is escaping or attempting to escape, a citizen may arrest on reasonable grounds of suspicion" @FCN2go #AhmaudArbery

9:37 a.m.: Jurors are sworn in and are being given instructions. Wanda-Cooper Jones and her attorney walked into the courtroom. Marcus Arbery also just walked in.

9:30 a.m.: Judge just swore in jury and read out all the charges against the three defendants. Explains that defendants have pleaded not guilty to charges.

9:25 a.m.: Judge says he will not allow the fact #AhmaudArbery was on probation to be introduced into evidence, but will allow photographs that show vanity plate on Travis McMichaels' truck which featured the Confederate flag

8:44 a.m.: Attorneys are discussing the shields between where the jury will sit – they resemble cubicle walls.

RELATED: Black jurors getting more scrutiny than White ones in death of Ahmaud Arbery trial

Late Thursday, the judge struck one juror for medical reasons and replaced her one of the four alternates, also a white woman. Three alternates are left.

The state said while Travis McMichael is a former Coast Guard Officer, he wasn't an acting law enforcement officer when the shooting happened. The state also said it is contradictory to the defense's main argument of self-defense and citizen's arrest.

The judge will also allow some body camera footage that the defense said was too graphic. Prosecutors argued the video is necessary because it shows what happens when someone shoots another person. Prosecutors also said they don't want to hide anything from the jurors.

The judge went on to say if people in the gallery think they may have an outburst in reaction to evidence that will disrupt the court, to leave while it's presented.