Deaf HPD horse inspiration to others with disabilities

He's a registered American Paint horse with his own Facebook page, his own business cards in a dispenser on the wall outside his Houston Police Department stall, and now his own book. 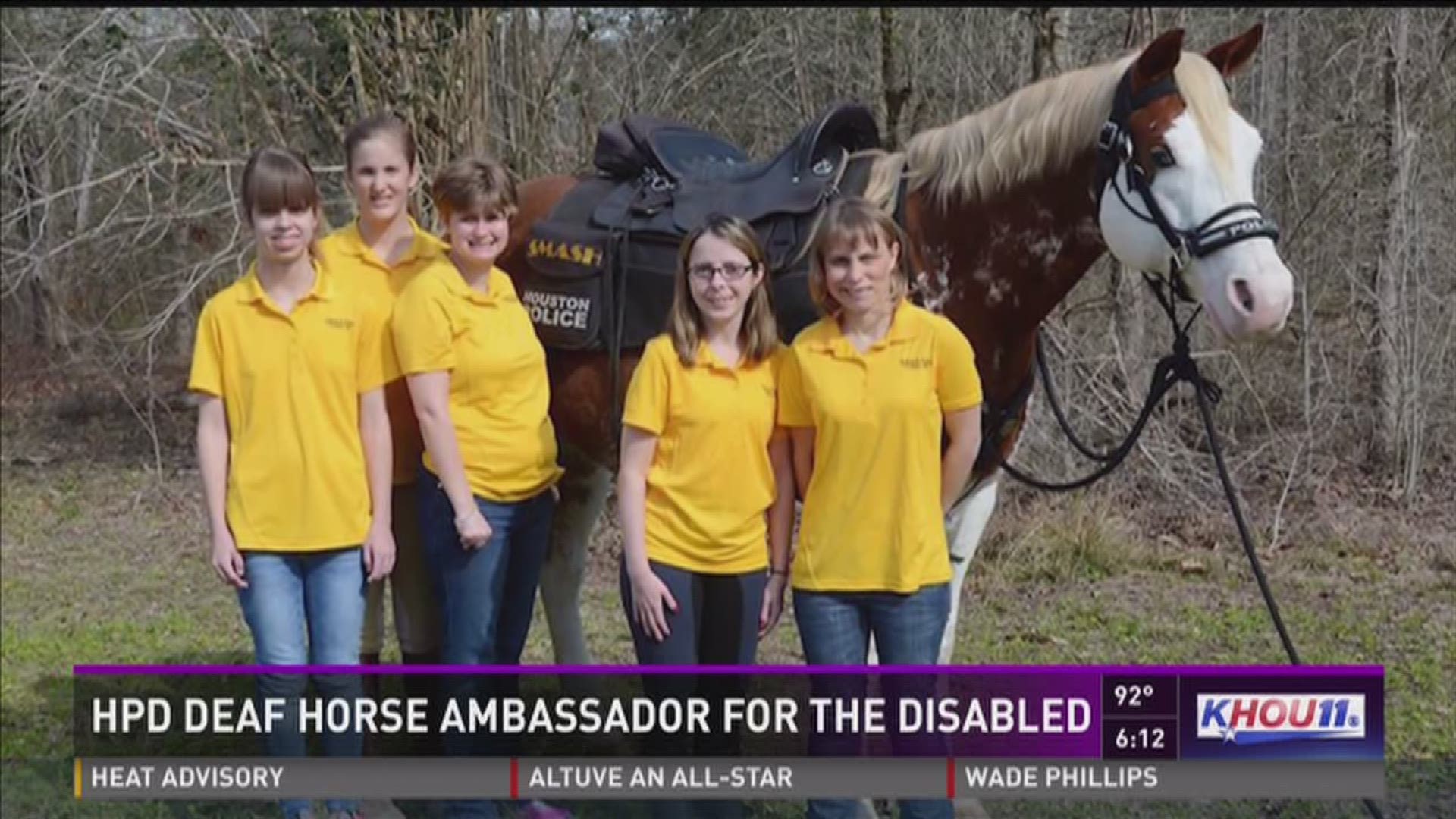 He’s a registered American Paint horse with his own Facebook page, his own business cards in a dispenser on the wall outside his Houston Police Department stall, and now his own book.

All of it because of his impact on a group of young women who saw not only a horse, but a kindred spirit.

His name is Smash.

His story began 11 years ago when he was a celebrated show horse. But he was born deaf. And when his offspring were born deaf, too, he was retired and donated to someone who could benefit from his calm demeanor: the Houston Police Department.

Now he is one of 36 horses and two mules who patrol public events and areas of downtown Houston, never startled by noises that might make other horses react or take flight. His disability made him perfect for the front lines of police mounted patrol.

"My buddy. My special buddy,” Katherine Richards said. "But he mainly plays with me, because I'm his best friend."

Richards, 26, was born with an intellectual disability. On a visit to the Houston Police Mounted Division stables, she saw Smash in his stall and asked why he didn’t have a sponsor sign.

Citizens and corporations are able to sponsor individual horses, at $5,000 a year, personally taking part in and helping fund their care. By now, there were five young women, all with intellectual disabilities, interested in becoming sponsors for Smash simply because of the paths they shared.

"We're just a special needs team, and we can do it together," Richards said. "Anything we can do is possible.”

Fast forward a few years, and the five Team Smash Girls -- Richards, Ashley Billard, Meg Norman, Christi Roberts and Hillary Kern -- raised more than $10,000 to sponsor Smash through bake sales and other fundraising events. Their names are now on a sign outside the horse’s stall at the police stables on Little York near Highway 59, and the young women are often at the stables taking care of their friend.

The latest development in this love story is that Smash and his best friends now have their own book. "Team Smash, Five Amazing Girls. One Amazing Horse" written by Houston-area author Artemis Greenleaf, tells Smash’s story, how Team Smash was born, and how a horse with a disability has helped a group of young women accept their own.

"They've never let their intellectual disabilities define them. Nor do they let anybody else define them, either,” said Kim Richards, Katherine’s mom. "Nothing, nothing holds you back."

"That you can overcome them and they won't hold you back. The only thing holding you back is you,” Sgt. Wills said.

Houston Police have an ambassador at work: a confident and calm presence on police front lines and a horse frequently visited by families at the Houston Police Mounted Patrol stables. A horse also with the best of friends.

A horse leading by example, overcoming his own disability, and showing others they can overcome theirs.

The book "Team Smash: Five Amazing Girls, One Amazing Horse" is available on Amazon and at Charlotte’s Saddlery off the Katy Freeway for $15. Some of the proceeds from the sale of the book also go to help pay for Smash’s care.