Our main concern in Southeast Texas is Laura - not Marco. We'll want to watch the forecast track closely today. 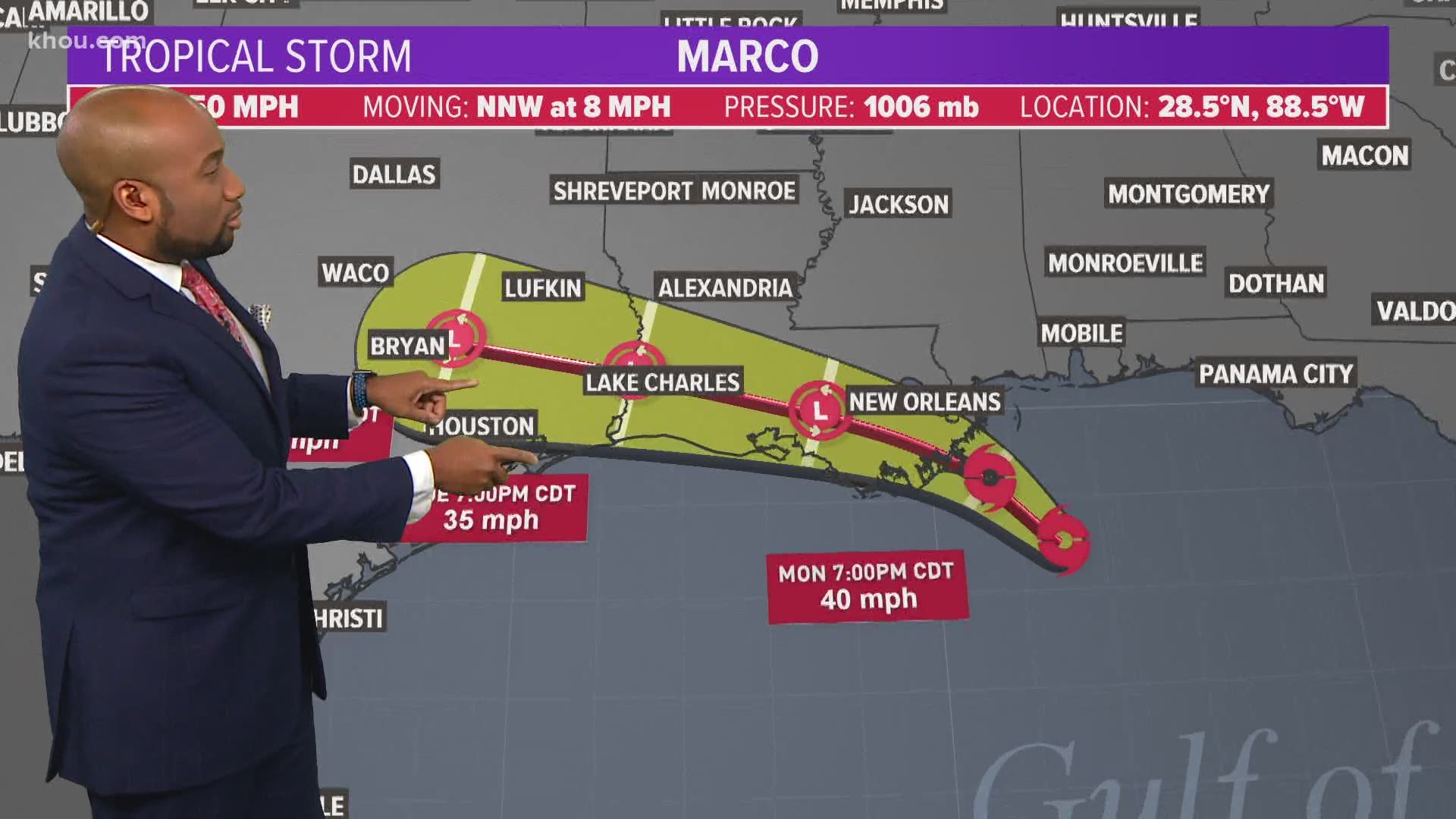 Overnight, the track of Tropical Storm Laura moved back slightly to the west, putting Houston in the cone of certainty. The center of the forecast cone is now in western Louisiana, but Houston is in the cone's far western edge. This storm has been very difficult to forecast, so it can easily shift and should be watched closely. It is still expected to pick up steam as it moves across the warm waters of the Gulf of Mexico on Tuesday.

Late Sunday, Tropical Storm Marco weakened to a tropical storm as it edged closer to the Louisiana coast. It had been a Category 1 hurricane, but the National Hurricane Center downgraded it. It's still expected to take a turn to the west and the Houston area remains in the cone, but by the time it reaches Texas it will start to dissipate and shouldn't bring significant impacts our way.

Below are updates on both of the storms.

Tropical Storm Laura - where is it going?

The National Hurricane Center's track for Laura, for now, has it making landfall in western Louisiana as a Category 2 hurricane Wednesday evening. The track has been centered near the Texas-Louisiana border, and the 4 a.m. Monday update put Houston back in the cone - but just barely.

KHOU 11 Meteorologist Chita Craft says until Laura clears Cuba later tonight, it will be difficult to predict the track, which is why we have seen it shift west and east a few times. Either way, there is an increasing risk of storm surge, rainfall, and wind impacts along portions of the U.S. Gulf coast by the middle of the week.

As of the 10 a.m. update Monday, Laura was moving west-northwest at 20 mph with winds at 60 mph. It is located 65 miles east-southeast of Cayo Largo.

Heavy rainfall is likely across Cuba and Jamaica today, causing life-threatening flash flooding and mudslides. Tropical storm conditions are expected in the Dry Tortugas and in the lower Florida Keys later today.

The long-range track remains uncertain. Intensity is the least predictable factor of tropical weather and Laura could be significantly stronger, even possibly a major hurricane in the Gulf of Mexico by early this week.

Marco weakens to tropical storm as it edges closer to Louisiana

Marco weakened to a tropical storm Sunday night as it faced wind shear and dry air in the central-northern Gulf of Mexico. Winds decreased to 70 mph, and it is forecast to stay a tropical storm as it skirts the Louisiana coastline on Monday.

It is still expected to bring storm surge and tropical storm force winds to Louisiana on Monday.

As of the 10 a.m. update, Marco had winds of 50 mph, down from 70 mph earlier in the morning. It is moving 8 mph north-northwest and is located 55 miles southeast of the mouth of the Mississippi River.

The center of the cone rides the Gulf coast all the way to the Houston area by Wednesday. By the time it makes it to Houston, however, it will have weakened greatly and should not be much of a threat to our area.

Gusty winds and heavy rainfall are expected along the Mississippi and Louisiana coasts today. Here's a timeline from our sister station, WWL, in New Orleans, of what people in Louisiana can expect as Marco moves in.

8 AM Tuesday - Winds ease, but still breezy. Cloudy with passing showers and downpours. Rain could be heavy at times.Storm surge falls gradually.

In a year that's seen everything from a global pandemic to murder hornets, now we have a possibility of not one but two hurricanes in Gulf waters at the same time.  Tropical Depression 13 was the first to become a named storm as Laura on Friday morning. Tropical Depression 14 became Tropical Storm Marco Friday night.  Could they merge in the Gulf?  It's possible. But not likely. Here's what to know about the Fujiwhara Effect.