As the flood waters recede, the damage piles up, and these streets once filled with water are now caked with dirt and debris. Doctors say there are hidden dangers to what's been left behind. 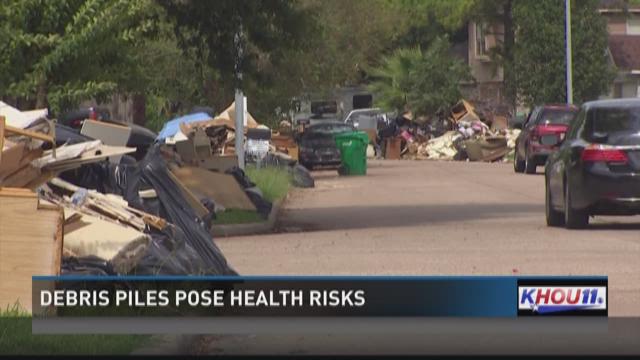 As residents work to clean out their flooded homes, they may not realize the risks that remain in their streets. Dirt and debris left behind from floodwaters may pose health hazards that many have not yet heard of.

“We’ve done some testing. Very little is known about the sediment," Dr. Winifred Hamilton with Baylor College of Medicine said.

Hamilton said they’ve pulled samples from both the flood water and the sediment left behind.

“Some had E. Coli which is an indicator of sewage, levels were very high in certain areas and less and some but we had them everywhere," Hamilton said.

They tested the samples, in which they found elevated levels of bacteria, mold spores and heavy metals.

“So arsenic, close to what is over the limit for playgrounds," Hamilton said.

But that’s just a few samples.

“So it can be very very different in different parts of the city," Hamilton said.

And those toxins not only washed through our streets, but our homes. We know to wear masks inside, but what about in your front yard.

“The big concern is the dust. So any sort of clean up like with a broom or something, you don’t want to get dust, you should be wearing respiratory protection if you’re cleaning sediment in your yard," Hamilton said.

“Those things can cause G.I. illness, skin infections, if there’s any kind of break in your skin, from moving things, there’s glass, there’s wooden pieces, moving objects," Dr. Duggal said.

Hamilton says don’t wear your shoes inside and constantly wash your hands. The key is common sense.