Winter storm timeline: Houston expected to get another round of sleet, freezing rain mid-week

An Arctic blast is moving through Texas and the Houston area could set record lows. And it's not warming up for days. 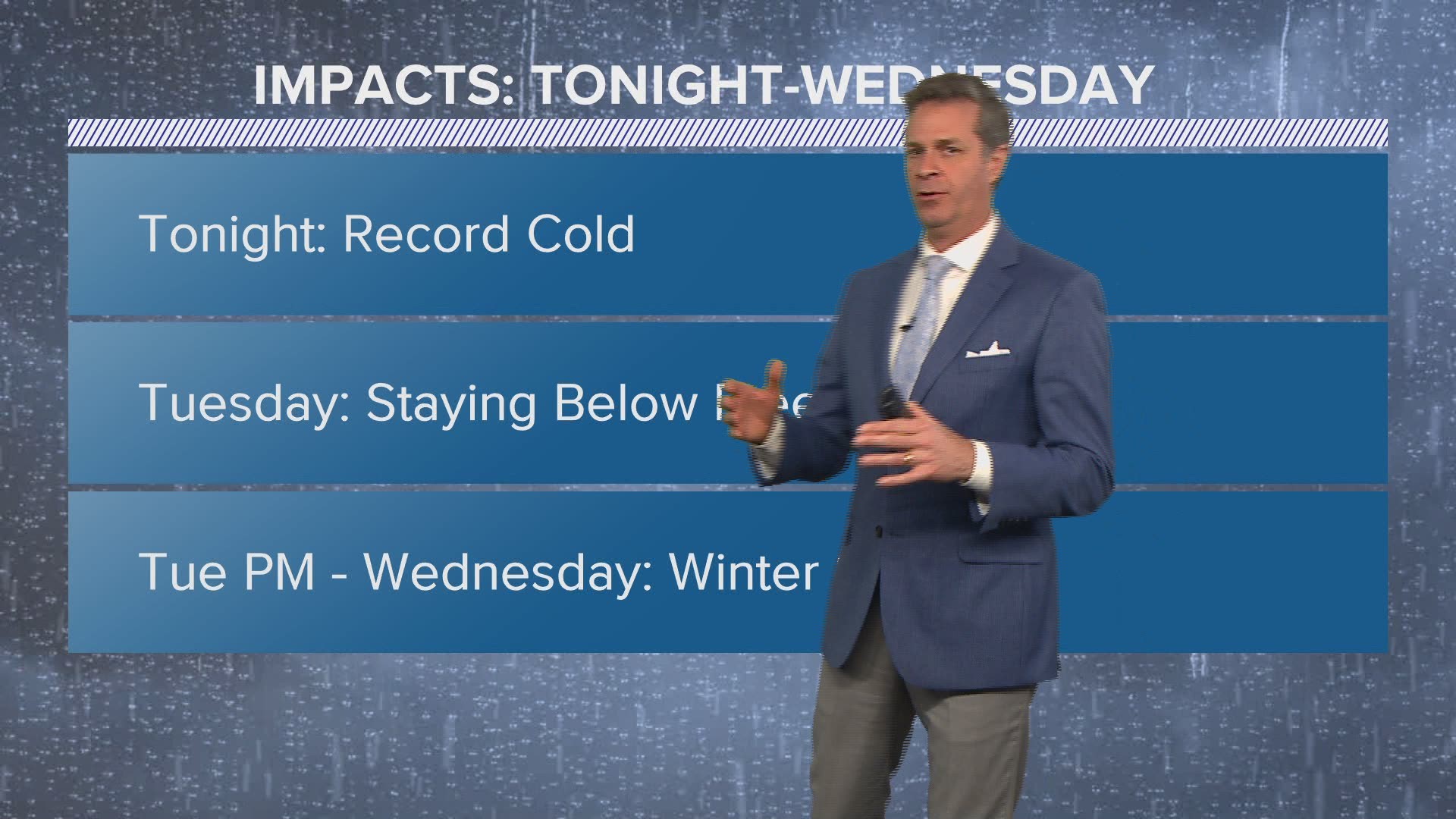 We are no longer updating this page. Tap or click here for the latest winter weather timeline

Starting at midnight Tuesday, there will be a new Winter Storm Warning issued for the northern and central areas of southeast Texas, including Houston.

The warning is expected to last through 6 a.m. Thursday.

#BREAKING: A **NEW** Winter Storm Warning has been issued for the northern and central areas of southeast Texas, including Houston, that begins Tuesday night for the onset of freezing rain and more ice. #KHOU11 pic.twitter.com/LddcdJ8Vvk

Several cities within the state are in for temperatures not seen for decades, and before it's over, there very well could be plenty of records set.

For the first time in history, all of southeast Texas was placed under a wind chill warning that started Sunday evening and is expected to last through Tuesday morning.

Scroll down for the day-by-day timeline.

RELATED: Schools closing or switching to remote learning due to threat of ice, sleet in Greater Houston Area

Monday Night: Partly cloudy to mostly clear. All-time record breaking cold possible. Low temperature in Houston between 5 and 8 degrees. Areas north of Houston could flirt with zero or even below zero temperatures. Wind chills drop to as low as -15 below zero. Extremely dangerous cold and wind chills by sunrise. Hypothermia and frost bite will be possible if outside too long. Roads will be impassible along with drifting snow.

Tuesday: Impossible travel conditions. Iced over bridges, freeways and side roads. Highs will struggle to reach the mid to upper 20s. Almost no snow or ice will melt so roads will remain iced over. Look for increasing clouds ahead of our next storm.

Tuesday Night: Not as cold. Mostly cloudy with a low in the mid 20s. Wind chills into the teens and low 20s.

Wednesday: Cloudy with a 90% chance of freezing rain, mainly north of I-10. Temperatures may briefly get above freezing but not long enough to cause much melting from Monday's ice and snow. Driving conditions will once again deteriorate. High: 35.

Wednesday Night: 90% chance of freezing rain, mainly north of I-10. Overnight lows into the mid 20s. Driving will once again be impossible, especially on bridges and overpasses.

Thursday: 30% chance of freezing rain and then clearing skies. Highs should reach the upper 30s with increasing sunshine.

Friday: Sunny. Highs make it into the 40s and then it's up, up and away from here. 70s by the coming weekend.

RELATED: 'Our infrastructure is not built for this' | Residents urged to stay home beginning Sunday due to Arctic blast

With winter weather on the way, Gov. Greg Abbott issued a disaster declaration for all 254 counties.

The Texas Department of Emergency Management is makin the following resources to be available.

How to protect yourself and your home

Where is there ice on the roads?

Houston Transtar is keeping track of icy conditions on roadways. You can see a list anytime here. And below is a live Houston-area traffic map.