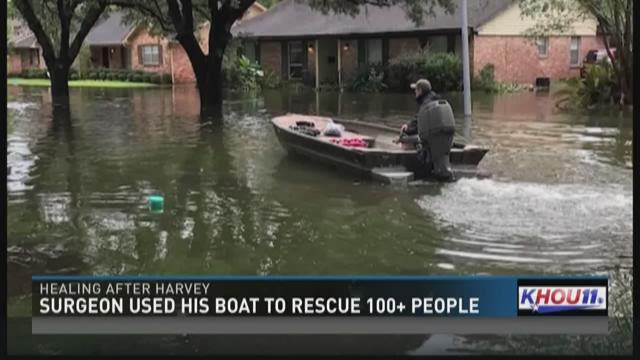 It wasn't just first responders, but everyday citizens who rescued hundreds of people during Harvey. One of them is a neurosurgeon at Memorial Hermann Southwest.

When the water started to rise in Meyerland, Dr. Joseph Cochran became a hero. He jumped in the one thing he had to rescue neighbors, his fishing boat.

"It was a little bit surreal. I've never seen anything like that," said Dr. Cochran with UT Health/ Memorial Hermann Mischer Neuroscience Institute.

From his own home, Dr. Cochran launched his boat.

"I had neighbors that were saying, our families are trapped here, so that's when I knew I should probably go help out," he said.

His day job is a neurosurgeon at Memorial Hermann Southwest, but to the more than 100 neighbors he rescued, he is a hero.

"I kept telling myself I'd make one more run, but when you see so many people calling out and need help, it's hard to stop," said Dr. Cochran.

However, mother nature ultimately stopped him.

"It was nightfall and it started raining really hard and you just couldn't see anything," he said.

His boat hit a fire hydrant and a fisherman came to his rescue. Cochran says boating through the streets of his neighborhood, he's never been more proud to call this home.

"I'm pretty proud to be living in Houston, a place that can really deal with something like this and do such a nice job, everybody helping each other out," said Dr. Cochran.

Amazingly, he made it back to the hospital that night to see patients and he was back in the operating room the next day.

Neurosurgeon rescues more than 100 of his neighbors during Harvey. At 10 how he ended up being rescued too @memorialhermann #KHOU11 #HouNews pic.twitter.com/Kcw7V5Jtmz