A high school teacher, a food truck owner, a political candidate, a DJ and a rapper - five different walks of life all coming together to be honored for one heroic act. 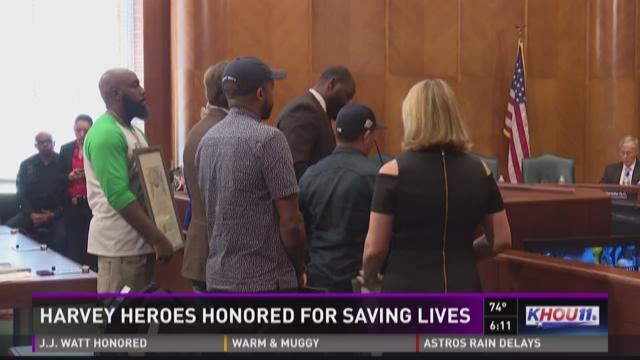 Six months after Harvey, we’re hearing new stories of heroic acts that saved hundreds of lives during the hurricane. On Tuesday, a few of those heroes were honored by City Council.

A high school teacher, a food truck owner, a political candidate, a DJ and a rapper -- five different walks of life all coming together to be honored for one heroic act.

She used the app Zello to help take and log 911 calls so first responders could locate their rescues.

“I don’t think I did anything that most people I know wouldn’t have done. I just happened to be in the right place at the right time," Hartman said.

Chef Saul Obregon fed hundreds from his food truck from victims to firefighters.

“They needed a warm meal, and we had the business and the portal to do it so without thinking twice, immediately on that Monday, we went and we hit the streets," Obregon said.

But some haven’t stopped helping after Harvey.

“Just trying really to play our part to keep it going, because some of these stories really are heartbreaking," Trae the Truth said.

"Just needing to provide that assistance for the families that we did, I would hope if I was in that situation, my neighbor would do that for me," DJ Mr. Rogers said.

From adopting homes to creating their own 48,000 square foot warehouse of supplies, the two have since created the "Relief Gang," a group dedicated only to helping Houston get back on its feet.

“You learn a lot in this process, and it grows and molds you into where you are now," Trae the Truth said.