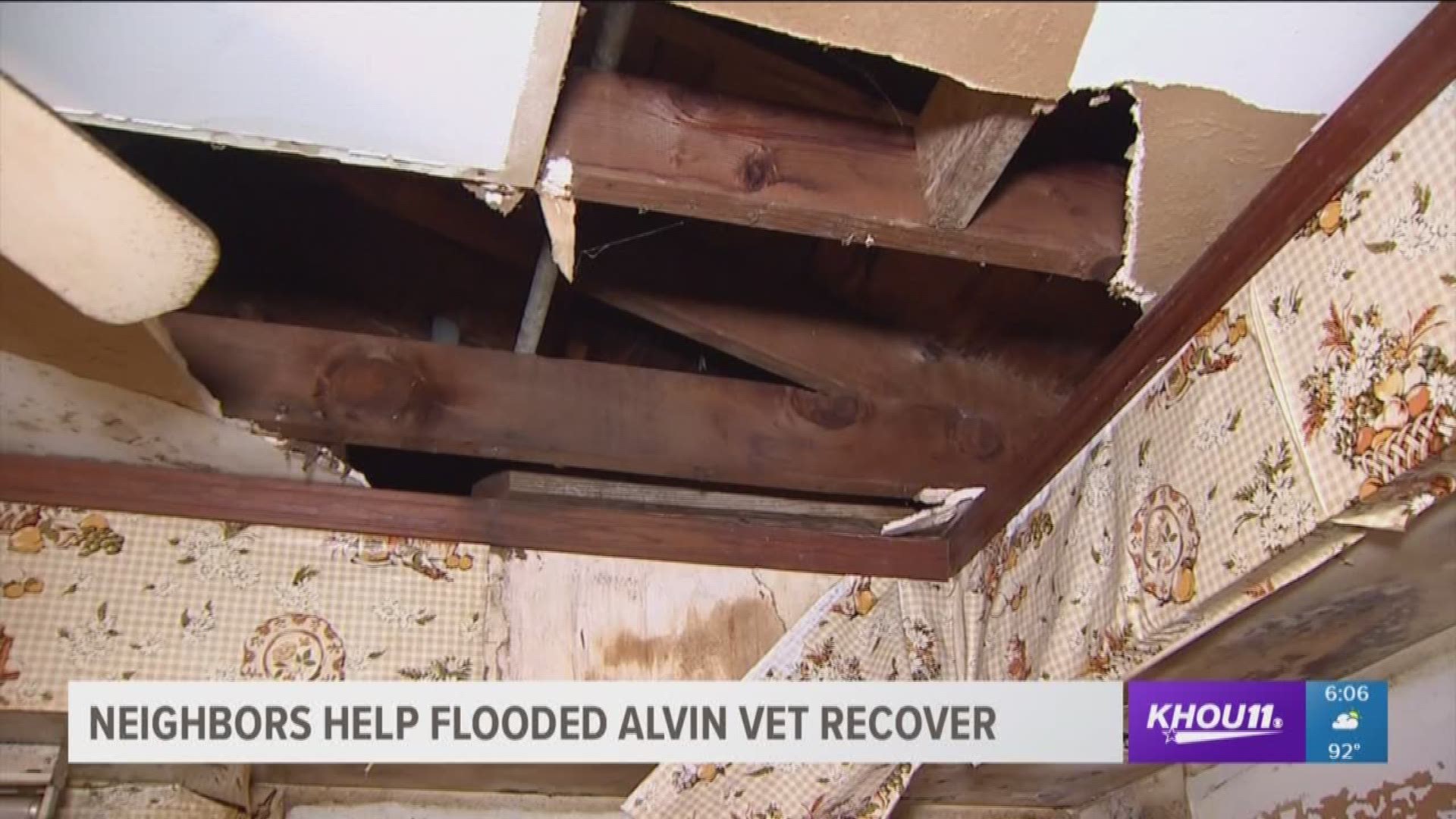 As we approach the one year anniversary of the historic flood, some good news for disabled veteran Elmer Branch who, for the last 11 months, thought he'd been forgotten after Harvey.

Branch, an elderly widower, lives along in his Snyder Street home. Based on the water line throughout Branch's home, it looks like his home, which neighbors Mustang Bayou, took in more than three feet of water. The water came and went, but everything in Branch's home stayed.

Nothing was removed or cleaned or disinfected. Furniture, flooring, the ceiling and his personal belongings were soaked in water, dried in his unventilated Alvin home and now covered in mold and mildew. 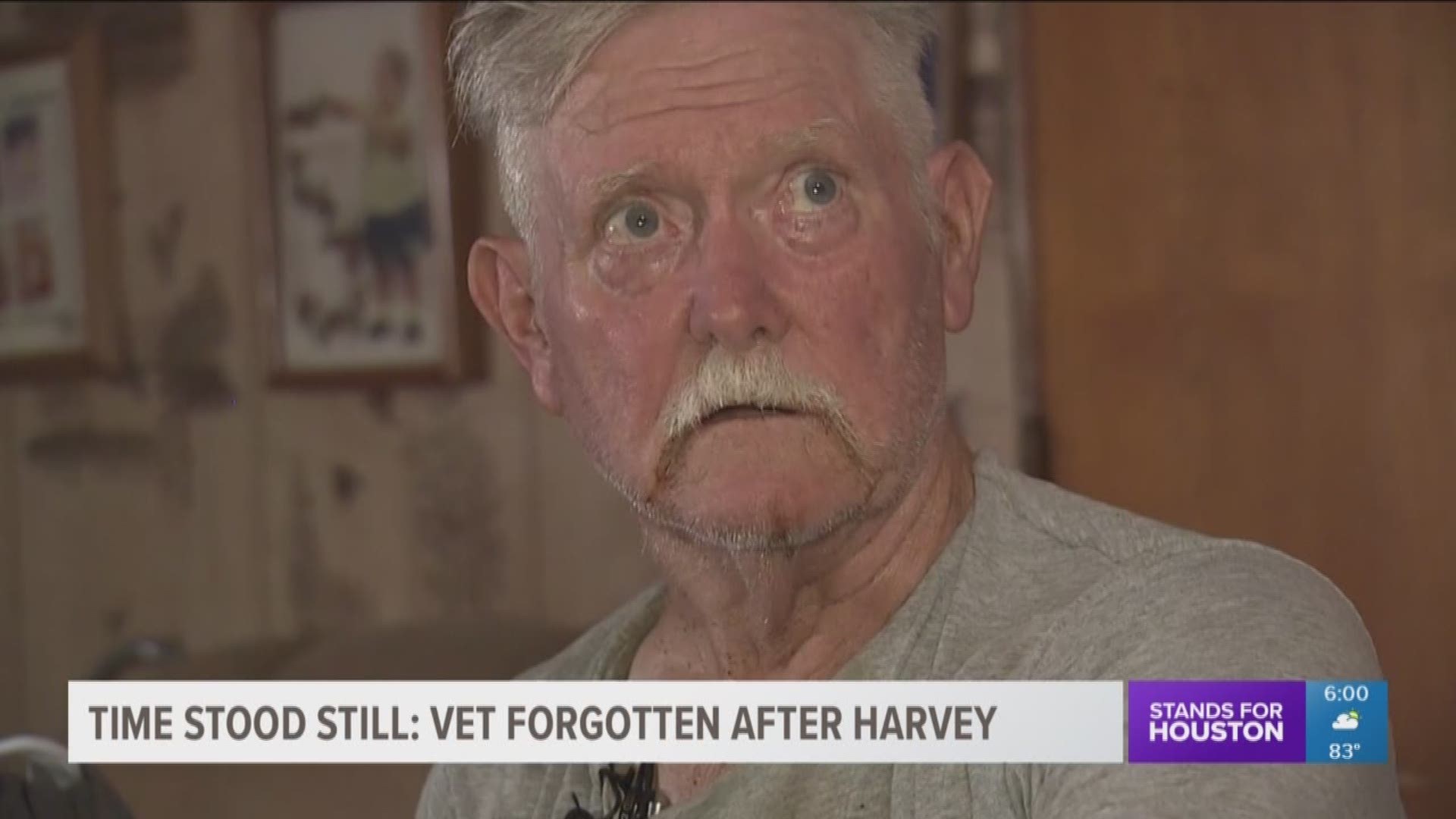 "It’s pretty pungent," said David Hollars of the smell inside Branch's home. "As soon as I walked through the door you can smell the mold."

Hollars, an AT&T technician, says he first met Branch a couple of weeks ago when Hollars was sent to Branch's Snyder Street home for a service call.

Hollars says after his work was done, he didn't feel comfortable leaving the 70-year old man alone in his home, which is overrun with rodents and cockroaches.

"You know, I’ve been into hundreds of Harvey-flooded homes, but this was, by far the worst home I’ve been in," said Hollars.

Hollars asked Branch if he could take some cellphone pictures of Branch and his home and share them with friends. Branch agreed.

Within days donations and help started to trickle in. Enough money was donated to cover a hotel stay for Branch and his chihuahuas.

And in the days that followed, Hollars learned Branch's wife passed away in January and Branch's son died in 2017. Branch, who served in the U.S. Army from 1966-1968, says his applications for financial assistance were denied after Harvey.

This is #Houston at its best! From the @ATT service tech who stepped in to help his elderly neighbor, to @AHS_MCJROTC volunteering and @TeamRubicon stepping in to help a fellow veteran in need! #WereWithYouElmer #Harvey #HoustonStrong #StandingForHouston #khou11 pic.twitter.com/xypRp7GEWB

"He’s basically our family, because we’re all from the same place, so let’s go help him out," said JROTC member Aaryana McKenzie.

Teams of volunteers are pulling everything from Branch's home. His belongings are either being disinfected and packed away, or tossed.

"Elmer, I know he wants to salvage his home, so that’s what we’re going to try to do," said Hollars.

Team Rubicon will work with a remediation company to remove all of the mold from the property. Construction crews will then figure out if the bones of the home can be salvaged, or if the decades old home needs to be demolished.

Branch, seated in a wheelchair under a shade tree, said his prayers have been answered. "You’re doing a good job. Keep it up," said Branch to the volunteers who moved in and out of his home.

#StandingForHouston a year after #Harvey. @MarcelinoKHOU 1st told you about 71YO Elmer Branch. The #Alvin man had been living in mold, debris since his home flooded. His neighbors stepped up... today, they’re beginning work to rebuild his home! #DayMade #HeartMelting #khou11 pic.twitter.com/51g7S1ze8n