The Hubble Space Telescope is responsible for many iconic images of space; check out some of its amazing photos.

A one-of-a-kind observatory has been peering into the depths of space for three decades, capturing breathtaking images of galaxies billions of light years from Earth and has helped scientists understand the workings of the universe.

The Hubble Space Telescope (HST) is one of the most well-known telescopes in the world and is responsible for iconic images of space featured in textbooks and publications around the globe.

"First conceived in the 1940s and initially called the Large Space Telescope, the Hubble Space Telescope took decades of planning and research before it launched on April 24, 1990," NASA said.

The world-famous telescope is named after Edwin Hubble, an American astronomer who studied galaxies and made major contributions to the field of astronomy in the first half of the 20th century.

The launch of the HST faced several setbacks, including delays due to costs and a pause in the Space Shuttle Program following the Challenger disaster on Jan. 28, 1986.

However, the setbacks didn't end after Hubble was launched into orbit.

"When Hubble began returning science data to Earth, astronomers did not see crisp, point-like images of stars," NASA reported. "Instead, they saw stars surrounded by large, fuzzy halos of light."

These blurry images were the result of an almost imperceptible error in the telescope's primary mirror. The mirror was "too flat" by 2.2 microns, or roughly one-fiftieth the thickness of a human hair. This minute error caused all of the images to be out of focus.

In December of 1993, more than 3 years after Hubble was launched, Space Shuttle Endeavor carried a team of astronauts to the telescope where they performed a series of spacewalks to correct its blurry vision.

"Replacing the mirror was not practical, so the best solution was to build replacement instruments that fixed the flaw much the same way a pair of glasses correct the vision of a near-sighted person," NASA explained.

The repairs worked, allowing astronomers to peer into the depths of space with clarity like never before. Four additional service missions have extended the life of the HST well beyond the intended 15-year mission. At 30 years old, the telescope is still operational and could remain functional into the 2030s.

Credit: AP
This image made by the NASA/ESA Hubble Space Telescope shows the tip of the three-light-year-long pillar in a stellar nursery called the Carina Nebula, located 7500 light-years away from the Earth. Composed of gas and dust, the structure is illuminated by light from hot, massive stars off the top of the image. The Hubble Space Telescope marks its 25th anniversary. A full decade in the making, Hubble rocketed into orbit on April 24, 1990, aboard space shuttle Discovery. (NASA/ESA/Hubble SM4 ERO Team via AP)

Over its 30-year mission, Hubble has contributed to a plethora of discoveries, ranging from the detection of monster black holes to photographing the birth of stars. Some of these breakthroughs have changed the way that astronomers understand the universe.

"Before Hubble was launched," NASA reported, "...calculations of the universe's age ranged from 10 billion to 20 billion years. Now, astronomers using Hubble have refined their estimates of the universe's present expansion rate and are working to make it more accurate."

1 / 12
AP
This May 13, 2009 photo made available by NASA shows the Hubble Space Telescope from the space shuttle Atlantis, orbiting the Earth.

Through these precise observations, the age of the universe has been calculated to be around 13.8 billion years.

Images taken by the HST have shed light on dark matter, a type of matter that makes up a majority of the universe, but that humans cannot see. Although it cannot be observed directly, it can still be detected through its gravity.

"Hubble's uniquely sharp vision allows astronomers to map the distribution of dark matter in space using gravitational lensing," NASA explained. "Mathematical models of these results shed light on the location and properties of the lensing material, both visible and invisible (dark)."

Credit: AP
This image made by the NASA/ESA Hubble Space Telescope shows NGC 6543, the Cat's Eye Nebula. The Hubble Space Telescope, one of NASA'S crowning glories, marks its 25th anniversary on Friday, April 24, 2015. With more than 1 million observations, including those of the farthest and oldest galaxies ever beholden by humanity, no man-made satellite has touched as many minds or hearts as Hubble. (NASA, ESA, HEIC, Hubble Heritage Team (STScI/AURA) via AP)

"Astronomers used Hubble to make the first measurements of the atmospheric composition of extrasolar planets," NASA said. "Hubble also captured what might be the first visible-light images of an extrasolar planet. The imaged planet circles the star Fomalhaut, located 25 light-years away."

Closer to home, Hubble has helped scientists better understand some of our closest celestial neighbors. In 1994, the HST chronicled Comet Shoemaker-Levy 9 slamming into Jupiter, the first documented case of a comet hitting a planet.

"Hubble also made the first images of bright auroras at the northern and southern poles of Saturn and Jupiter," NASA said.

Hubble continues to relay data to NASA scientists, but its successor is nearing completion. The James Webb Telescope (JWT) is scheduled to launch in 2021 and will take the next step forward in deep space exploration.

"Webb will be the largest, most powerful and complex space telescope ever built and launched into space," NASA said. "It will fundamentally alter our understanding of the universe." 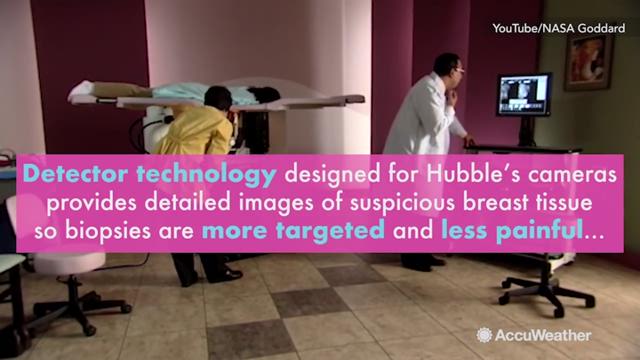