TxDOT survey asks residents about future of I-45 expansion project

The North Houston Highway Improvement Project would shift the flow of traffic around downtown to make it safer and improve traffic congestion. 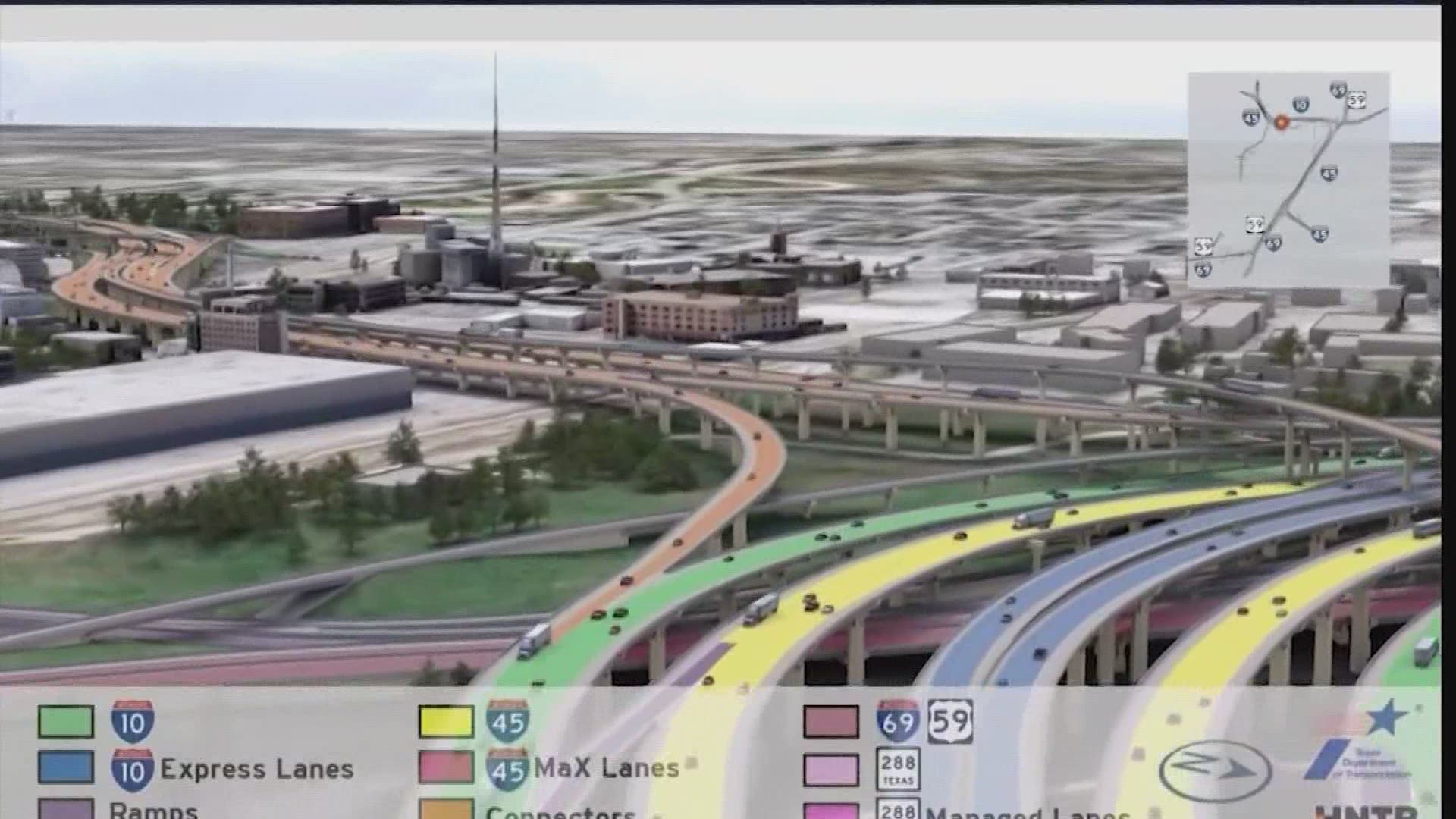 HOUSTON — The Texas Department of Transportation wants to hear from you on a $7 billion project that would reshape I-45 traffic around downtown Houston.

The Federal Highway Administration put the North Houston Highway Improvement Project on hold earlier this year after Harris County filed a lawsuit demanding TxDOT take residents and the environment into consideration as part of the expansion plans.

Now, a new survey is asking residents if they support the project.

However, some local residents like Neal Ehardt said this survey doesn’t do enough to address the problem.

He said they want better options than what’s been proposed.

Ehardt said TxDOT has failed to look at other alternatives.

A new report recently found this stretch of highway is the most dangerous in the country.

TxDOT said they’ve spent more than a decade working on the project that would shift the flow of traffic around downtown to make it safer and improve traffic congestion and commute times.

The survey asks residents if they support keeping the project and funding as proposed OR support removing it.

“We need to be doing more detailed surveys and presenting different alternatives to the community and asking them to pick between them," Ehardt said.

In a statement, TxDOT said:

"The NHHIP is more than a decade in the making with extensive local input and regional support. It will bring much-needed and significant improvements to I-45 to enhance safety and mobility as our state continues to see robust population growth and freight traffic. The project will also replace aging infrastructure and help with flooding issues along the corridor while improving routes that could be used during an evacuation.

"Currently, TxDOT has suspended work on the project in response to the Federal Highway Administration (FHWA) requesting a 'pause' in project activities as it investigates Title VI complaints related to the development of the project. While TxDOT is confident in our due diligence and compliance with federal standards and regulations in the development of the NHHIP, we are committed to working with FHWA as it conducts its investigation. Furthermore, key local agencies and officials have now voiced opposition to the project as approved by the MPO and even initiated legal action to prevent TxDOT from moving ahead with this regionally approved project.

"The Unified Transportation Program (UTP) is a state planning and programming document to identify and approve defined projects to be prepared for construction. It is a critical tool in guiding transportation project development and deals with the selection of which projects to move forward at this time. Through the annual UTP public comment period, the Commission is now seeking public input on keeping the money allocated to this project in the 2022 UTP for planning purposes—as evaluated and approved by the Commission and the Houston-Galveston MPO—or not. This input will help inform the Commission's decisions when it considers the approval of the 2022 UTP, which is scheduled to take place at the August Commission meeting.

"Funds no longer allocated for NHHIP could be used elsewhere including outside the Houston area.

"As we do as part of our annual updates of the UTP, TxDOT is using many different tools to receive as much input as possible, from as many residents, organizations, and elected officials as possible. Adding additional options and ways to comment can only increase the opportunity for even more people—especially those who may not have otherwise commented—to voice their opinions. TxDOT believes that increasing the ways people can comment is a good thing, and that combining all input, from all sources, will certainly help the Commission have a more complete understanding of the feedback."

However, some residents Susan Graham with Stop TxDOT I45 said the department isn’t doing enough.

“The comments and the amount of attempted engagement with TxDOT would fill volumes of notebooks but they have not come to the table to actually be a serious partner with the city or the county,” Graham said.

She believes the current plan would displace people and businesses and won’t make the highway any safer.

“The speeds on this freeway will be escalated the way that they’re going to build it and the faster people drive we know the more accidents there are,” Graham said.

People have until Aug. 9 to fill out the survey.