Drivers will certainly want to avoid the area and use the 610 Loop as an alternate. 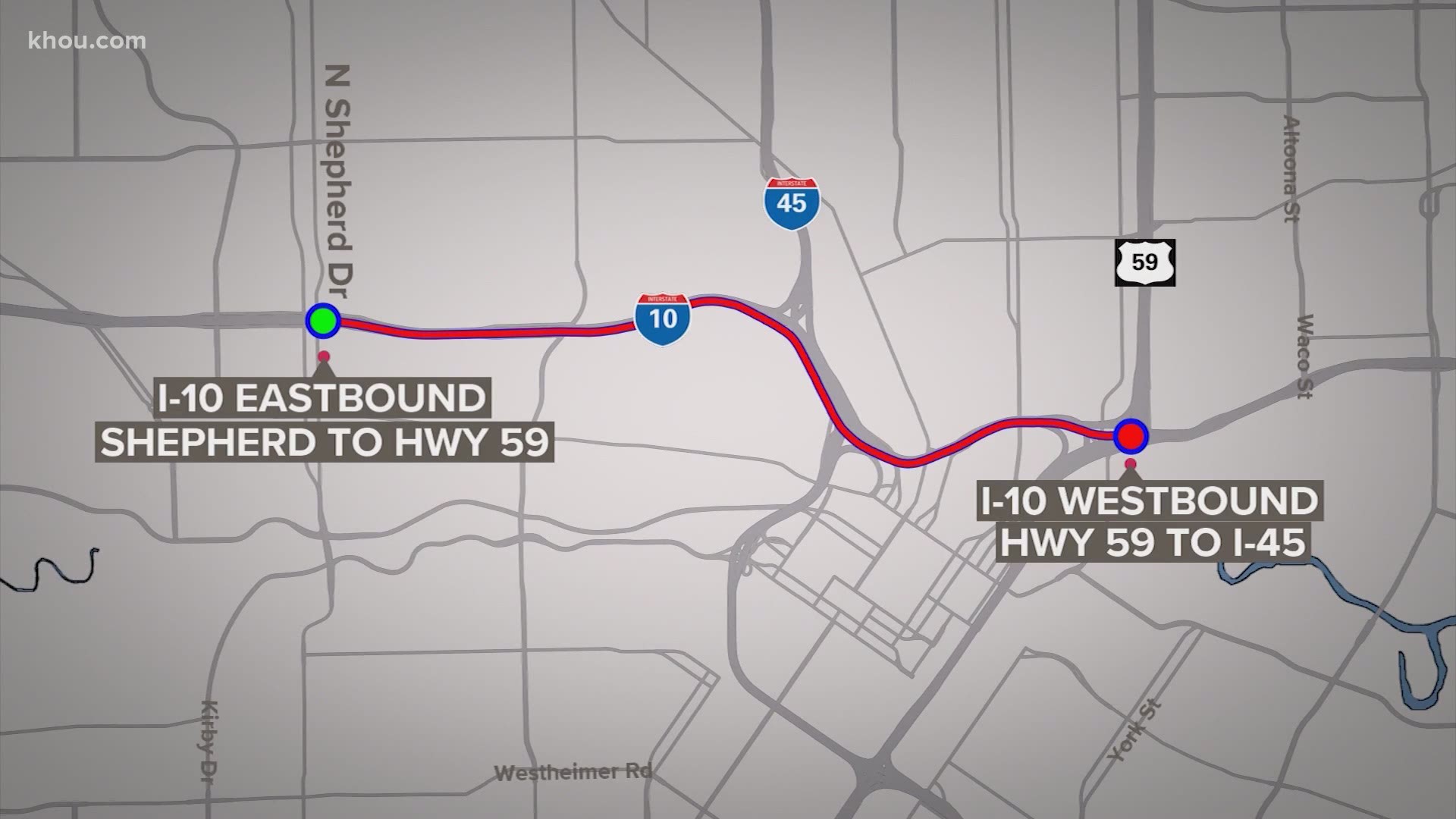 HOUSTON — Update: I-10 westbound at I-69 Eastex is now open. The Elysian Viaduct work was completed early. I-10 eastbound at Shepherd remains closed as work on the Houston Ave bridge continues.

The reconstruction of the Elysian Viaduct bridge over I-10 means we will have more lane closures this weekend, and this time it’s a big one: all mainlanes in both directions.

The closures are needed as well for repair work to the Houston Avenue Bridge over I-10, according to the Texas Department of Transportation.

Officials will close the I-10 eastbound and westbound mainlanes in the downtown Houston area starting Friday night, Oct.16. Eastbound drivers will want to use the 610 Loop as a detour because the closure is in effect for a couple miles. Westbound drivers can use I-45 to get around downtown and reconnect with I-10, but you should expect delays.

The eastbound lanes are not scheduled to reopen until 5 a.m. Monday. The westbound side should reopen by late Saturday afternoon.

Weekend I-10 closure details from TXDoT:

Starting Friday, October 16 at 8 p.m., crews will close the I-10 eastbound mainlanes between Shepherd Drive and I-69 until Monday, October 19 at 5 a.m. to make repairs to the Houston Avenue Bridge over I-10 and to continue work on the Elysian Viaduct bridge over I-10. Motorists are encouraged to utilize the I-610 West Loop as an alternate route to bypass the closure.

Also, starting Friday, October 16 at 8 p.m., crews will close the I-10 westbound mainlanes between I-69 and I-45 until Saturday, October 19 at 5 p.m. Crews will be pouring the concrete bridge deck over I-10 – a step that puts the entire Elysian Viaduct closer to completion. Motorists traveling westbound on I-10 East Freeway will be detoured to I-69 southbound to I-45 northbound to I-10 westbound.

There will be additional closures associated with the Elysian Viaduct project this weekend including multiple connector ramps as well as several entrance and exit ramps. These can be found at http://traffic.houstontranstar.org/construction/. Police officers will be onsite to assist with traffic control. It is strongly advised to seek an alternate route during this closure and #knowbeforeyougo before getting on the road this weekend.

The Elysian Viaduct Bridge project includes replacing and widening the bridge structure to accommodate paved shoulders and increase the structural integrity to current design standards. The project also calls for the adding of shoulders to the four-lane roadway and a wider sidewalk along the northbound lanes between Runnels and Ruiz streets. The project is anticipated to be completed by late 2020.

The Houston Avenue Bridge work is needed to make repairs to the bridge after multiple strikes by high-load vehicles. The bridge repairs will extend the life of the bridge until it is replaced as part of the North Houston Highway Improvement Project.

For additional scheduled lane closures related to this project go to www.houstontranstar.org. All closures are subject to change due to inclement weather. Follow us on Twitter @TxDOTHouston, Facebook at www.facebook.com/txdothouston and on Instagram at TxDOTHouston.