Jeff Bezos, his brother and two others took flight in West Texas. 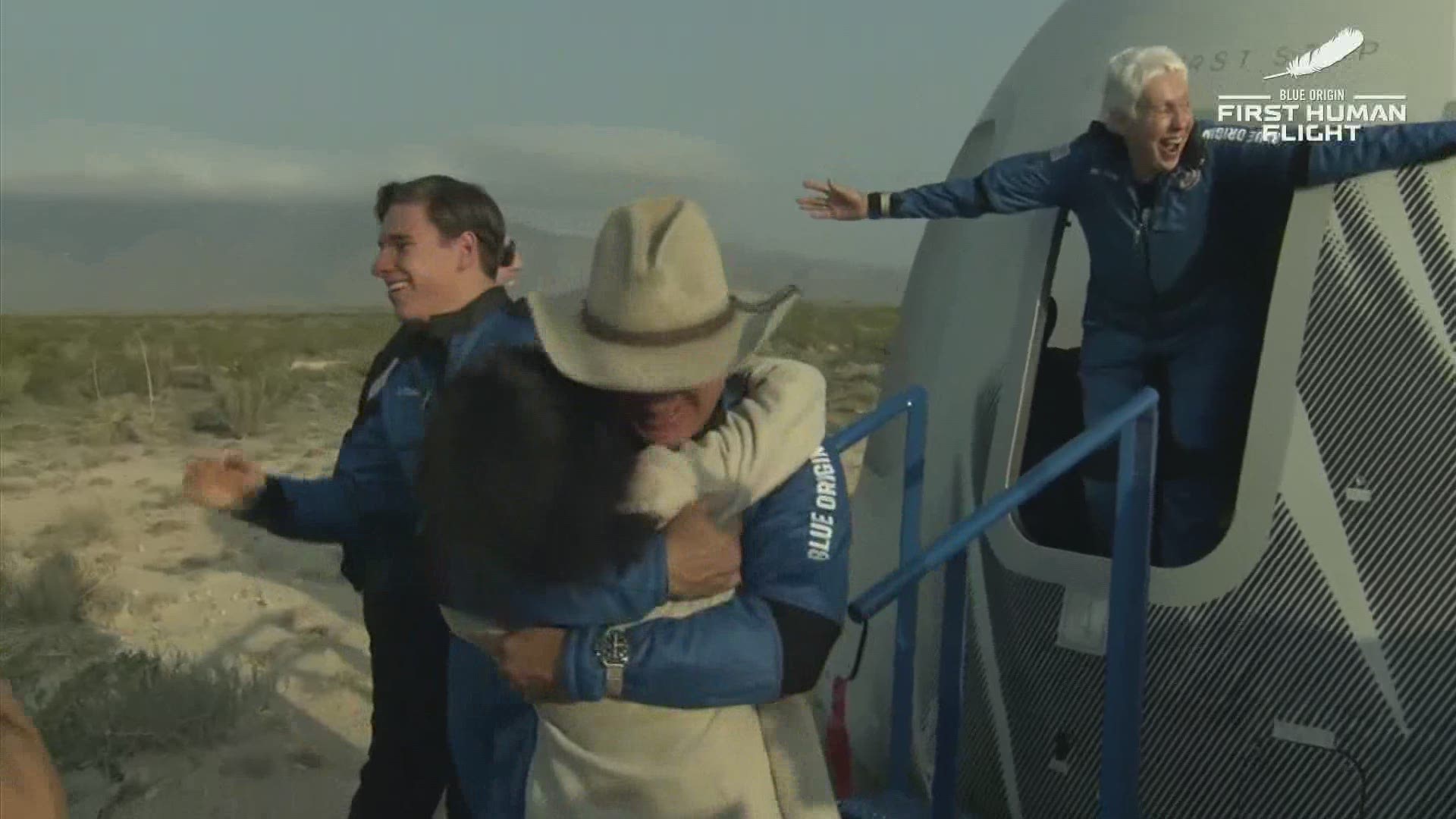 At age 82, Funk is now the oldest person to go into space and at 18, Daemen the youngest.

VIDEO: Did you miss today's launch and touchdown? You can re-watch it here

The crew is now outside of the capsule, back down on the ground in Texas. They are hugging family, friends and colleagues.

"Best day ever!" Jeff Bezos could be heard shouting.

The mission was a success:

Our recovery team is headed out to meet Jeff, Mark, Wally, and Oliver for a celebration marking their return from space. Stay tuned to https://t.co/7Y4TherpLr for live shots from the capsule recovery. #NSFirstHumanFlight

Congratulations to all of Team Blue past and present on reaching this historic moment in spaceflight history. This first astronaut crew wrote themselves into the history books of space, opening the door through which many after will pass. #GradatimFerociter #NSFirstHumanFlight

The crew capsule is now returning to earth. Three main parachutes will slow its return. There are also three smaller chutes that come out earlier to help guide the ship. The capsule will touchdown at about 1 mph thanks to rockets that fire just before impact. Without those and just the parachutes, the impact would be about 16 mph.

Three chutes! The capsule is now descending with our crew at a comfortable 16 mph / 26 km/h on their way to touchdown in the West Texas desert. #NSFirstHumanFlight

Congrats, @blueorigin! "Our crew is now experiencing life-changing views of Earth from above the Kármán Line." #NSFirstHumanFlight https://t.co/52nq0Rn7er pic.twitter.com/zdbhddlcb6

Liftoff is just a few minutes away. There was a brief, normal, hold on the launch as crews cleared the site. The countdown has resumed for an estimated launch time of 8:10 a.m. Central.

"Jeff, Mark, Wally and Oliver are now getting into their seats, buckling up, and preparing for hatch close in advance of #NewShepard’s flight to space and back. #NSFirstHumanFlight" — Blue Origin

"Astronauts have climbed the tower and are preparing to ingress the #NewShepard crew capsule, RSS First Step." — Blue Origin, Twitter

"We are go for #NewShepard astronaut load. CrewMember 7 is now taking Jeff, Mark, Wally, and Oliver out to the launch pad." — Blue Origin, Twitter

"Blue Origin's New Shepard rocket will launch from a pad near Van Horn, TX.  Believe it or not, there were 2 Van Horns.  The wells of Van Horn, long used by native Americans, were 'discovered' by Maj. Jefferson Van Horne who later commanded at Fort Bliss in El Paso in 1849." — Bill Bishop, KHOU 11

The sun is rising. Soon so will #NewShepard #NSFirstHumanFlight Check out these mountains. Postcard perfect 🌄 @KHOU pic.twitter.com/axgROslUIY

"#NewShepard is on the pad. The launch team completed vehicle rollout this morning and final preparations are underway. Liftoff is targeted for 8:00 am CDT / 13:00 UTC."  — @BlueOrigin

#NewShepard is on the pad. The launch team completed vehicle rollout this morning and final preparations are underway. Liftoff is targeted for 8:00 am CDT / 13:00 UTC. Live broadcast begins at T-90 minutes on https://t.co/7Y4TherpLr. #NSFirstHumanFlight pic.twitter.com/oShmtRmA4n

@xmanwalton is LIVE this morning from Van Horn for the big launch at 8am. So excited that weather is cooperating! @KHOU Looks amazing!!!! Can't wait to see this LIVE! #KHOU11 pic.twitter.com/SHhb2MoE6a

KHOU 11's Xavier Walton reports there is a line of vehicles outside the launch site right now.

Line outside @blueorigin Launch Site One. These are employees showing up for work per a deputy w/ the Culbertson County Sheriff’s Office #NSFirstHumanFlight #NewShepard @KHOU pic.twitter.com/OSbCmk7xdT

Jeff Bezos, Mark Bezos, Wally Funk and Oliver Daemen all finished their training and are ready for Tuesday's launch.

Our astronauts have completed training and are a go for launch. #NSFirstHumanFlight pic.twitter.com/rzkQgqVaB6

Our news crews weren't the only ones who traveled from far away to catch the launch. Judy and Gilbert made the trip to Houston for it.

Just ran into Judy & Gilbert who drove all the way from #Houston to watch @blueorigin #NSFirstHumanFlight #NewShepard They questioned why it took @KHOUSergioSoto & I 12 hours to get to Van Horn. 🤣 pic.twitter.com/GST3yixBcQ

KHOU 11's Xavier Walton and Sergio Soto made the journey to West Texas for the launch. Here's that trip in 49 seconds!

Timelapse: Driving from the KHOU 11 studios in Houston to the @blueorigin launch site in West Texas! @xmanwalton and @KHOUSergioSoto are there for tomorrow's scheduled #NewShepard launch. Watch for their reports on #KHOU11 | #NSFirstHumanFlight #Texastakeoff pic.twitter.com/cMzfCeQUet

KHOU 11 reporter Xavier Walton and photojournalist Sergio Soto are in West Texas for the launch. Watch for their reports on KHOU 11 News in Houston. WFAA's Sean Giggy and Alex Rozier are also there. They're reporting for Dallas' WFAA.