When a young hospital patient started having a panic attack, a music therapist helped her calm down with the power of singing. 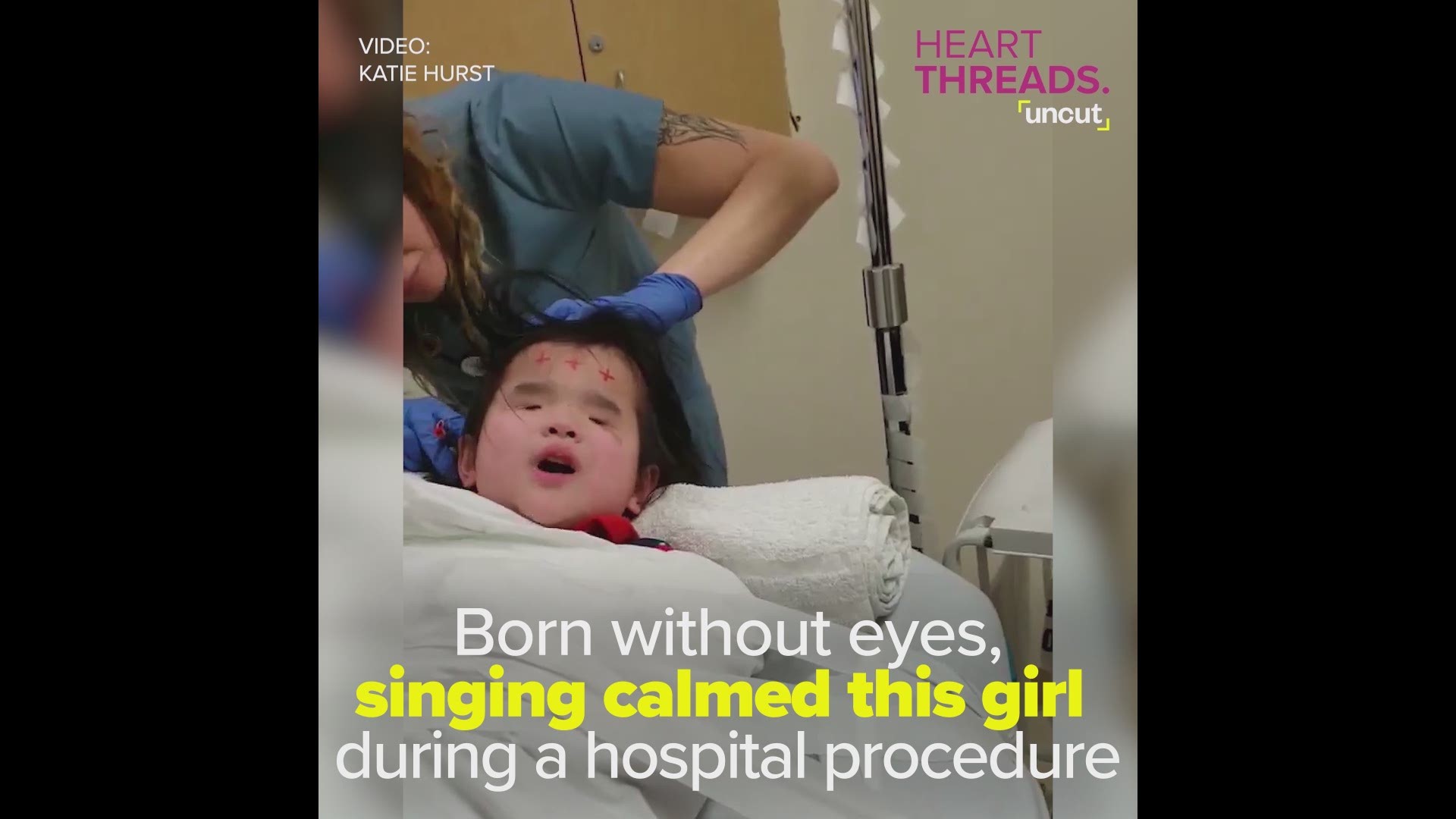 ANN ARBOR, Mich. — “You should know you’re beautiful just the way you are.”

The lyrics to pop singer Alessia Cara’s hit song “Scars to Your Beautiful” mean a lot to 8-year-old Evie Hurst. Evie knows all the words and loves when her mother, Katie, films her singing it.

“She is like a radio and just shuffles through songs to sing,” she said.

Music doesn’t just bring Evie joy, it can also calm her down when she’s going through a tough time, of which she’s had many.

Evie has anophthalmia, a condition that caused her to be born without eyes.

Katie and her husband, Craig, adopted Evie from China when she was 4 years old and weighed only 11 pounds.

“Evie was failing to thrive,” Katie said. “We almost didn’t make it to her in time,” she said.

Once Evie made it home, however, her health improved. Though she was reluctant to talk at first, her parents noticed how quickly she memorized songs.

They realized their daughter had a hidden talent.

Despite her progress, Evie continued to struggle with PTSD, due to trauma she suffered in her past. It was particularly hard for her to deal with doctors and hospitals.

In February, Evie needed a brain scan, called an EEG, because of suspected seizures, and her parents knew it would be difficult for her. Before even taking her up the elevator at C.S. Mott Children’s Hospital in Ann Arbor, Michigan, she was panicking. By the time she was in the procedure room, she was in “full fight or flight mode,” Katie recalled.

So Evie's mom suggested the medical staff bring in a child life team to help calm her daughter. When that didn’t work, she had another idea. She asked for a music therapist to come into the room to help Evie sing.

That's when music therapist Emma Wymer came to Evie’s side and encouraged her to sing “Scars to Your Beautiful.” Katie said Evie wanted her to capture the moment on video, which she later shared on Facebook.

The video showed Evie secured on a bed as staff prepare her for the procedure. She starts with a shaky voice, then gains confidence as Emma sings along with her and plays guitar. When Evie gets uncomfortable with the rubbing on her head, her support team encourages her to keep singing.

“She is just a strong, miraculous kid who never stops surprising us,” Katie said. “We are truly blessed by God that He allowed us to be her family.”

Evie's parents have set up a GoFundMe to help pay for her medical bills and music therapy. You can support her care here.