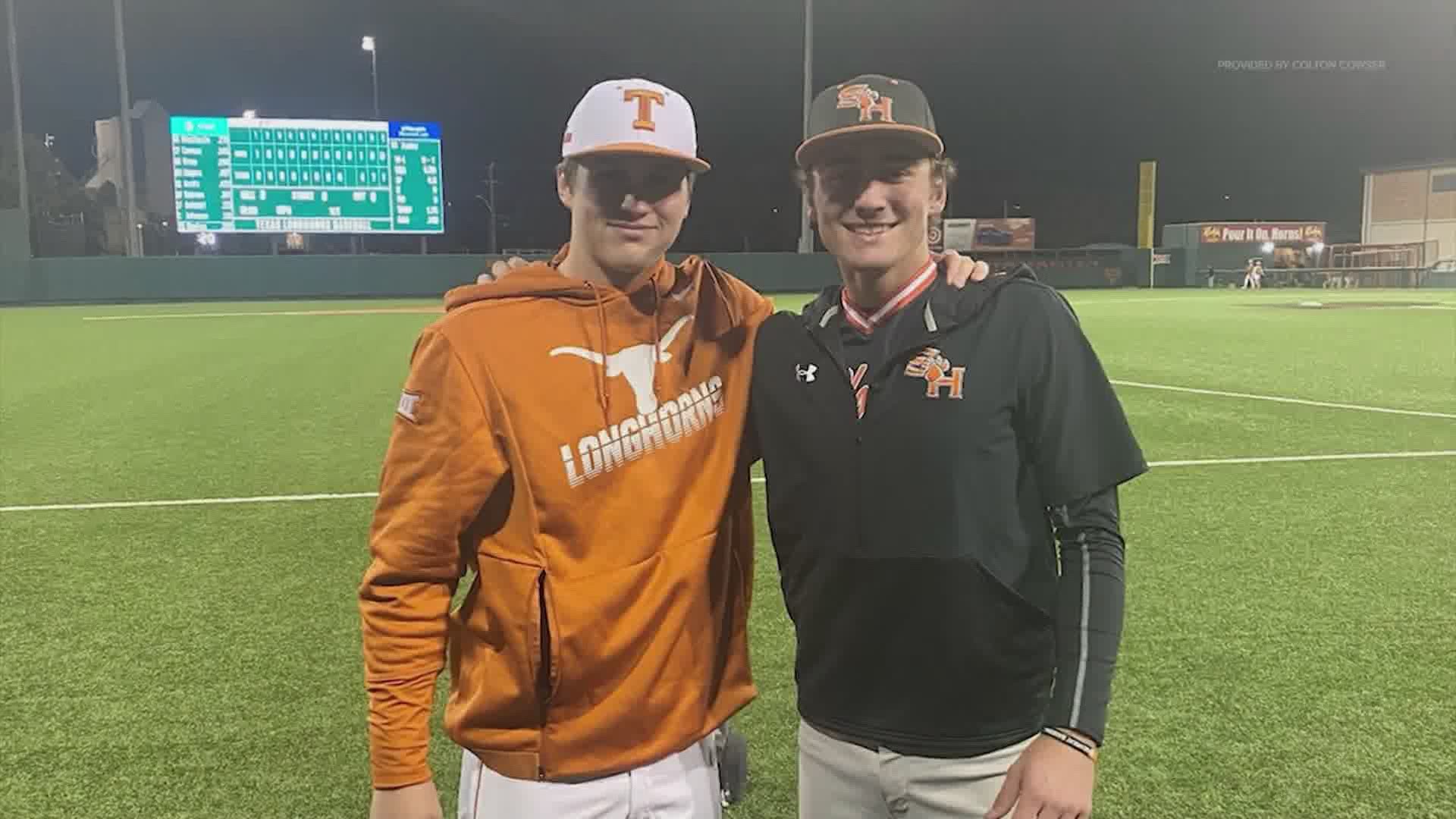 7/14 UPDATE — Colton Cowser was chosen No. 5 in the 2021 MLB Draft by the Baltimore Orioles — he is the highest player selected in Sam Houston and Southland Conference history, his school says.

Ty Madden was chosen No. 32 overall by the Detroit Tigers. Jim Callis at MLB.com says Madden is "a no-doubt starter for me."

The original version of this story, which aired before the draft began, follows

CYPRESS, Texas — One feasts on fastballs. The other fires them, hitting 99 miles per hour.

Texas pitcher Ty Madden and Sam Houston State outfielder Colton Cowser are two of the top pro prospects in the country at their respective positions.

But this story is less about their future and more about friendship.

“It's always a competition, (always) trying to push each other,” Madden said.

“You can tell he makes me better, and I make him better,” Cowser said.

Both attended Cy Ranch High School in Cypress. And now, most experts predict they’ll be among the first 20 players chosen in the Major League Baseball First-Year Player Draft, which begins July 11.

And this is where it really gets interesting: these two may be selected within one or two picks of each other.

Their friendship goes back even further than being high school teammates, the two told KHOU 11’s Jason Bristol.

“We've been best friends since like eighth grade,” Madden said last May on a Zoom call through the University of Texas.

“We ended up playing on the same summer team going into freshman year,” Coswer said last December, “so we've been we've been tight ever since.”

During the pandemic – with no games to play – they trained together.

“We put together kind of these live at-bats, just on our own at a field, every Friday,” Cowser said.

“I think we help each other with just visual things as well,” Madden said. “Like, I kind of tell him how I would approach him and what I see and his stance and at-bats, and he'll kind of stand in on some of my pens and sides and see what pitches pop and what he sees from a hitter’s perspective. So that was definitely huge.”

How legit is Madden’s stuff?

Those summer workouts are paying off this spring. Coswer, the slugger, was a first-team All-American.

“His bat-to-ball skills are as good as anybody I've been around,” said Sam Houston State coach Jay Sirianni.

Madden, the ace hurler, was a first-team All-American as well.

“His biggest leap forward was his command,” Texas coach David Pierce said. “Just having the ability to really stay in the strike zone.”

Madden finished with a 2.45 ERA in 113.2 innings pitched and struck out 137 batters, the most by a Texas pitcher since J.P. Howell in 2004, according to Texas Athletics. Madden also held opposing hitters to a .188 batting average.

Cowser finished the year with a slash line of .374/.490/.680, along with 16 home runs and 52 runs driven in. He ranked in the top five in the Southland Conference in batting average, slugging, on-base percentage, runs, hits, RBI and home runs.

Each one is strengthening his status as an elite prospect ahead of the draft.

“We put in the work and I think that it's starting to show,” Cowser said.

“We've grown up dreaming of this,” Madden said. “I think it's going to be exciting.”

Which one will be chosen first in the first round?

During another friendly competition, there’s a winner and a winner.