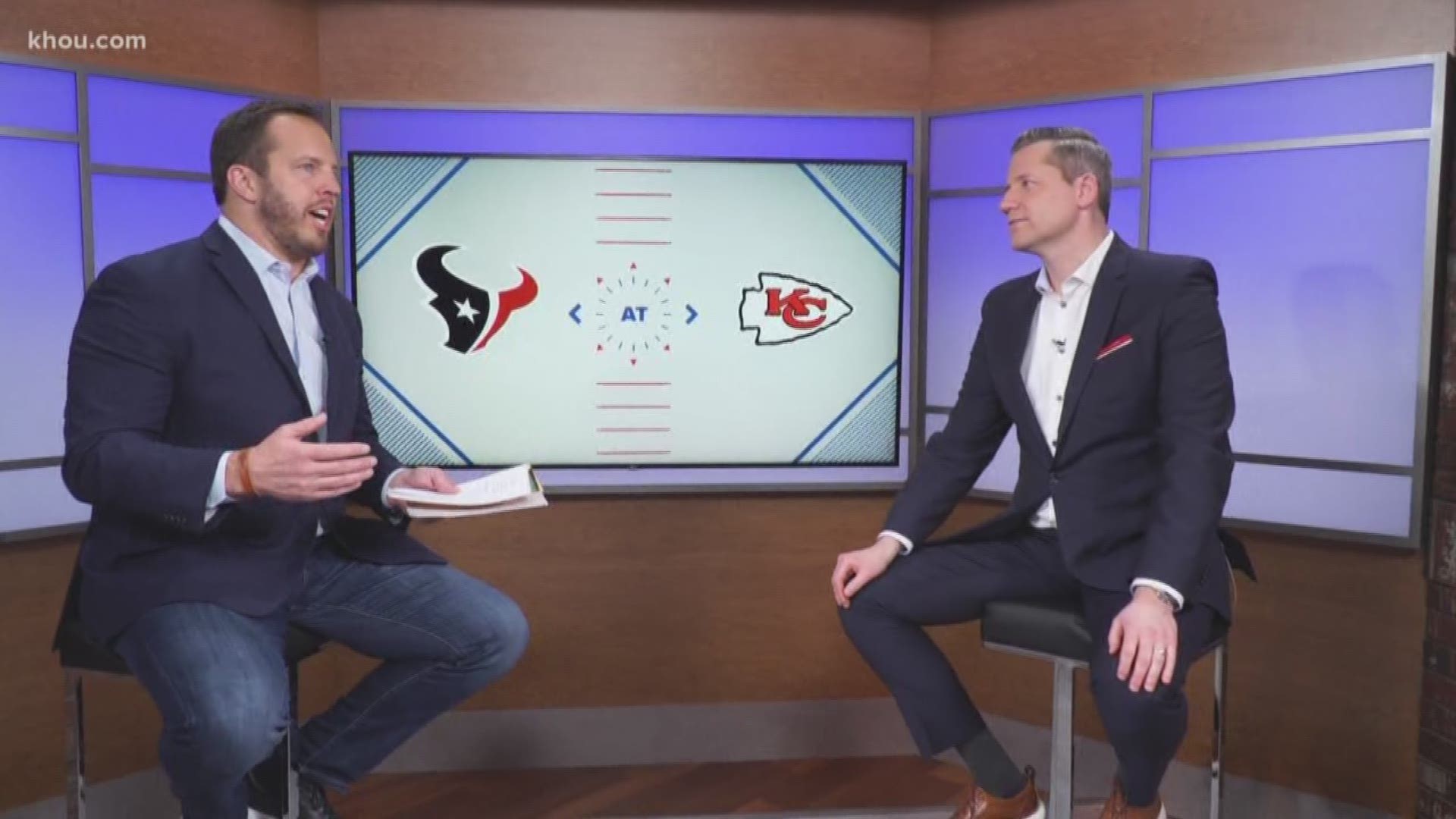 HOUSTON — The Kansas City Chiefs overcome a 24-0 hole early in the second quarter to beat the Houston Texans 51-31 on Sunday and return to the AFC championship game.

Patrick Mahomes led the comeback, which at one point included 41 unanswered points, by throwing for 321 yards and five touchdowns. Travis Kelce and Damien Williams scored three times apiece for Kansas City, which needed the biggest comeback in franchise history to continue its pursuit of its first Super Bowl trip in 50 years.

Deshaun Watson had 388 yards passing and accounted for three touchdowns for the Texans.

Below are the key plays from the game.

Texans fans have started to clear out of The Rustic.

0:24: Watson scores a rushing TD after hitting Will Fuller on a 39-yard pass. This is the first Texans points since 10:58 in the second quarter, when they kicked a field goal to take a 24-0 lead over the Chiefs. Texans cut into Chiefs lead, 41-31.

4:39: Chiefs tack on another TD after a several defensive penalties. Damien Williams scores his second rushing TD and third overall for the game, The Chiefs have scored six straight TDs and now lead, 41-24.

11:24: Chiefs add another TD while scoring on the opening possession of the second half. Damien Williams score on a short run. Chiefs miss extra point. Chiefs lead 34-24.

13:25: Sammy Watkins get the Chiefs off to a hot start in the second half.

Can the Texans get it back on track?

The Chiefs will get the ball first in the second half.

0:44: The Chiefs have taken the lead after scoring 28 unanswered points in the second quarter. Patrick Mahomes finds Travis Kelsey for a third TD catch. Chiefs lead 28-24.

On a positive note, Watson is now the Texans leader in passing yards in the postseason.

6:31: The Chiefs make it a 3-point game after Patrick Mahomes find Travis Kelsey again for a TD following the fumble recovery on the kickoff return. Texans lead 24-21.

7:56: What a turn of events. Chiefs fumble on kickoff return inside the Texans 10 yard line.

8:28: Texans fail to convert on punt fake and Chiefs take over at the Texans own 32.

9:55: Patrick Mahomes hits Damien Williams out of the backfield for a 17-yard score. Texans lead 24-7.

10:44: Mecole Hardman Jr. gives the Chiefs a spark with a kickoff return into Texans territory.

Even "King James" has something to say about the game.

01:21: Watson hits tight end Darren Fells for a TD after Texans recovered a muffed fumble by the Chiefs on their own 6-yard line. Arrowhead Stadium is stunned. Texans lead 21-0.

10:06: Linebacker Barkevious Mingo comes free up the middle for a blocked punt. Lonnie Johnson Jr. scoops it up for the score. Texans lead 14-0.

Deshaun the offense will take the field first.

Texans at The Rustic in downtown pumped for this playoff game.

Deshaun warming it up with his receivers in the cold temps at Arrowhead.

Good to see the defense loose and having fun before the game.

Pre-game wouldn't be the same without J.J. having fun with fans.

No surprises on the inactive list for the Texans. Jordan Akins will be missed.

Watt warming up before the game.

Our guys arriving for work.

Texans-Chiefs features a matchup of two of the top young signal-callers in quarterbacks Deshaun Watson and Patrick Mahomes. The two were selected just two picks apart in the 2018 NFL Draft with Mahomes being drafted at No. 10 and Watson at No. 12.

RELATED: Watson vs. Mahomes: How the young star QBs compare

Here's a look at the position matchups ahead of Sunday afternoon's playoff matchup.

These random facts about the Houston Texans and the Kansas City Chiefs are sure to impress your friends co-workers.