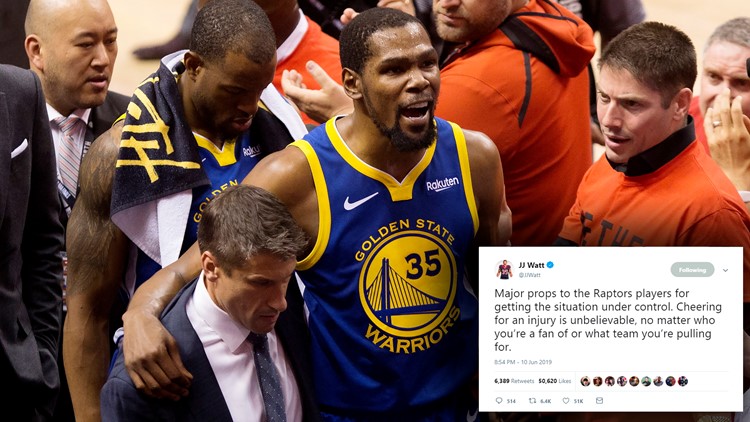 Photo by: AP
Golden State Warriors forward Kevin Durant (35) reacts as he leaves the court after sustaining an injury during first-half basketball action against the Toronto Raptors in Game 5 of the NBA Finals in Toronto, Monday, June 10, 2019. (Chris Young/The Canadian Press via AP)

Durant got hurt while dribbling on the right wing and fell to the floor. The star forward grabbed his lower calf towards the Achilles area and needed help to limp to the bench.

Watt, who has seen more than his fair share of major injuries, tweeted, “Major props to the Raptors players for getting the situation under control. Cheering for an injury is unbelievable, no matter who you’re a fan of or what team you’re pulling for.”

Raptors guard Kyle Lowry could be seen trying to tell fans stop cheering as Durant walked off the court.

Even Raptors super fan Drake tried to show the Warriors star some love as he left the court.

The season is likely over Durant who would have been one of the top free agents this offseason. He may now end up exercising his $31.5 million option to stay with the Warriors, especially if he's going to be sidelined for an extended period.

The Warriors went on to win Game 5, 106-105, it what was an elimination game for Golden State. The series is now 3-2 and returns to Oakland on Thursday.