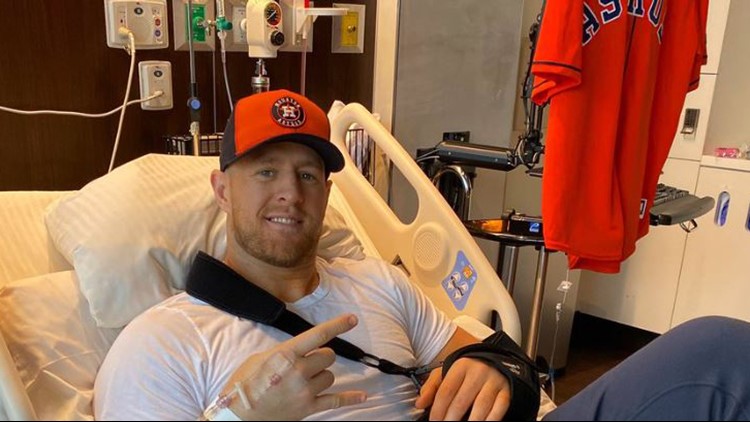 Photo by: JJ Watt/Twitter
J.J. just had surgery on a torn pec but he was ready to rep the Astros during Game 6 of the World Series.

'Blame it on the pain meds' | J.J. Watt is tweeting about the Astros from his hospital bed

HOUSTON — J.J. Watt had surgery on his torn pectoral muscle Tuesday but he seems to be in good spirits.

"Everything went smooth with the surgery, thank you for all of the kind words," Watt tweeted.

He shared a photo from his hospital bed sporting an Astros cap. An Astros jersey was hanging next to the bed but Watt is in a sling so he probably won't be putting on.

He said he's definitely watching the Astros try to #TakeItBack against the Washington Nationals in Game 6.

"If I tweet anything crazy during the Astros game tonight, just blame it on the pain meds," Watt tweeted.

Before the surgery, Watt sent a good luck gift and a sweet note to Jose Altuve.

Watt will be out for the rest of the season after suffering the injury the injury during a win against the Oakland Raiders Sunday.