The Traveling Texans made the trip to London to cheer on the Texans against Jacksonville. 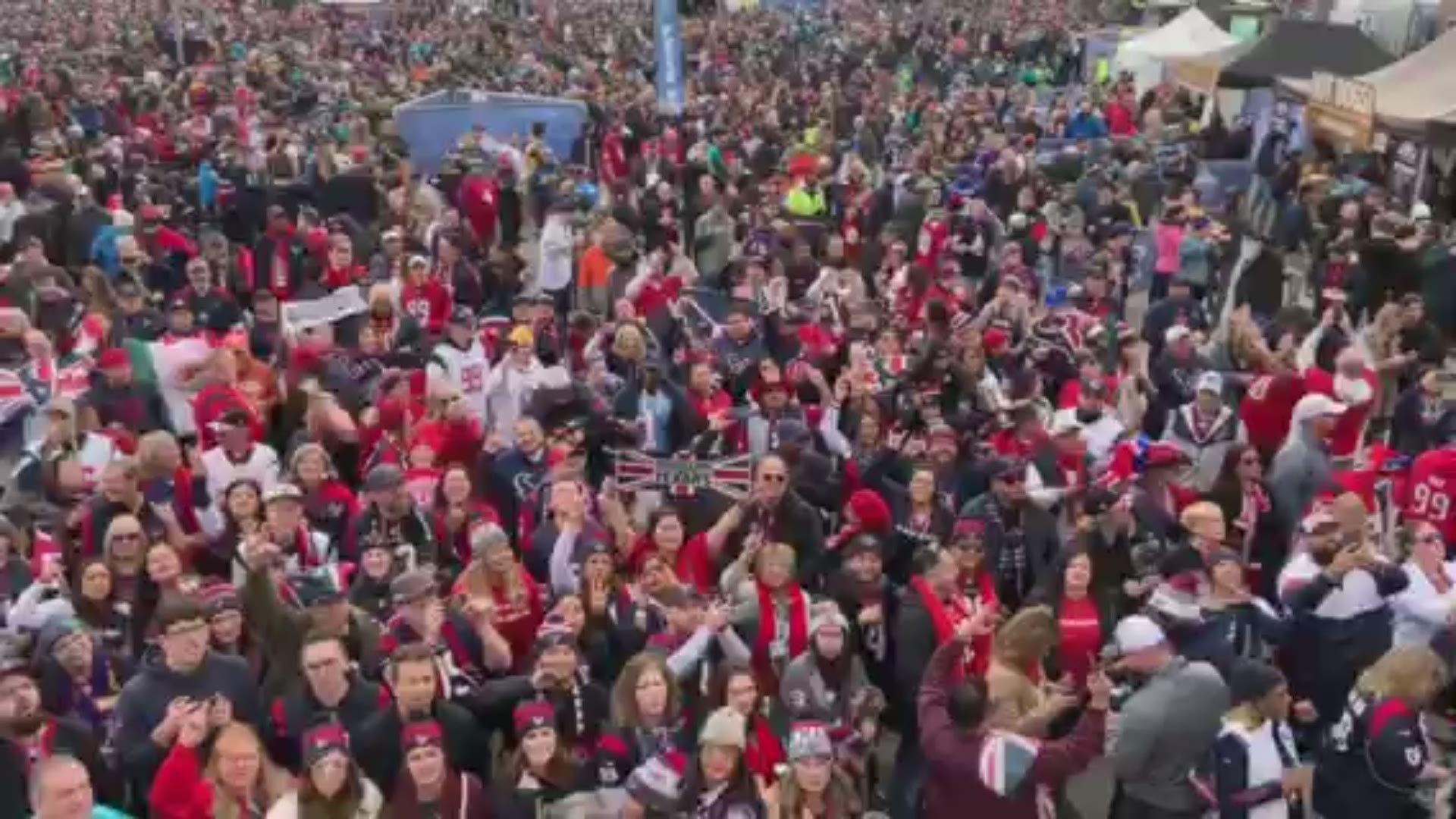 LONDON, UK — For the first time in team history, the Houston Texans played a game in London.

Houston took on the Jacksonville Jaguars, and while you might think there wouldn’t be that home crowd at a game 4,800 miles away, think again. The Traveling Texans made the trip across the pond to cheer on Houston against the division rival Jacksonville Jaguars.

Deshaun Watson's most impressive throw Sunday went backward - a flip under pressure to running back Carlos Hyde, whose 7-yard gain set up Houston's first TD in a 26-3 runaway over the Jacksonville Jaguars.

The rugby-style pitch was spot-on perfect for a game in London, where the locals are still recovering from England's 20-point loss in the World Cup final on Saturday, and now must deal with the added insult of watching their adopted home team, the Jaguars (4-5), getting hammered just as badly.

But more than anything, the Watson-to-Hyde connection was indicative of both players' days in general: They were very hard to stop.

Hyde finished with 19 carries for 160 yards for the Texans (6-3), including a 58-yard run that looked headed for a touchdown until Jags safety Jarrod Wilson stripped the ball at the 2.

Watson, meanwhile, finished 22 for 28 for 201 yards and a pair of 1-yard touchdown throws, along with 37 yards running. He did it all with his left eye still swollen and red, a week after getting kicked in the face just before throwing the winning touchdown pass against the Raiders.

Jaguars linemen Taven Bryan and Yannick Ngakoue were swarming Watson as he dropped back to pass in the second quarter with the Texans on the move. Seeing nothing downfield as the linemen closed, Watson instead flipped one back to Hyde, who took it to the Jacksonville 7.

Two plays later, Watson tossed a 1-yarder to Darren Fells for a 9-0 lead.

In the third quarter, Hyde ripped off a 48-yard gain in a more traditional fashion - finding nothing but air on the right side of the Jaguars line. Watson followed with a 21-yard strike to DeAndre Hopkins (eight catches, 48 yards), and Duke Johnson ran it in from the 1 for a 19-3 lead.

As for Minshew Mania - it could be over.

In his last start before Nick Foles comes off the injured list, Jaguars quarterback Gardner Minshew went 27 for 47 with two picks and two lost fumbles. Almost all of his 309 yards came during garbage time. It was not great film for coach Doug Marrone to review as he decides whether to keep the rookie in the starting spot.

Traveling Texans are taking over London!