Who are the 75 best players in Cleveland Browns history? Here are our picks for Nos. 11-25

We continue our look back at the most talented men ever to don the Orange and Brown. 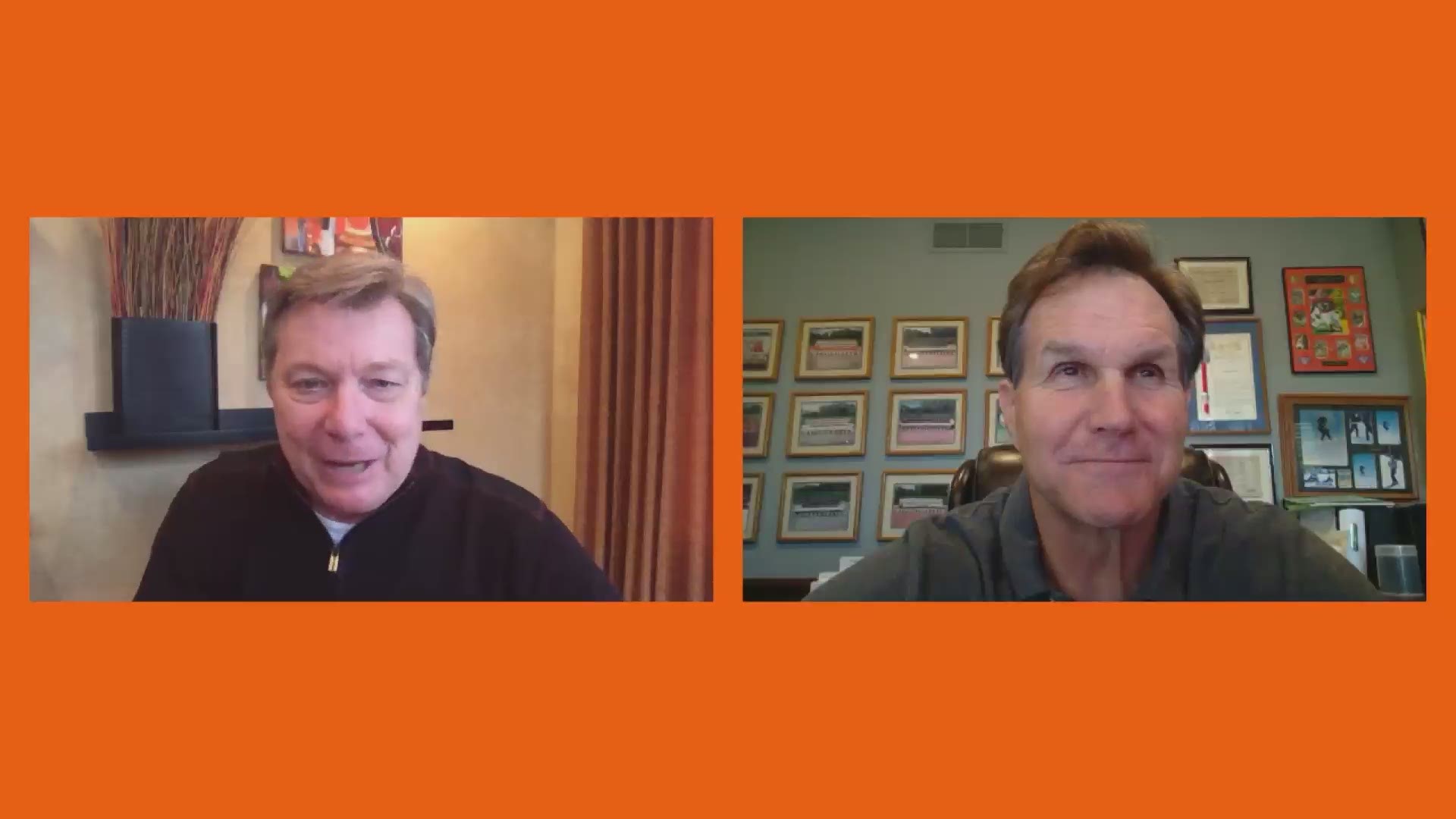 CLEVELAND — EDITOR'S NOTE: Select statistics and facts compiled from Pro-Football-Reference.com, ClevelandBrowns.com, NFL.com, and the NFL record book. Some other anecdotes referenced via link.

Over the last two weeks, we have been honoring the Browns' 75th anniversary by counting down the top 75 players in team history:

He's only in his fifth NFL season, but Garrett has already made a case as one of the best defenders Cleveland has ever seen. His 54 1/2 career sacks are already second-best (officially) in team history, and his 12 QB stops in 2021 currently lead the league, including a club record 4 1/2 in one game. A two-time All-Pro who is signed through 2025, it's seemingly not a matter of if Garrett will win a Defensive Player of the Year Award someday, but when.

If this were a list of the most-beloved Browns of all-time, Bernie would surely be No. 1, especially after the Boardman native maneuvered the system to make sure he landed with the team he grew up rooting for. The romance with the fans was virtually instant, and in his nine seasons the two-time Pro Bowler threw for 21,904 yards (third-best in team history) and 116 touchdowns (fourth-best) while guiding Cleveland to four division titles and three AFC Championship Games. Had it not been for injuries and a fellow named John Elway, he would likely be much higher on this list.

Credit: AP
FILE- In this Dec. 27, 1964, file photo, Cleveland Browns quarterback Frank Ryan salutes in dressing room as he talks with reporters after they defeated the Indianapolis Colts 27-0 in the NFL championship football game in Cleveland, Ohio.

Frank Ryan earned a Ph.D and was an assistant professor at Case Western Reserve University, which was fitting because he approached quarterbacking like a seasoned academic. He became a consistent winner in Cleveland following a unspectacular tenure in Los Angeles, winning three division titles and making three Pro Bowls as a starter while twice leading the league in touchdown passes. In the 1964 NFL Championship Game, he tallied 206 yards and three TDs and the Browns earned what remains their last world title.

Cleveland's "Top Dawg" for most of the 1980s, Dixon was a two-time All-Pro who intercepted 26 passes during his nine-year career. He was a true shutdown corner, but is perhaps best remembered for bestowing the "Dawgs" nickname on his teammates and "barking" during games, leading to the formation of the Dawg Pound. He also formed a lethal tandem with the next man on this list.

How often is it that a team gets two elite corners on the same defense? It's only fitting that Dixon and Minnifield are right beside each other on this list, but we had "Mighty Minnie" slightly higher. Despite his diminutive 5-foot-9 stature, the Kentucky native hauled in 20 interceptions during his own nine-year run, and helped Dixon coin the "Dawg Pound" moniker for the center field bleachers at Municipal Stadium. The four-time Pro Bowler is a member of the NFL's 1980s All-decade team, but remains one of just nine players from that group to have never even been a finalist for the Pro Football Hall of Fame.

Although his Browns tenure was much shorter than it should've been, the versatile Mitchell still made a lasting impact, rushing for 2,297 yards and putting up 1,462 more on the receiving end (10.3 yards per touch) for 32 total touchdowns. He also had six TDs as a returner and was a Pro Bowler in 1960, but would sadly be dealt to Washington two years later in a disastrous trade for Cleveland. He would become one of the NFL's most prolific receivers with the Redskins, and was eventually inducted into the Pro Football Hall of Fame in 1983.

An original member of the Browns, Gatski started off mostly as a linebacker (with three interceptions and a touchdown) before taking over as the starting center in 1948. All he did was make five All-Pro teams, start roughly 100 consecutive games, and help Cleveland win seven league championships. For his efforts, he was elected to the Pro Football Hall of Fame in 1985.

A calm and steady force on the defensive line for seven years, Glass is the Browns' unofficial sacks leader with 77 1/2 during his tenure, and added 1 1/2 more during the team's 1964 NFL Championship victory. A four-time Pro Bowler, he became an ordained minister after his playing career, and has been preaching his message of Christianity to prison inmates ever since.

Credit: AP
FILE - In this Sept. 16, 1950, file photo, Cleveland Browns' Mac Speedie carries the ball after a reception on a pass from Otto Graham in Philadelphia.

A prolific pass-catcher, Speedie was a six-time All-Pro who twice led the AAFC in receiving yards and yards per game (1947 and '49), and his career mark of more than 800 yards per season was an all-time record that stood for more than two decades. His 5,602 yards and 33 touchdowns are both still third in Browns history, but despite helping the team win five straight league titles, he was not elected to the Pro Football Hall of Fame until 2020 (27 years after his death), supposedly due to a rift with former coach Paul Brown.

Collins was the picture of consistency during his 10 seasons, catching 331 passes (second in Cleveland history) for 5,299 yards (fifth) and 70 touchdowns (first) while making three All-Pro teams and leading the NFL with 13 scoring grabs in 1963. Not only that, he was also the team's punter during his first six years, and even led the league with 46.7 yards per kick in 1965. He was a member of six Browns playoff teams, but it was his efforts in 1964 that forever made him a legend, when he "guaranteed" his team would beat the Baltimore Colts by three touchdowns in the NFL Championship Game. They did just that with a 27-0 win, with Collins himself catching all three TDs on his way to MVP honors (something else he guaranteed).

McCormack spent his first year as an All-Pro on the defensive line, picking off a pass during the regular season and later recovering a fumble in the Browns' 1954 NFL Championship triumph over the Detroit Lions. He was moved to right tackle a year later, making eight more All-Pro teams while helping Cleveland win another league title. He was inducted into the Hall of Fame in 1984, with Paul Brown calling him "the finest offensive tackle who ever played pro football."

Ford was a solid receiver in two seasons with the AAFC's Los Angeles Dons, but upon arrival in Cleveland Paul Brown moved him strictly to the defensive side. The Washington, D.C., native made the switch worthwhile with four All-Pro selections and three NFL titles (including two interceptions in the 1954 game), earning him induction into the Pro Football Hall of Fame in 1976. Sadly, he would not live to see his enshrinement, having died four years earlier of a heart attack.

Only Lou Groza played more games for the Cleveland Browns than Clay Matthews Jr.'s 232, and the son of Palo Alto, California, made the most of every single one of them. Over 16 seasons, he became the Browns' official leader with 62 sacks (75 unofficially) while also leading the NFL in tackles three times (the NFL didn't begin keeping track of the statistic until the 1990s). The four-time Pro Bowler was the best player on a defense that led Cleveland to seven playoff appearances and three AFC Championship Games, and his father as well as two sons both played professional football. His brother Bruce is even a Hall of Fame offensive lineman, but unfortunately, the nod has not yet come for Clay Jr.

What else is there to say about J.T.? The man was the definition of a rock during his time on the lakefront, never missing a snap from his rookie year until his final game. The streak of 10,363 consecutive plays is believed to be an NFL record, and he gave the Browns no reason to take him out with 10 Pro Bowl and eight All-Pro selections. In what will forever be one of sports' biggest travesties, Cleveland went a miserable 48-128 during his tenure, with just one winning season and zero playoff games. Despite being surrounded by inferior talent, the blindside blocker's love for the only team he ever knew remains unshakable, and he is considered a lock to one day be enshrined in Canton.

As long as football is played, there may never be a better Browns right guard than Gene Hickerson, who mastered the position over parts of three different decades. A seven-time All-Pro and 1964 NFL champion, he blocked for Hall of Famers Jim Brown, Bobby Mitchell, and Leroy Kelly when all were in their primes. When he himself was finally inducted in 2007, the defining image from the ceremony came when Hickerson was wheeled up on stage to lead the trio one final time.